UPDATE:  8/31/18 8:30 PM  -- "AB813 will not be moved to the Senate Floor for a vote this year,” said Senate President Pro Tem Toni Atkins tonight. The power grab is dead for this legislative session.

Consumer Watchdog president Jamie Court commented. "This proves that the job of the next governor and the legislature will be protecting California environmental and consumer protection laws from federal preemption by Trump appointees at FERC, not embracing new speculative schemes for Western electricity trading that put our state at risk.  If Jerry Brown couldn’t sell this with hundreds of bills under his pen, no one can.  The Western market is a dead concept until we are assured that our consumer protection and environmental laws are safe from assault under the commerce clause and by federal regulators." 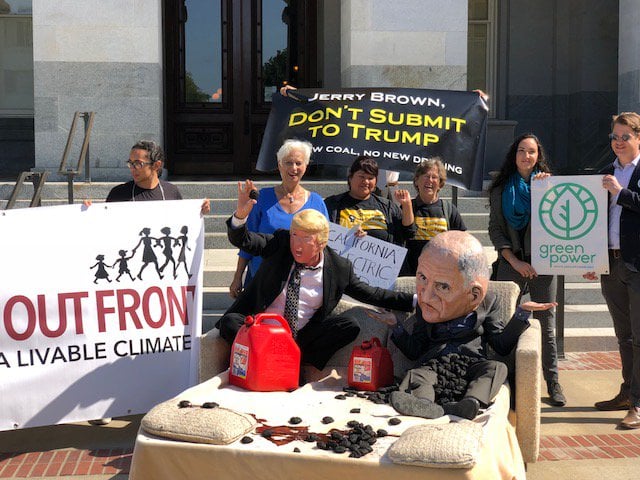 SACRAMENTO, CA — Environmental and consumer advocates today urged Governor Jerry Brown to resist the threat of a Trump takeover of the California electricity grid and to also oppose Trump’s plans to frack and drill California. A western regional electricity market would subject Californians to increased power imports from coal-heavy states and higher bills from speculation on power contracts, in a regional grid under the oversight of the Trump administration. The California Senate appropriations committee has until Friday to take action on a bill, AB 813, to fold California into a western market, or let the bill die.

Representatives from Food & Water Watch, Consumer Watchdog, Mothers Out Front, Rootskeeper, Greenpower, and the California Alliance for Community Energy challenged Brown to drop his support for the bill.

“If Brown hands over control of California’s electric grid to the Trump administration, he will lose all credibility as a leader on climate change,” said Adam Scow, California director of Food & Water Watch. “Instead of keeping us dependent on fossil fuels, the Governor should begin to phase them out, starting by stopping all new oil drilling permits in California.”

The event on the Capitol steps featured actors playing Brown and Trump laying together in a bed full of coal and oil in front of a large banner that read, “Jerry Brown: Don’t Submit to Trump, No More Coal, No More Drilling.”

“Creating a regional western power market out of California’s grid means coal, natural gas and oil-friendly Trump appointees at the Federal Energy Regulatory Commission will be in charge of a regional power market under which California would fall,” said Consumer Watchdog advocate Liza Tucker.

“These appointees include a former executive for billionaire investor Warren Buffett who wants to extend the lives of his western coal plants by selling dirty power into our market, a Keystone Pipeline supporter who pushed for pulling out of the Paris climate agreement, and a top corporate lawyer who represented Wall Street firms and oil companies before FERC, the agency he now chairs”, said Tucker. “I have a bridge to sell anyone who thinks that FERC wouldn’t hesitate to slap down California’s green laws if they disadvantage fossil fuels.”

The action came a few weeks ahead of an international climate summit that Brown is hosting in San Francisco, ostensibly to demonstrate American action on climate change in spite of Trump, whom Brown frequently criticizes for ignoring climate change. Since Brown assumed office in 2011, his state regulators have issued 20,000 new drilling permits, including new permits for drilling in offshore state waters. Nor has Brown banned fracking, though New York Governor Andrew Cuomo banned fracking with the stroke of his executive pen in 2014.

Last year, Cuomo and the Governors of Delaware and Pennsylvania, voted in favor of drafting up regulations to permanently ban fracking for oil and gas in the Delaware River Basin. In California, pressure from Occidental Petroleum on Governor Brown led to the 2011 firing of two diligent oil and gas regulators who tried to impose safety standards on oil drilling. The result was the injection of drilling wastewater into thousands of federally-protected state aquifers.