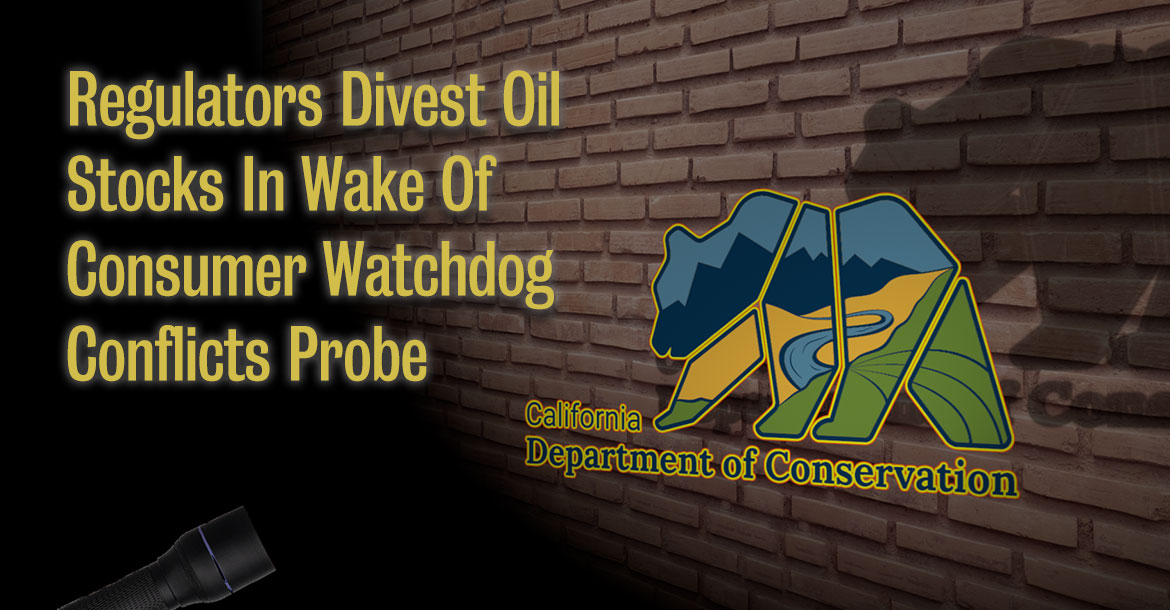 Los Angeles, CA — Oil and gas regulators at the California Geologic Energy Management Division (CalGEM) no longer hold oil stocks or other interests in the sector that they regulate in a radical departure from past practices, Consumer Watchdog said today.

A new conflict of interest policy at the division’s parent agency, the Department of Conservation (DOC), now prohibits such investments without explicit written approval by DOC’s director.

One year ago, Consumer Watchdog and FracTracker Alliance revealed that seven regulators held up to $100,000 worth of oil company stocks, some in companies they regulated. An eighth ran a consulting business. A review of financial conflict of interest forms for 2019 by Consumer Watchdog found the regulators had divested their stocks and closed the consulting business.

“We applaud the DOC for cleaning up CalGEM,” said Consumer Advocate Liza Tucker. “Oil and gas regulators should not be invested in any aspect of the industry that they oversee, period. The new policy also prohibits investments by regulators at other DOC divisions into businesses that relate to regulating land resources and mining. This policy should be adopted by all state regulatory agencies.”

The new policy prohibits employees from owning or controlling financial interests in the market sector regulated by the employee’s division within DOC, whether the business operates in California or not. CalGEM employees, for example, may not invest without written permission from the DOC Director in businesses whose activities include exploration, extraction, processing, refining, retailing, or recycling hydrocarbon or geothermal resources.

Government Code Section 87100 prevents officials from making decisions that affect their personal financial holdings. David Gutierrez, Deputy Director for Programs at DOGGR, disclosed stock worth up to $100,000 in Exxon Mobil, a parent of AERA Energy. Aera had received 448 drilling permits in the first half of 2019, the second most after Chevron.

Gutierrez was the highest-ranking civil service employee under the State Oil & Gas Supervisor. He was chief policy maker over the Division’s statewide programs, including but not limited to enforcement, deserted and idle wells, and fracking permits.

Consumer Watchdog and FracTracker Alliance referred Gutierrez and Thomas Goeres, a senior oil and gas engineer supervisor, to the Fair Political Practices Commission (FPPC). The FPPC opened a formal investigation into possible conflicts of interest. That investigation is still ongoing.

Gutierrez departed CalGEM in November. Prior to his departure, he no longer reported stock ownership in oil and gas companies. Goeres left CalGEM in February 2020 and joined the TerraCore Operations oil company that operates in Santa Barbara County’s Cat Canyon, according to his LinkedIn profile. He divested his oil and gas stocks in 2019, according to a leaving office form filed with the DOC.

Consumer Watchdog chart of regulators identified as having financial conflicts in 2018: 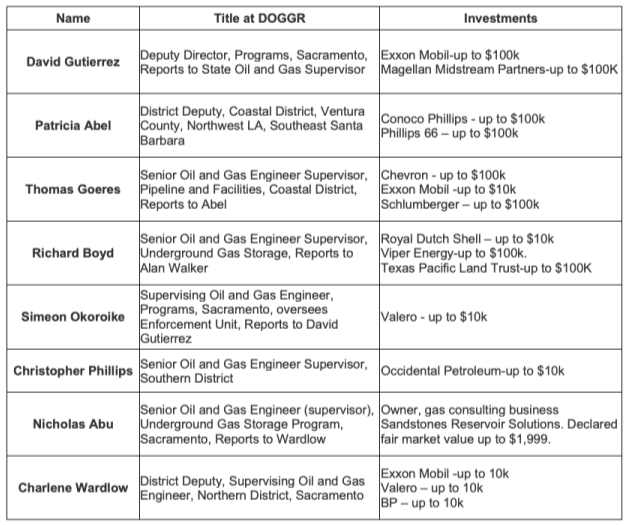 This year’s review of CalGEM regulators’ financial conflict of interest forms for 2019 revealed an additional engineer, Mae Soe, had held up to $100,000 in Halliburton and up to $10,000 in Schlumberger stock. She divested those stocks during 2019.  Another engineer, Scott McGurk, declared on his 2019 form an Occidental Petroleum 401k of up to $100,000.  McGurk previously worked at Occidental, Plains E&P, and Unocal, according to his Linked In account.

Half a dozen engineers left CalGEM between last July and the present, according to the DOC. That included Goerez and Gutierrez.  Another engineer, Max Solanki, also left CalGEM for TerraCore at the beginning of 2020, according to Solanki’s Linked In profile. Solanki previously worked for California Resources Corp., an Occidental spinoff, Occidental Petroleum, Aera, and Schlumberger before joining CalGEM. Solanki’s leaving office form reported no oil and gas investments.“The revolving door between industry, government, and back again is well-oiled,” said Tucker.

Last July, Consumer Watchdog and FracTracker Alliance also released data showing a major jump in permits for new oil and gas wells under Governor Newsom over the first six months of Jerry Brown’s last year in office in 2018. CalGEM had issued more than a third more new oil drilling permits than under Brown. Out of the new drilling permits issued, 45% benefitted oil companies invested in by CalGEM officials. Fracking permits had jumped 103%.

The very next day, Newsom fired the then State Oil & Gas Supervisor and called for an ethics review of the division. Thereafter he replaced Brown Administration holdovers--the DOC Director and Chief Deputy Director.

The new State Oil & Gas Supervisor, Uduak-Joe Ntuk, declares no investments in oil and gas. He was formerly the petroleum administrator for the City of Los Angeles. Prior to that, Ntuk held other local government positions and worked for Chevron from 2006 to 2011 as a reservoir and a production engineer. David Shabazian, the new director of the DOC, also has no oil and gas investments.  William Bartling, Chief Deputy in charge of field operations appointed by Brown, remains. He previously worked for Chevron for 14 years and also reports no oil and gas investments.