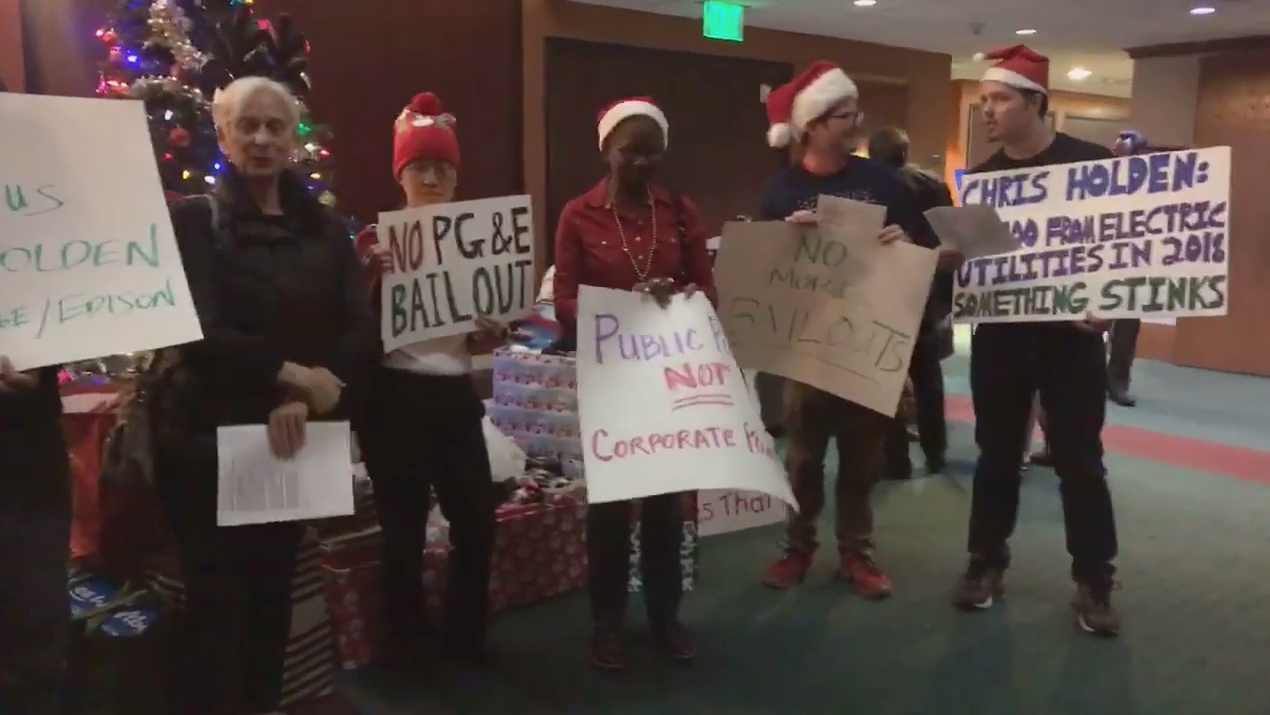 Assembly Member Chris Holden is the point man for Pacific Gas and Electric on its legislative bailout plans over the 2018 fires. That's why we paid his holiday party a visit.  Watch us sing Chris Holden our holiday carols.

First, we carolers had to convince some beefy Pasadena police that we didn’t come to Assemblyman Chris Holden’s Christmas open house at his district office to disrupt the festivities and dirty up the place (though we did leave a lunch bag of coal behind).

Next, we tried to find Holden to sing him our creatively-adapted lyrics That was more of a challenge as he wasn’t in the main buffet area, instead he was tucked into a tent out back.

We went to warn Holden, who helped craft and voted for a giant utility wildfire bailout for 2017 fires in the last session, that his plans afoot for another utility bailout in the new session, for 2018 fires, were unacceptable.  Pacific Gas & Electric faces billions in potential liability for destructive and deadly fires in Northern California in the last two years.

In the last legislative session, utilities didn’t get all they wanted. They won the outrageous right to pass through to ratepayers billions in costs from wildfires sparked by their equipment, including in instances of negligence as long as the Public Utilities Commission rubberstamps that.

What they were really after but failed to get because of staunch opposition from wildfire victims, advocates, consumer attorneys, and insurers, was the decimation of a consumer’s right to utility reimbursement for the costs of wildfires that their equipment sparks, instead of honoring the state constitution.

In that compact, utilities get the right to seize your property to provide vital energy services. But that tidy monopoly comes with the responsibility to pay you back when fire they cause wipes out your property.

That’s a fair deal we fought to preserve, but what we also need is a Green New Deal. Break up negligent, monopoly utilities that want to privatize profits and socialize the costs. Help independent green energy purchasing and delivery expand. Chris Holden is in the way.

Holden is the third-largest recipient of utility largesse in the Assembly, having taken $80,550 in contributions from the state’s three investor-owned utilities, Pacific Gas & Electric, Edison, and Sempra since Jerry Brown was elected Governor in 2011.

Last session, he sponsored a bill, foiled by environmental advocates, to hand California’s power grid over to Donald Trump and his federal energy appointees. That would have led to the overturning of California’s green energy laws and forced it to accept big coal power imports from the likes of Coal King Warren Buffett.

Our attempt to go carol in the big tent ended in a phalanx of police blocking our way while a Holden “political consultant” held us at bay. Staff finally got the message after we explained that the optics looked bad for Holden on our livestream feed.

Santa Holden (To the tune of Santa Baby)

Your bailout bill is really so bad, so sad

They just need to go broke, we spoke

You have a chance to do the right thing, we sing

Public power is great, we state

Think of all the fees we ditch

Instead of making shareholders and CEOs rich

You have a chance to save the day

So, break up those bastards and make them pay

Use your office for good, you should

Listen to the people right now

Listen to the people right now.