WOMEN are disproportionately harmed by outdated limits on the ability of injured patients to recover damages. California’s cap on compensation for “non-economic” or quality of life harm prevents women from getting justice.

Medical injuries unique to women have long been undervalued. By virtue of being the sex that bears children, that remains outside the wage-earning work force or works fewer hours for less money when they raise them, and other results of women’s reproductive character, MICRA has a disproportionate impact on women who have been the victims of medical negligence. 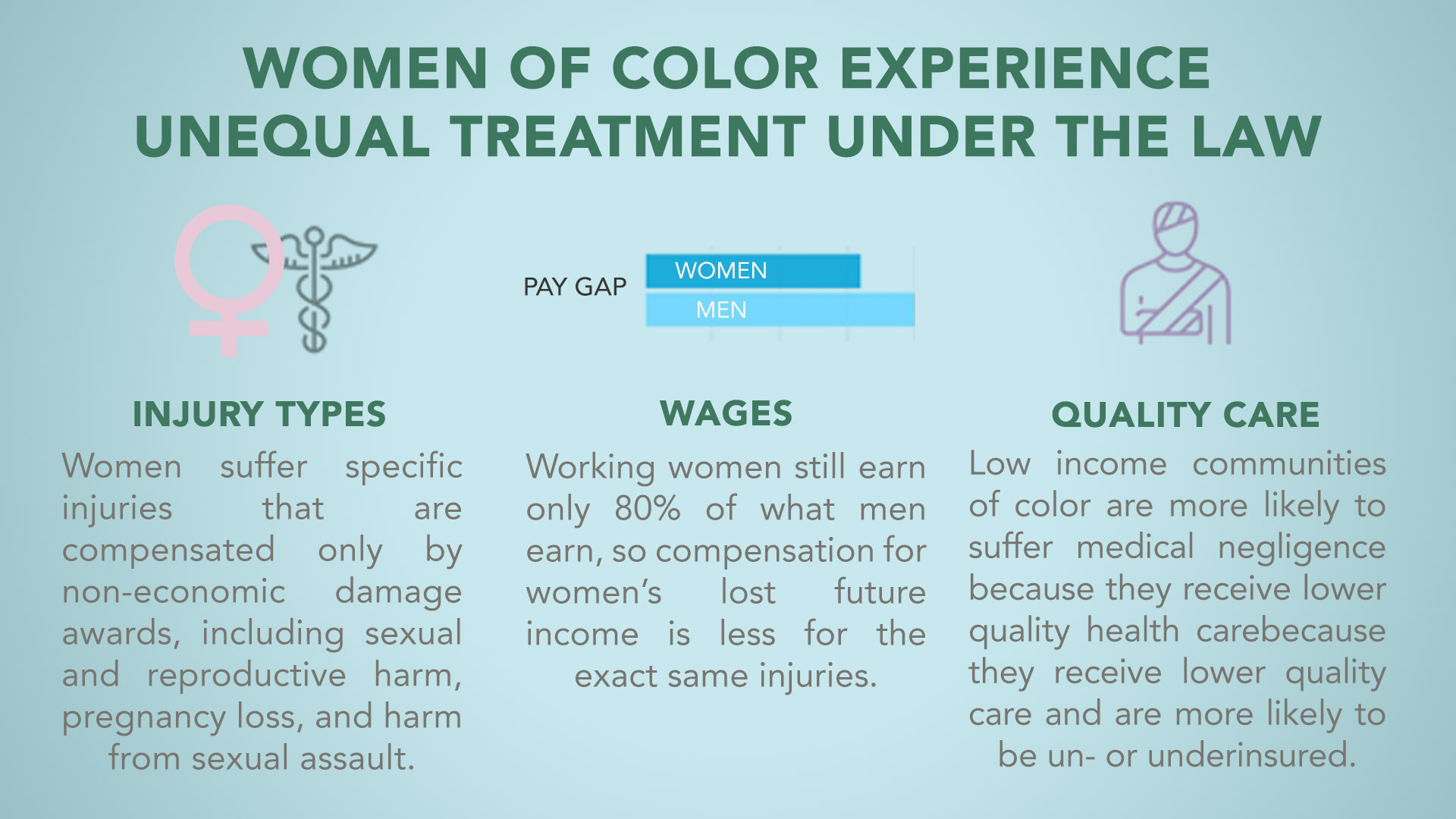 Much as the glass ceiling continues to undercut the incomes of working women, the malpractice cap on non-economic damages means compensation for those harmed by medical errors is largely determined by the income of the person who was injured. With working women still earning only 80% of what men earn, compensation for womens’ lost future income is less for the exact same injuries.

A stay-at-home parent or a parent who works only part-time outside the home is treated very differently under caps than someone who is working full-time at a high-paying job. The work of homemakers has no value under MICRA, and so no wage loss is awarded in the case of their deaths.

Women also suffer specific injuries that men do not and are more likely to suffer harm compensated only by “non-economic” or quality of life damage awards. These include sexual or reproductive harm, pregnancy loss, unnecessary mastectomy, and harm from sexual assault by doctors. The injuries they sustain, from impaired fertility to miscarriage, incontinence, scarring or disfigurement in intimate parts of the body, also have no “economic” value. These women are unlikely to have lost income, yet they have clearly suffered grievous injury. Such damage is considered “non-economic” and California’s cap limits compensation for these losses to an amount below what anyone would consider fair in 2020, regardless of the severity of the harm.

…certain injuries that happen primarily to women are compensated predominantly or almost exclusively through noneconomic loss damages. These injuries include sexual or reproductive harm, pregnancy loss, and sexual assault injuries. The impact of these injuries—impaired fertility or sexual functioning, miscarriage, incontinence, trauma associated with sexual relationships, and scarring or disfigurement in sensitive, intimate areas of the body—is not primarily on the economic wage earning aspects of life. Rather, the impact is more in terms of emotional suffering and self-esteem—an impaired sense of self and ability to function as a whole person, or damaged relationships. These priceless aspects of life hold little economic worth in the market, so market-referenced economic loss damages are ill-suited and inadequate to compensate for them.

…Consequently, any cap on noneconomic loss damages will deprive women of a much greater proportion and amount of a jury award than men. Noneconomic loss damage caps therefore amount to a form of discrimination against women and contribute to unequal access to justice or fair compensation for women.”