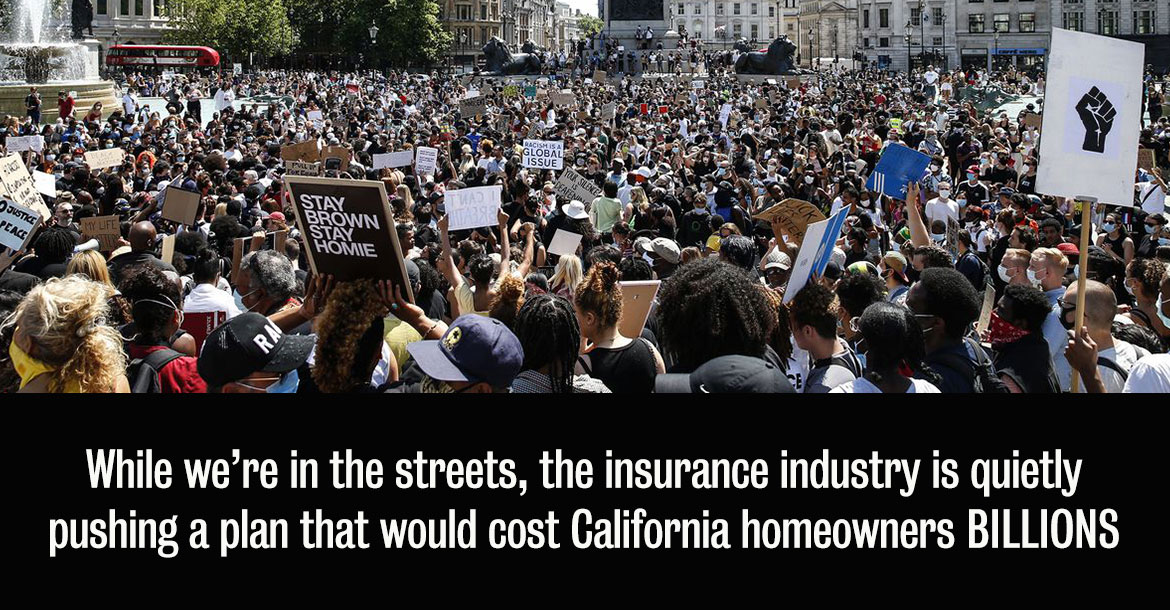 Los Angeles, CA – Consumer Watchdog warned today that homeowners could pay billions more for their home insurance under a sneak insurance industry legislative attack on California’s effective rate regulation under the cover of the corona virus and police abuse crises.

AB 2167 would allow homeowners insurance companies to hike rates as high as they desire by exempting them from the protections of California’s rate regulation law, voter-approved Proposition 103. The legislation rocketed through the Assembly Appropriations Committee late last week and passed out of the Assembly  Monday afternoon. It now heads to the State Senate for action.

“Under cover of darkness, in the midst of a pandemic and civil protests, the insurance industry is pushing through the California legislature a plan to loot California homeowners and renters,” said Harvey Rosenfield, the author of Prop 103 and founder of Consumer Watchdog. “At a time when homeowners can least afford it,  the insurance industry should not be able to buy its way out of accountability to the  elected insurance commissioner for the rates it charges.”

Proposition 103 requires insurers to open their books and get approval before rate increases take effect, and prohibits excessive, unjustified and unfairly discriminatory rates.

AB 2167 would override this prior approval system of rate regulation. It would require the Insurance Commissioner to approve rates even if they are excessive or violate other provisions of Prop 103, allow insurers to pass on to consumers the unregulated costs of reinsurance coverage, and fast-track the rate approval process no matter the circumstances.

Whole communities in and near wildfire zones are seeing their homeowners’ insurance policies non-renewed, while they have to fight to get insurance companies to pay their legitimate claims. AB 2167 would limit the Commissioner’s ability to prevent insurance companies from engaging in just these kinds of abuses.

A companion bill, SB 292 by Baldwin Park Senator Susan Rubio, would similarly preempt the Insurance Commissioner's authority to regulate wildfire "risk models," giving the insurance industry authority to use these “black box” models to set homeowners insurance rates and eligibility with no oversight. SB 292 does not take effect without AB 2167.  Rubio has received $158,000 from the insurance industry since 2017.

Prop 103 can only be amended by the legislature if the changes further its purposes. AB 2167 throws those purposes out the window. Because it is an illegal amendment to Prop 103, Consumer Watchdog will be forced to sue to invalidate it were it to be signed into law. The state will end up spending millions in legal fees to defend this unconstitutional gift to the insurance industry in the courts.

The last time Consumer Watchdog was forced to sue to invalidate an illegal legislative amendment to Prop 103 was in 2005. Governor Gray Davis signed legislation carried by Senator Don Perata, and sponsored by Mercury Insurance, that would have overridden the Insurance Commissioner’s authority to regulate rates and allow auto insurers to raise prices on low-income drivers who had a lapse in their coverage. Consumer Watchdog won that fight in The Foundation for Taxpayer and Consumer Rights v. Garamendi.

For more information, read Consumer Watchdog’s, and the Department of Insurance’s letters in opposition to AB 2167.