Raises Questions About Cleansing of Calendar and Role of Lena Gonzalez 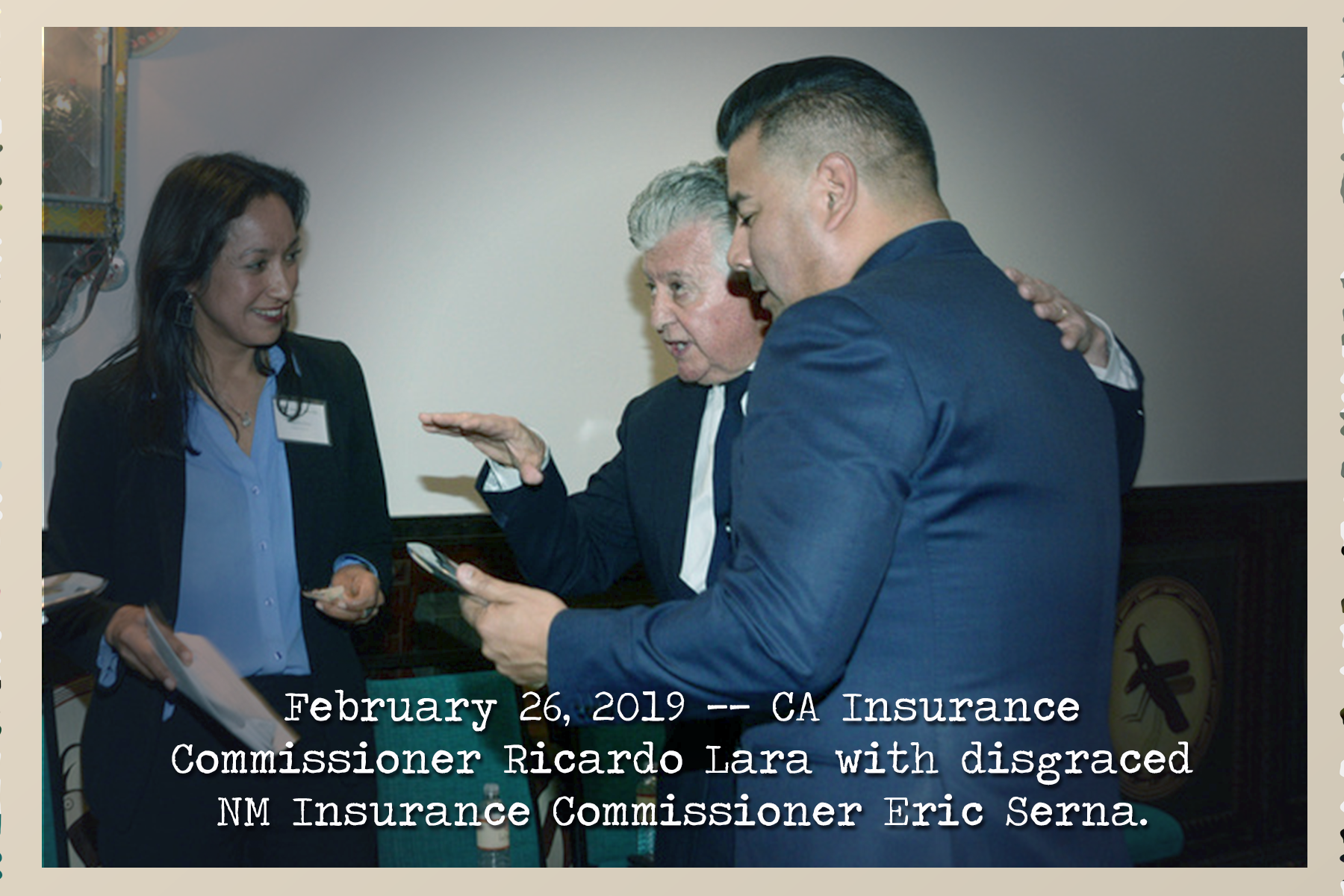 UPDATE: 9/20 Consumer Watchdog sent this letter to the California Attorney General and District Attorneys for Sacramento, San Francisco and Los Angeles along with the information below.

Los Angeles, CA -- Calendar entries, documents, and newly uncovered photographs reveal that Insurance Commissioner Ricardo Lara, not his fundraiser, made first contact with an agent of a workers compensation insurance company offering political support in conjunction with seeking approval for a change of control in the company.

New records, produced under the Public Records Act, appear incomplete and suggest Lara is not being fully forthcoming about his meetings. For example, the only email produced from Lara himself is one sent to Consumer Watchdog's president. Lara did not produce his texts, but a phone record from a Department official includes Lara's response approving a key meeting with principals in the scandal. Consumer Watchdog asked the Department to provide a privilege log of all the calendar entries and documents withheld to assess a potential Public Records Act challenge.

In addition, the records implicate a new political figure in the scandal, Lara’s handpicked-successor for his state senate seat Senator Lena Gonzalez.

Documents show that former New Mexico Superintendent of Insurance Eric Serna, who resigned in disgrace in the wake of a pay-to-play fundraising scandal, tried to broker Lara’s approval of the sale of Berkshire Hathaway-controlled California Insurance Company to his associate Steve Menzies, while offering fundraising and political assistance to Lara.

Serna is considered the Chuck Quackenbush of New Mexico. He resigned in 2006 as New Mexico Superintendent of Insurance under a cloud, including an attorney general investigation into a state contract Serna awarded to a Santa Fe bank that gave $129,000 to a charity that Serna founded. The chair of the state Public Regulation Commission cited “the continued entanglements with his private interests and his official duties” as the reason for his retirement.

Newly-uncovered photographs of a taxpayer-funded trip Lara took to New Mexico reveal Serna and Lara were together in late February in Santa Fe. The Santa Fe meetings were prior to March email communiques between Serna and Lara’s fundraising consultant, Dan Weitzman, that ignited the fundraising scandal and led to the firing of Weitzman and an apology from Lara. The photographs place Lara on the ground floor of the pay-to-play scandal with his arms around its kingpin, even though Lara claimed his fundraiser was to blame and he did not make the inappropriate overtures.

View a timeline of events: https://consumerwatchdog.org/sites/default/files/2019-09/LaraTimelineSept.pdf

Lara did not disclose the February contact with Serna in his Public Record Act release of his calendar of meetings Friday. Lara’s apology stated that “my campaign operation scheduled meetings and solicited campaign contributions that did not fall in line with commitments I made to refuse contributions from the insurance industry.” Yet, the photographs of Lara and Serna at an immigrant rights group event that Lara’s calendar notes he attended demonstrate Lara has not been fully forthcoming.

Evidence shows Serna arranged and attended March meetings with Lara and his staff including both the buyer and seller of the workers compensation insurance company to discuss the company’s change of ownership approval and fundraising for “relationship building” for the Lara 2022 campaign. Serna is general counsel for Nelson Taplin Goldwater Consultants (NTG), an insurance consulting group whose Chairman is Barry Goldwater Jr., where his associates, related entities and son donated $23,500 in 2018 to the Lara campaign, donations that Lara has not returned.

Department correspondence involving Serna from early March paint a troubling picture of the mixing of official decisions and fundraising. However, the newly released calendar and Public Record Act responses show that taxpayers paid for Lara’s travel to and lodging in Santa Fe, where Serna is based, from February 25th – February 27th, just days before the troubling March fundraising emails. Lara’s calendars list only two events for which taxpayers picked up Lara’s Santa-Fe bills: a celebration at an immigration rights group, Somos Un Pueblo Unido, and an insurance panel the next morning.

Photographs of the immigrant rights group event, uncovered from an event photographer’s online gallery, show Lara spent that evening arm and arm with Serna, who introduced him from the podium and gave him an award. See the photographs here: https://consumerwatchdog.org/ricardo-lara-pictures (A separate photo gallery from the same photographer show Serna as central figure in a July celebration with Steve Menzies.)

Serna appears to be connective tissue in the Lara scandal. According to the recently released calendars, Serna and Lara had dinner in New York on April 10th, six days before the questionable donations flowed to "Lara 2022" from associates and relatives affiliated with insurance companies, mostly related to Menzies.  Weitzman was also in New York and reimbursed by "Lara 2022" at the time. One mysterious donor not related to Menzies, Texas homemaker Darlene Graber, who gave $7800 to Lara, lives with Larry Graber, the head of an insurance company that sells "short term" health insurance policies banned in California. Lara's calendars state Serna met with Lara about "short term" health policies on January 30th and the April 10th dinner with Lara was with Serna and health insurers.

The fact that Lara flew to Santa Fe and met with Serna, just days before the unseemly March emails mixing Department decisions and fundraising began, suggest Lara, not Weitzman, was approached directly with a “pay to play” proposition. It also shows the release of Lara’s calendars, which were heavily expurgated, may not reveal the full picture of his actual dealings relevant to the fundraising scheme.

One day after Lara’s return from Santa Fe on March 1st, Lara’s fundraiser Dan Weitzman, Lara and his Department staff exchanged emails discussing meetings with the Menzies team about both fundraising and about California Insurance Company’s change of ownership. The pending change will have to be approved by September 30th according to Department statements.

On the same day, March 12th, information in a follow-up internal California of Department of Insurance (CDI) email thread describes “the highlights of what was discussed” in a meeting with staff members and is heavily redacted. Jeff Silver, a lawyer for the Berkshire-Hathaway subsidiaries, sent a follow-up email to Department employees saying “thank you for taking the time to visit with Eric, Steve Menzies and me concerning the soon to be filed Form A for California Insurance Company. We look forward to working with you and your staff to meet the September 30, 3019 deadline.” [Form A is the paperwork seeking Lara’s approval of the acquisition of Applied Underwriters by Steve Menzies and United Insurance.]

The contributions raise serious questions: Did Lara receive any of the money paid by Gonzalez to Weitzman? Did Steve Menzies, new owner of California Insurance Company in the pending sale, launder contributions through Gonzalez and board members of the interlocking companies in order to hide their true source and avoid campaign spending limits? Were the contributions intended to influence Lara’s approval of the pending sale, actions that would constitute a bribe under state law?

Gonzalez’s name surfaces again in an April 24th text message to Lara from a Department employee's phone (Lara did not produce his texts), seeking to schedule a lunch in May with "Lena Gonzales and Steve Menzies." Lara replies "OK." A subsequent May 1st email from Jamie Sahara CEO of Cayman Islands-based United Insurance, the buyer in the California Insurance Company deal, is the most vivid example of policy discussions alongside fundraising. Sahara’s company is in the middle of the Berkshire/Applied Underwriters/Menzies sale – as it entered into a stock purchase agreement with Berkshire to buy Applied & transfer control to Menzies. 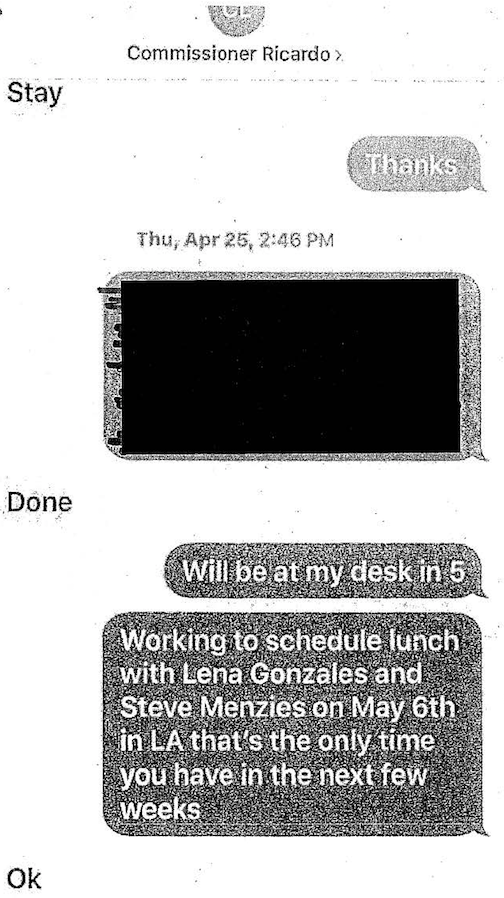 In the below email from a chain between Jamie Sahara, David Green Special Assistant at the Department of Insurance, and Dan Weitzman, Sahara discusses lunch (presumably the same lunch Lara received the text about) between Weitzman, Gonzalez, Menzies, Sahara and Lara :

“We would like to schedule two meetings with the Commissioner:

1. Formal policy discussion with the Commissioner to discuss the California Insurance Company.

2. Political meeting with the Commissioner, Lena Gonzalez, and Dan Weitzman”

While that one email suggests two meetings, only one appears to be scheduled. Records reflect a lunch meeting on May 6, 2019, from 12:00 – 2:00pm at NoMad in Los Angeles, with Steve Menzies & Jamie Sahara;  Dan Weitzman may also have been in attendance; multiple records appear to notify other people who may or may not have attended: Catalina Hayes-Bautista (Lara’s CDI chief-of-staff), Angela Lizarraga (formerly a member of Lara’s Senate staff), Roberta Potter (Lara’s CDI appointment scheduler).

Why Lara’s fundraiser, Weitzman, was involved in multiple meetings about official Department business is another troubling issue for Lara. It suggests that official Department decisions are being discussed simultaneously to fundraising and that one is being leveraged for the other.

In addition, at least four decisions were made by Administrative Law Judges against the workers compensation insurer Menzies sought to buy, then overturned in the company’s favor by Lara, in the midst of these meetings and email communications with the Berkshire-Hathaway team, and as contributions from them were flowing covertly through Menzies’ associates and their relatives.

“The new documents suggest state laws involving money laundering, bribery and misuse of public monies may have been violated, raising the stakes for a state prosecutor or the Attorney General to investigate this troubling circumstantial evidence and find out what was said and promised in these meetings,” said Jamie Court, president of Consumer Watchdog.

View the slideshow referred to in the press briefing below: https://www.consumerwatchdog.org/sites/default/files/2019-09/Lara%20Calendar%20Slides.pdf