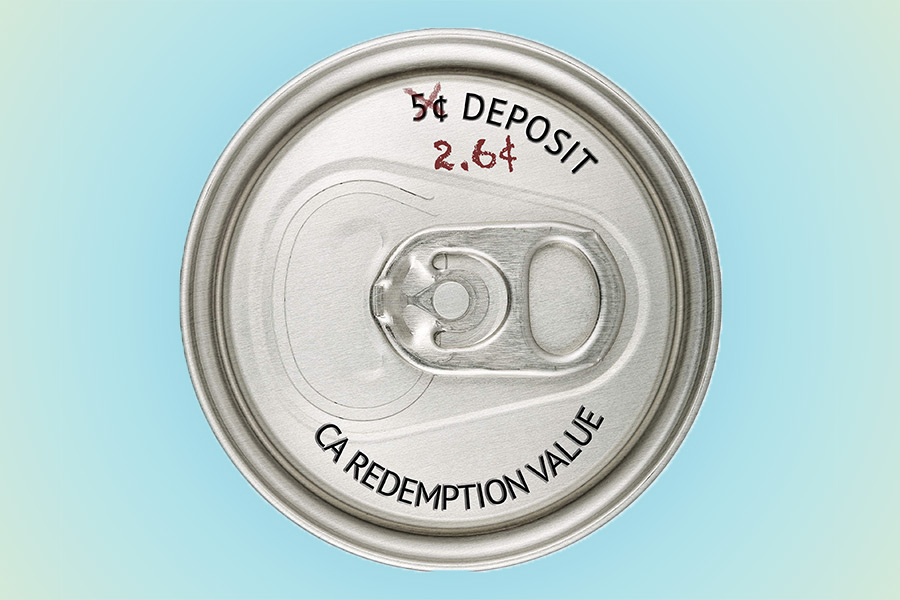 Los Angeles, CA—For every nickel bottle or can deposit that California consumers pay in the grocery store checkout line, they only get back 2.65 cents, or 53%, of their deposit, according to an investigative report on the state’s beverage container recycling system.

The report by the nonprofit group Consumer Watchdog finds that of the $1.5 billion consumers pay in deposits, they leave $732 million behind.

The three-month investigation pins the problem on lack of access to recycling centers and grocery stores that refuse to take empties along with state payments and policies that benefit politically-connected trash haulers, beverage distributors, and grocery stores, rather than the public.

“California’s bottle deposit law is broken and both consumers and the environment are paying a big price,” said Jamie Court, president of Consumer Watchdog. “Governor Newsom needs to make a priority of putting the pieces of California’s broken bottle deposit law back together to stop this half-billion dollar per year consumer rip-off and to combat climate change, which is one of his top priorities.”

Consumer Watchdog's report recommends that Governor Newsom set a new 90% redemption target, require mandatory returns at all big grocery stores, and align payments and incentives to the new 90% goal. It also urges the state to consider raising the deposit amount, which has helped achieve the 90% rate in Michigan and Oregon.

The analysis also takes aim at lack of enforcement, misguided policies and accounting problems at CalRecycle, the state agency charged with overseeing the recycling laws. The report calls for an overhaul and cultural shift.

‣ Forty percent of state-certified recycling centers have closed in the last five years with hundreds more closings on the way. That leaves more bottles and cans unredeemed by consumers while increasing revenue for waste and curbside haulers.

‣ Grocery and big box chains are not taking back bottles and cans despite a legal obligation to do so.

‣ Accounting scams by big retailers and beverage distributors such as Walmart are prevalent. They are supposed to keep count and pass on the paid deposit for every bottle they sell. But they consistently under-report how much they owe consumers and keep the difference.

‣ CalRecycle, the state agency overseeing California’s beverage container recycling program, has not publicly imposed a fine against distributors that scam the system or retailers that deny access, according to a review of publicly posted press releases for the last five years.

‣ Politically-connected waste and curbside haulers cash in on the bottle and can deposits that are supposed to go to consumers. They are paid a state premium on top, even though the haulers’ lax processing leaves their recycling materials increasingly contaminated and landfilled.

‣ CalRecycle has accumulated a vast reserve of roughly $300 million as of 2018 while failing to pay recycling centers enough to survive. This money should be used to preserve and grow recycling centers that produce clean recyclable materials and to enforce the bottle law via audits and fines for companies caught holding back consumer deposits.

“Everyone’s getting rich off consumer’s deposits — curbside trash haulers, retailers and beverage distributors that scam the system — but we are losing out on big money each year,” said Liza Tucker, author of the report, titled “Half A Nickle: How Consumers Get Ripped Off On every Bottle Deposit They Pay.” “Many of the problems documented trace back to Brown-era policies that the new governor can change.”

The report shows how a tsunami of recycling center closings have left consumers with so few places to redeem their empty bottles and cans that the ten worst served counties in the state average only one redemption center for every 60,000 people. Four Northern counties have lost two thirds or more of their centers in just five years.

Los Angeles County has lost the biggest number of centers in that time period—108 of them.

“Grocers and box stores have put up ‘Do Not Disturb’ signs,” Tucker wrote. “Currently, retail chains, including some of the biggest – Walmart/Sam’s Club, Albertson’s/Safeway, and Vons/Pavilions – are failing to serve 64 percent of convenience zones.”

At the same time, companies like Walmart have been caught undercounting their deposits collected, which shortchanges the recycling system, that depends on deposits to pay for recycling.

“The beverage industry routinely scams the bottle recycling program by under counting, miscoding and failing to report sales,” Tucker wrote. “In 2016, CalRecycle found that Walmart had failed to include the sales of 89 deposit-eligible products in its reporter deposit totals. That meant that $6.8 million worth of deposits were underreported.”

Despite repeatedly being caught undercounting deposits by the state, CalRecyle never fined Walmart.

“There is no incentive for companies to follow the law and to track or report their sales accurately when the worst penalty they face is repaying the money they owe,” said Tucker.