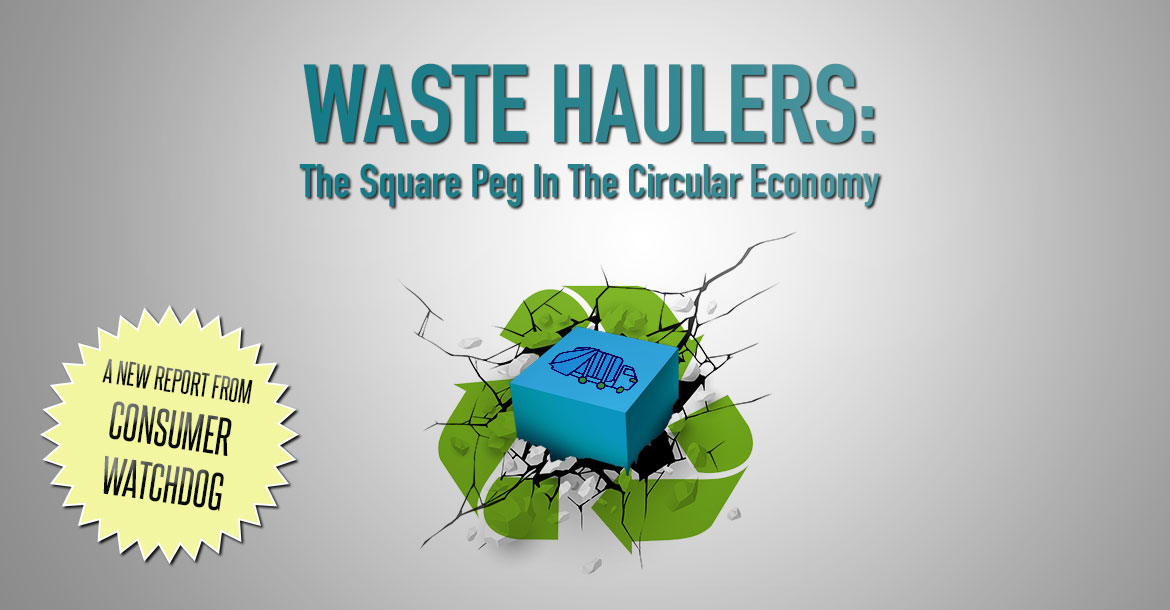 Los Angeles, CA— A muckraking report on the reasons for the failure of California’s bottle deposit system, which currently has a 57% redemption rate, puts the blame on the waste hauling industry.

The exposé by the nonprofit group Consumer Watchdog finds that waste haulers are responsible for increasing contamination of recyclables, have received unreasonable subsidies compared to disappearing redemption centers, and consistently foil reforms. The report finds the hauling industry is the main obstacle to Governor Newsom’s vision of building a circular economy with maximal recycling.

“Waste haulers and their lobbyists are the square peg dirtying up Newsom’s circular vision,” according to Consumer Watchdog’s new report, Waste Haulers: The Square Peg In The Circular Economy. “They do this via contamination of the empties they collect to recycle and contamination of the political process.”

The report is being released as a major legislative reform of the bottle deposit system – Senate Bill 38 (Wieckowski) –will be voted on by the California Senate the first week of June. SB 38, opposed by the waste hauling industry, will model California’s bottle deposit system on every other successful deposit system in the US and world by requiring the beverage industry to arrange for convenient redemption of bottle and can deposits.

The report finds that over the decades waste haulers and their surrogates have lobbied for unjustified subsidies. They are paid more than half of all state payments today when they recycle only 12% of California Redemption Value (CRV) empties.  At the same time, state payments to redemption centers prescribed by law are so low that this has beggared them, forcing mass closures.

CRV bottles and cans diverted to redemption centers are up to 98% clean and thus recyclable while waste haulers contaminate at least one quarter of the materials they collect in curbside bins. But the state pays waste haulers for the CRV consumers are charged on beverage containers they throw into them.  Consumers are forced to forfeit deposits and throw containers into curbside bins when redemption centers close.

Consumers are leaving roughly half of the deposits they pay in state coffers because either they can’t find a redemption center, don’t want to stand in hours’ long lines, or are being turned away by grocers that refuse to redeem containers though they are legally obligated to do so as a backstop to redemption centers.

“Waste haulers are the main obstacle to a working bottle deposit system in California. They oppose SB 38–which would create a system of beverage industry stewardship—in the hope of continuing to keep their unjustified subsidies, consumers and the environment be damned,” the report said.

“In the last decade, waste haulers have worked the legislature to reduce convenient redemption opportunities for the public in order to capture more and more CRV containers and greater state payments,” according to the report.

Among the report’s findings:

•Waste hauler recycling methods lead to the contamination of one quarter to one third of all materials tossed into recycling bins, dumped into trash trucks, and further sifted at giant materials recovery facilities (MRFs) operated by haulers.

•Waste haulers, including municipal haulers, were paid $146 million in 2020 for consumer CRV “donated” to their recycling bins at curbside and rural drop off locations. That is money for CRV deposits that consumers are never repaid. California is the only bottle deposit state to allow waste haulers to bill it for CRV deposits paid by consumers for containers collected in curbside recycling bins.

•Waste haulers are paid 20 times what it costs them to sort CRV containers at MRFs, according to the results of a Public Records Act (PRA) request by Consumer Watchdog to the state’s recycling regulator CalRecycle.

•Waste haulers are paid more than $50 million a year in additional subsidies and giveaways that virtually no other bottle deposit state pays and that have never been shown to improve the quality of the materials they collect or to be financially necessary.

•Leading waste haulers have been indicted or paid settlements for corrupt practices and bribery charges, including a recent settlement of more than $100 million by Recology with the San Francisco City Attorney’s Office for ratepayer overcharges. Recology is the sponsor of a proposed ballot measure to set new mandates to reduce single use plastic packaging and tax manufacturers to raise several billion dollars a year to benefit, among others, themselves.

•Leading waste haulers donated more than $1.3 million to state legislators between 2017 and 2020 and employ heavy hitter lobbyists that have used the revolving door between positions in the Administration and/or Legislature and represent multiple clients, including haulers’ corporate bedfellows—the beverage industry—against reform of the bottle deposit system.

•The trash and beverage industries have fundedCalifornians Against Waste, a group with roots in the environmental movement that is the only advocacy organization to join the industry coalition opposing legislation to reform the bottle deposit system. Donors to the group include the biggest for-profit waste haulers in the state and major beverage makers and distributors. The former director of CalRecycle was a lobbyist for the group, as was a special advisor to the director. Under the former director, meaningful reform of the deposit system was stymied.