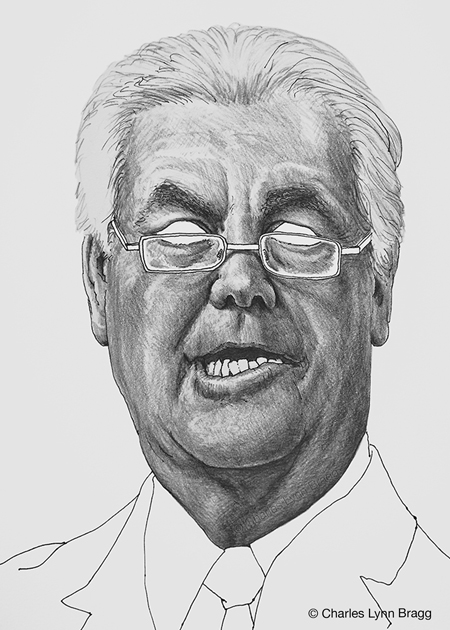 Would longtime Exxon CEO Rex Tillerson make the most inappropriate Secretary of State in American history?

Make no mistake. T-Rex would have one key mission: rescue the oil industry from near extinction following rising global awareness of climate change.

In 2012, Vladimir Putin was quoted saying to Tillerson, “Mr. Tillerson, I am very happy to see you... This is already our second meeting in a short span of time and there is a good explanation for this: increasingly close relations are being forged between your company and Russian market players.” (Bloomberg News)

It would be unprecedented to have a US Secretary of State who is in the same social circle as and a former business partner of Russian oligarchs.

Mr. Trump would do well to acknowledge that what distinguishes America from the Russian oligarchy is the absence of oligarchs in the highest offices in the nation. Like Trump, Putin was elected. Putin’s appointment of oligarchs to government posts consolidated the oligarchy.

Mr Tillerson’s appointment as the face of America abroad and fourth in line for the presidency threatens to turn America into a Russian-style oligarchy over night. That’s why it’s doubtful Senator John McCain and his allies in the US Senate will allow Tillerson to take office.

Tillerson holds about $240 million in Exxon stock. He must divest to participate in decisions, since Exxon’s interests are impacted by almost all foreign policy. But in the Trump Age who knows if Tillerson will.

With a $69 milllion pension, as well, Tillerson cannot truly extricate himself from his former employer.

Tillerson is the global oil executive with the longest tenure, 40 years. My nonprofit consumer group, Consumer Watchdog, has run into him time and again.

He’s famously denied climate change pubicly and propogandized against it, while secretly telling shareholders the company would prepare for its ravages, such as moving refineries out of flood zones.

Exxon has been a world wide oil villain under T-Rex’s reign from its misconduct following the Exxon Valdez spill to the recent failures at its Torrance refinery that led to a massive explosion and 18 months of downtime resulting in a $10 billion profit-taking from California drivers. Exxon has ignored federal subpoenas in the Torrance explosion, and its mismanagement and lack of cooperation is noted by federal regulators and US Congressional Representative Ted Lieu. Exxon kept a tanker with California gasoline idle in Singapore, which artificially inflated California gas prices.

Tillerson opposed President Obama’s sanctions against Russia following the annexation of Crimea because it scuttled a $1 billion deal Exxon had with Russia’s oil company.

The symbol Tillerson’s confirmation would send to the world is that an oil industry once in danger of extinction due to global consciousness about climate change will be set for a revival. US foreign policy is likely to follow geological opportunities for oil drilling expansion rather than the principles of a peaceful and stable world that has largely guided US foreign policy since World War II and the birth of the United Nations.

Senator McCain is a formidable opponent. We should wish him well in protecting US foreign policy and democracy from the clutches of this oil oligarch.