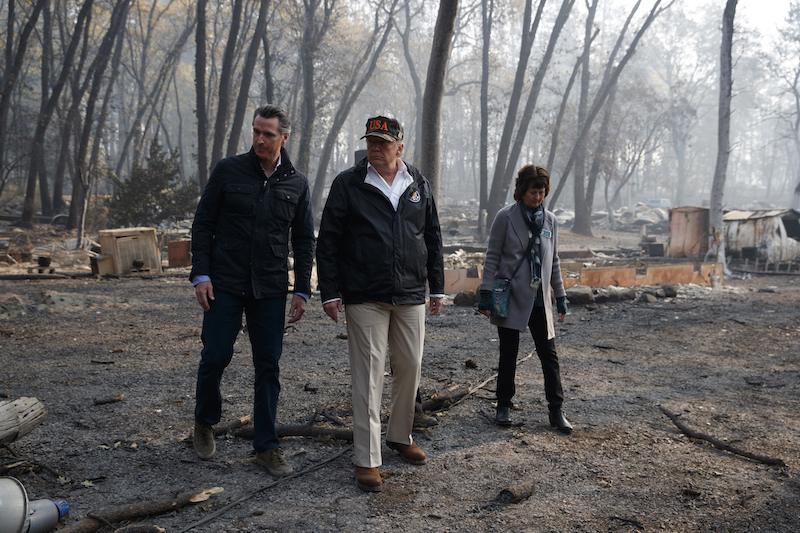 Governor Jerry Brown fancied himself a climate change warrior and so does Governor Elect Gavin Newsom. But if Newsom really wants to do something to avert catastrophic climate change, he’ll have to undo some of what his predecessor did, and then go much further.

Though Brown championed electric cars, renewable energy generation, and other demand side measures, he did virtually nothing to limit oil production. Without leaving oil in the ground, the planet is facing dwindling odds of averting catastrophic global warming. Scientists currently put the odds at one in twenty of keeping climate change at the two degrees Celsius above which the planet cooks.

If Newsom wants to be a climate and environmental leader, he has to lead by example. It isn’t enough to boost renewable energy while talking a good game about the catastrophic effects of climate change.  Newsom has signaled he may dial back on Brown’s high-speed rail and water tunnel boondoggles, but he will also have to body-block big new oil and gas projects and freeze new oil and gas drilling permits to have a prayer of reducing carbon emissions.

Brown faced mounting criticism from both the media and communities suffering the effects of drilling for not only failing to regulate the oil industry’s pollution, but letting it write the rules on how to regulate carbon emissions. Those failures, brought to Brown’s doorstep at the Global Climate Action summit in September by irate protestors, forced him to acknowledge that Big Oil dollars lubricate state politics, including his own campaigns, and lead to inevitable compromise.

The high-profile media attention brought to Brown’s failure to regulate the oil industry forced him to acknowledge that state oil production will ultimately need to stop. In response to Consumer Watchdog’s criticism, he acknowledged that his Administration had permitted far fewer oil wells in the state since 2016, the year Capitol Watchdog began its reporting on Brown’s obeisance to the oil industry. Brown permitted only 381 oil wells in 2016, 1114 in 2017 and 429 in 2018, but has permitted more than 21,397 over his eight-year administration.

The media and political pressure in recent years clearly helped slow the number of oil wells allowed as oil prices have been rising since 2015, creating more economic incentives for drilling in the state.

Unlike Brown, Newsom has shunned oil industry campaign contributions and announced that he was ready to ban fracking in California at a gubernatorial debate. That’s great. But he has to reverse some of Brown’s damage before moving forward by developing a phased plan to establish goals to reduce drilling in California by 2020, with thresholds to meet by 2025 and 2030.

Among Brown’s sins needing reversal: skipping environmental reviews in dispensing permits, exempting from regulation dangerous cyclic steaming that thins and dislodges oil, eviscerating the ability of local air boards to directly regulate carbon emissions from refineries, letting farmers irrigate crops with oil waste water without the certainty that our food is safe, and levying wrist-slap fines on negligent companies. On Brown’s watch, Chevron was fined $350 by the state for letting a man boil to death when a sinkhole opened up underneath him at a well using cyclic steaming.

Besides the need for policy reversals and emergency regulations, Newsom has to insist that regulators at the Division of Oil, Gas and Geothermal Resources (DOGGR) come clean with public information on the dangers of oil extraction instead of using a veil of secrecy to shield the industry.

Consumer Watchdog filed a Public Records Act request in February 2018 requesting information on the number of leaks at oil wells in the state. After regulators held a high-level meeting to which this writer was inadvertently invited via email, DOGGR officials simply covered up by never responding. That has to change. The public has a right to see maps outlining drilling and methane leaks, gas storage fields, and ground subsidence.

Newsom can impose a moratorium on new drilling permits while putting into place emergency regulations. He can heed and shape policy on fracking based on a legislatively-mandated study that found the effects of fracking to be dangerous as he leads up to a ban on the practice. Jerry Brown agreed to the study and then ignored its results.

Lastly, Newsom should use the two thirds majority in the legislature to push through an oil production tax to fund brownfield remediation to address polluted soils and water in oil and gas operations. There is no way to bind the companies to pay for this once their operations cease. California needs a funded plan so that future generations can use this land for solar power and for infrastructure in urban and coastal areas, not to mention for training oil workers to transition into other safer, good-paying jobs.

Newsom calls climate change “an existential threat,” just like Brown did. But he can choose to make a far bigger difference in combatting it.