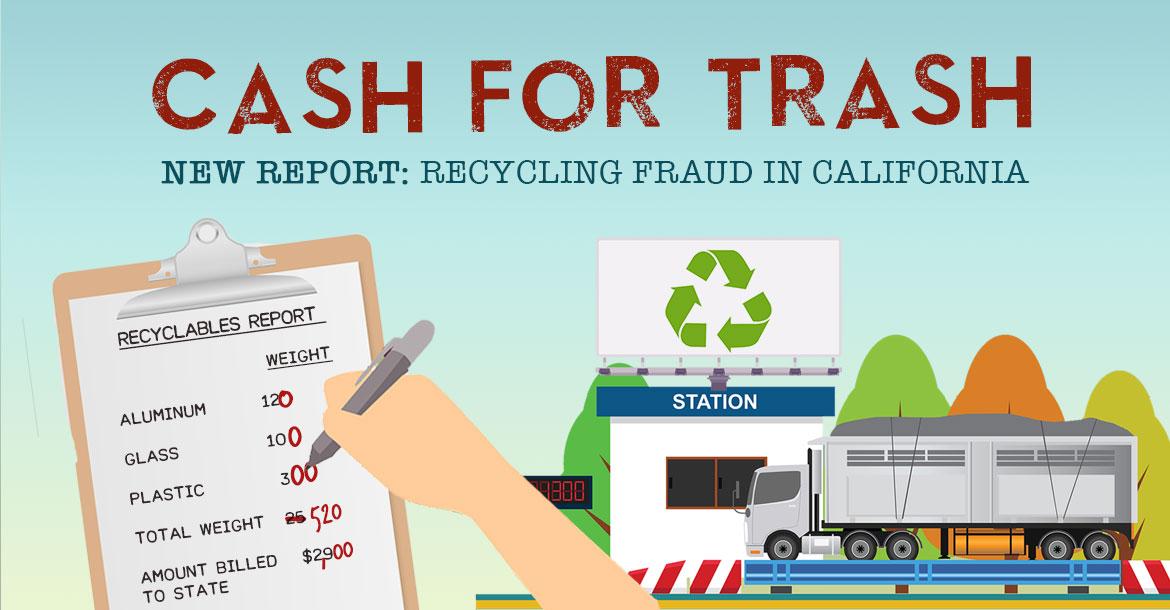 “Experts and insiders point to fraud rings that consist of crooked recycling centers and recycling processors as the source, along with an antiquated paper system of checks and balances run by the state that is easily fooled because it has not been fully digitized,” the group said in its latest investigative report on the bottle deposit system’s dysfunction, "Cash For Trash: Recycling Fraud in California."

The report points to the need for a modern, automated bottle deposit system, like those in other bottle deposit states. This year California's Assembly will take up legislation already passed by the state Senate-- SB 38 (Wieckowski) -- to establish such a system run and managed by the beverage companies.

“California’s bottle deposit program is run largely on a recycler honor system to claim payments from the state for bottle and can redemption," the report finds. "This reimbursement system uses state-set formulas easily manipulated by unscrupulous recyclers and waste haulers with little sophisticated scrutiny by regulators. Not a single other bottle deposit system in the continental United States emulates and copies California’s. Instead, other bottle deposit systems put the responsibility onto the beverage industry to run bottle deposit programs and give them a stake in it. This helps to eliminate fraud because beverage producers lose money if they allow it.”

“Fraud occurs when deposit containers are recycled more than once; when recycling centers and processors that buy materials from them for resale fudge the record-keeping, including the weight of loads used to calculate state payments; when out-of-state deposit containers on which no deposit was ever paid are redeemed; and when California non-deposit beverage containers are passed off as deposit beverages for state deposit refunds,” the report continues.

Among the report’s recommendations:

•Switch to an Extended Producer Responsibility System via passage of SB 38 (Sen. Bob Wieckowski) to institute a modernized system at big supermarkets and recycling centers featuring Reverse Vending Machines and Bag Drop Machines that can screen containers for refund eligibility.

•Require processors to pay recycling centers for all scrap, CRV, processing and administrative payments by check or electronic transfer. No cash.

•Require all recycling centers to use electronic record-keeping and submit receipts and transaction logs electronically to the agency with each load, along with amounts of scrap material purchased and its value in each load.

•Require all recycling centers to ID and report customers with large loads to CalRecycle daily to flag for investigation those bringing in unusually large quantities of containers for redemption.

•Set up an electronic tracking system requiring processors to report to CalRecycle all CRV loads bought, sold, and shipped to end users and to report inventory on a monthly basis.

•Require processors to report to CalRecycle three days before exports of any CRV material so that CalRecycle can inspect for non-CRV material prior to shipping.

•Doctoring weight tickets. Recycling centers can doctor weight tickets by claiming additional weight that does not exist on their reports to CalRecycle in order to boost the amount of CRV reimbursement.

•Padding the load with non-CRV containers – Recycling centers can buy non-CRV glass containers such as empty wine bottles or manufacturer rejects, break them up, and mix them in with CRV bottles to claim the whole load as deposit-carrying containers for state reimbursement.

•Importing non-CRV containers from out of state – Containers are brought in illegally from states and countries such as Arizona, Nevada, and Mexico for redemption by organizers of rackets.

“The state’s recycling regulator, CalRecycle, is clearly unable to effectively and thoroughly contain fraud,” said the report’s author and advocate Liza Tucker.  “It also appears that Governor Newsom has no plan to shut down fraud, and the Administration needs to come up with one. The Governor has made it clear that he wants to build a circular economy that maximizes recycling to minimize waste, cut pollution, and save energy.  Massive fraud in the system is only getting in the way of that vision.”