Los Angeles, CA — Consumer Watchdog reported today that a major overhaul of the state’s once-vaunted bottle deposit system is needed to make drink makers responsible for refunding deposits or consumers will continue to lose a greater share of the roughly $1.5 billion a year they pay in nickel and dime deposits. Redemption centers that redeem bottle and can deposits are closing in the face of economic hardship.

“The California bottle deposit law was designed to recycle billions of empty glass, plastic and metal beverage containers every year, cut pollution, and save energy,” Consumer Watchdog said in its new report, Trashed: How California Recycling Failed And How To Fix It. “Consumer Watchdog’s year-long investigation of the system and others like it around the world has found that California’s bottle deposit system will collapse without fundamental reform and that best practices are not being put to use here.”

Legislation to be heard Wednesday in the California Senate Environmental Quality Committee seeks to reform the bottle deposit system in keeping with the report's main recommendation: make the beverage industry accountable for recycling and redemption of its containers. Read Consumer Watchdog's letter of support.

California’s bottle deposit system relies on redemption centers rather than on retail stores to redeem empties as is done in virtually all the other nine states with bottle deposit programs. As these centers close, many supermarkets and other retailers that promised to be recyclers of last resort are refusing to redeem empties, while trash haulers collect more consumer deposits from the state by turning in containers from single recycling bins.

“The deposit system will only be saved when it is as easy to return an empty bottle or can as it is to buy a juice, soda, or beer as is done in the most successful programs,” said Tucker. “The key to major reform is ubiquitous consumer access to convenient redemption and putting the responsibility for running that system onto the beverage industry that has never wanted to take responsibility for the end of life of the products it makes, distributes and sells.”

The report points out the best examples of bottle deposit systems from around the world and the country. All of them feature widespread access to redemption via retail stores and/or redemption center hubs, higher deposits than in California, and a high degree of automation for bottle returns. All of them make the beverage industry responsible for running the bottle deposit system. In Oregon, the legislature passed a law to automatically raise bottle deposits when redemption rates dip below a certain target for two years in a row. The Norwegian beverage industry keeps redemption rates high to avoid an environmental tax. 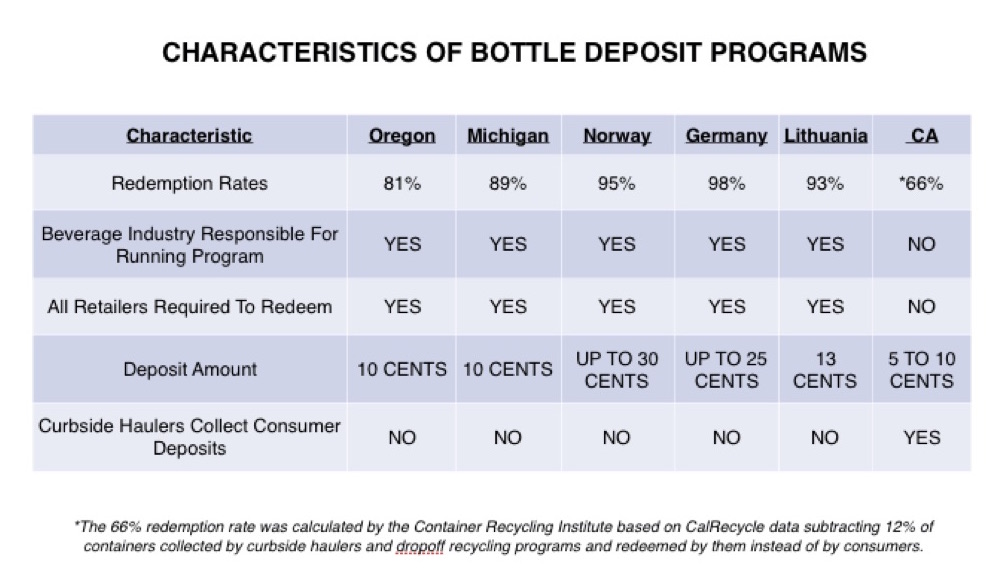 The bottle deposit system regulator, the California Department of Resources Recycling and Recovery (CalRecycle), has traditionally been a weak enforcer of the bottle deposit law though it recently fined CVS $3.6 million for shirking recycling responsibilities.

“After years of poor enforcement, CalRecycle took an important first step, but it needs to continue tough enforcement against many other chains shirking their recycling obligations,” said consumer advocate Liza Tucker, author of the report. “In addition, more stores are signing up to pay fines of $100 a day instead of taking back empties in store, which punishes consumers further by restricting redemption access even more. To add insult to injury, CalRecycle has not collected all the money these stores owe.

“But retail stores that refund consumer deposits are stuck between a rock and a hard place. Stores are not legally allowed to sell their empties straight to processors of the materials to recoup that money that wholesalers charge them up front for beverages. Only certified recyclers can redeem deposits and then sell the materials. This part of the existing law makes zero sense and shows just how broken our bottle deposit system is.”

The report recommends that the legislature:

-Mandate that all major grocery store, big box, convenience and drugstore chains selling beverages take back empties and redeem deposits. Currently, these stores are obligated to take empties back only in places that lack nearby centers, but local surveys show up to two thirds do not.

-Require CalRecycle, the program administrator, to enforce the existing bottle deposit law by levying meaningful fines on retail stores for each day, including retroactively, that they shirk their recycling responsibilities.

-Add wine and distilled spirits to beverages with bottle deposits including soda, juice and water to raise the amount of money for the program by roughly $100 million annually.

-Eliminate unjustified subsidies to waste haulers that are allowed to collect consumers’ deposits from blue recycling bins on top of other state payments not shown to improve the quality of recycling.

The beverage container recycling program is beset with problems, among them that Californians, and not the beverage industry, foot the majority of the bill for the program; that waste haulers collect deposits plus outsized payments from the state for handling only 12% of the empties while redemption centers that handle the other 88% are starved of state payments; and inadequate CalRecycle policing and punishing of retailers obligated but refusing to be recyclers of last resort.

“Successful recycling in the rest of the world is based on consumer convenience and returning cans to the point of purchase using modern automation such as Reverse Vending Machines. Consumers feed empties into the machines that sort them and get store credit or cash back,” the report said.  “Models that work make beverage and retail companies that produce, deliver, and sell their products responsible for the recycling of their packaging. That incentivizes them to make the packaging more recyclable in the first place.

“California has not learned that lesson, largely due to the political power of soda, beer and other beverage makers, distributors and retailers in Sacramento that want no added burdens. Many retailers that are statutorily obligated to redeem containers in-store refuse to do so. Their resistance is aided and abetted by waste haulers that rake in exorbitant government subsidies for increasingly contaminated loads.”

Consumer Watchdog's previous report, "Half A Nickel," explains why consumers do not recover enough of their bottle and can deposits. Read it here: https://www.consumerwatchdog.org/report/half-nickel-how-california-cons…

Cost to Californians $10 Trillion by 2045 From Oil And Gas, Consumer Watchdog Reveals in New Report
END_OF_DOCUMENT_TOKEN_TO_BE_REPLACED