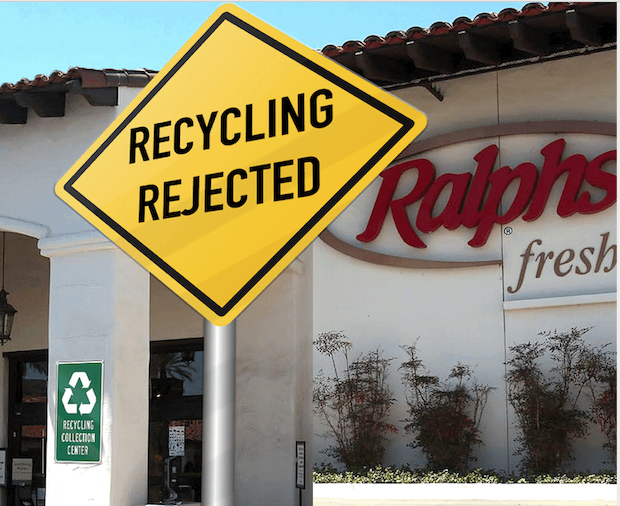 Update 4/24/19 5 PM: Senator Stern agreed to amend his legislation to remove more exemptions from recycling for grocery stores in response to the survey.

Los Angeles, CA — Two thirds of fifty Los Angeles-area grocery, convenience and drug stores that are required by the state to refund consumer deposits for empty beverage containers refused to issue refunds, according to a random audit in Los Angeles by Consumer Watchdog.

Consumer Watchdog took videos of its investigation. Stores were assigned a grade of easy access to recycling and refunds, difficult access requiring persistence, or no access. 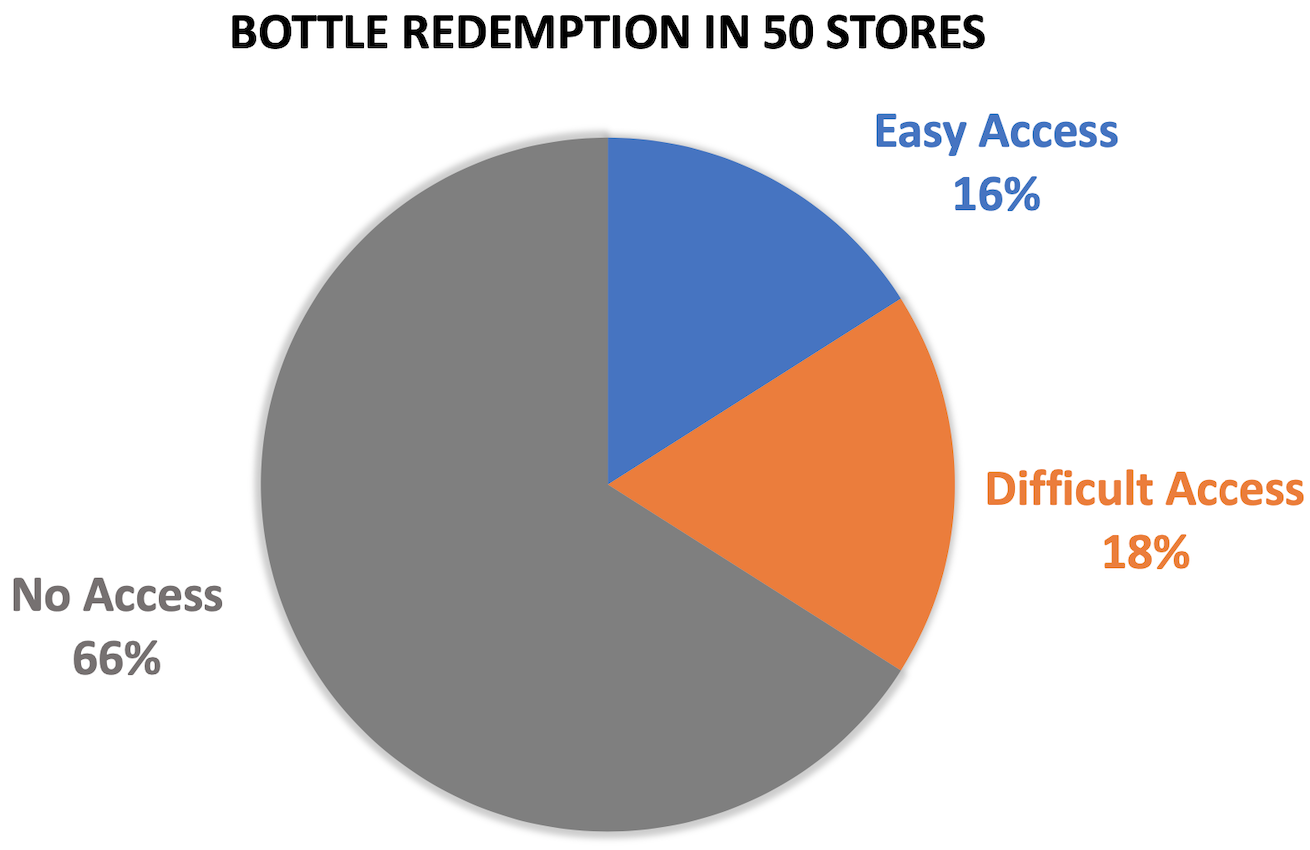 The findings of Consumer Watchdog’s investigation include:

•66% of all the stores audited refused to refund deposits and recycle. Out of the remaining 34%, less than half provided easy access to refunds, and more than half provided difficult access requiring customer persistence. Among the big chain stores sampled, Ralphs, Rite Aid, Vons, Pavilions, Albertsons, and Smart and Final denied access outright.

•More often than not, even stores that took back empties did so reluctantly. No uniformity in procedures to return empties existed, and ease of access differed even between stores belonging to the same chain. Few managers at stores that took empties were generally knowledgeable and most clerks were clueless until prompted. More than once, a manager had to be summoned in order to override a cashier’s rejection of containers.

•The state could collect up to $91 million annually if, consistent with the audit, 66% of stores statewide that are not redeeming deposits were forced to pay the daily $100 opt-out fee.

California’s 1986 bottle law obligates groceries, drug and convenience stores, and other beverage dealers to recycle empty containers and pay consumers a nickel or a dime if no recycling center exists in a half mile around a major supermarket. Now that recycling centers are in economic crisis and 40% have closed in recent years, grocery stores are refusing to follow the law.

Legislation by State Senator Henry Stern, SB 724, would exempt more stores from recycling and refund obligations. SB 724, to be heard in the Senate Environmental Quality Committee Wednesday, would only require stores to take empties and redeem consumer deposits if no recycling center exists within one mile, rather than the current half mile standard.

“Recycling centers are closing right and left, but stores are shirking the state’s law on a daily basis by refusing to be recyclers of last resort while telling the state that they do perform this service,” said consumer advocate Liza Tucker. “Senator Stern and legislators need to make recycling easier for consumers, not harder, otherwise both consumers and the environment will lose.”

All beverage dealers must post conspicuous signs at each public entrance that specifies either the name, address, and hours of the nearest certified recycling center taking empties or that directs consumers to refunds at cash registers within the store or to a specifically-designated location on the premises. Of the stores that reluctantly refunded deposits, only little more than one in ten had signs. Of stores that promptly refunded deposits, only little more than one third had signs. Signs were often posted well below eye level or obstructed by outdoor merchandise. Sometimes they directed consumers to recycling centers that no longer existed or to a center with no name or address.

One manager at a drugstore with no sign acknowledged that the return system, which involved a cashier directing Consumer Watchdog to the photo department, was “one of those secret things.” He claimed that there was no system in place to gather and transport empties to recyclers.

This “secret” is abetted by the fact that nowhere on CalRecycle’s website are the stores required to accept empties posted. Consumer Watchdog obtained the list by requesting it from the agency’s public information officer.

CalRecycle keeps the statewide list of 3,799 stores that are signed up to be recyclers of last resort. Another 239 elected to pay fees instead totaling $36,500 a year apiece. Over the decades, yet another group of more than 1,200 stores won exemptions from recycling responsibilities altogether. CalRecycle could grant them if the stores grossed less than $2 million a year, recycling centers there could not be economically viable, or regulators determined consumers simply preferred to throw their empties into the trash or a recycling bin and forgo refunds.

A March study by Consumer Watchdog found consumers are losing out on nearly half their bottle deposits because of the lack of easy access to redemption. Read that study here: https://www.consumerwatchdog.org/HalfaNickel.pdf

Based on the findings, Consumer Watchdog recommended in a letter to the Governor and CalRecycle:

•CalRecycle should make the locations nearest to consumers easily searchable on the website, along with recycling centers, to make recycling of empties and refunds easy.

•CalRecycle should perform frequent surprise inspections and impose robust fines, including back fees of $100 a day, against stores that sign up for bottle recycling but turn consumers away. CalRecycle should also fine stores that do not post signs advertising their obligation.

•The legislature should require all big stores selling beverages, including chain convenience, big box, and grocery stores grossing more than $2 million a year each in the state, with trucking and warehouse capacity, to offer redemption services regardless of the proximity of a recycling center.

•CalRecycle should revisit the criteria currently used to obligate stores to recycle not just on sales but consider storage and transportation capacity. The regulator could also consider paying handling fees to stores.

View the full list of Option A CalRecycle Stores that are supposed to redeem bottle deposits here:

Cost to Californians $10 Trillion by 2045 From Oil And Gas, Consumer Watchdog Reveals in New Report
END_OF_DOCUMENT_TOKEN_TO_BE_REPLACED