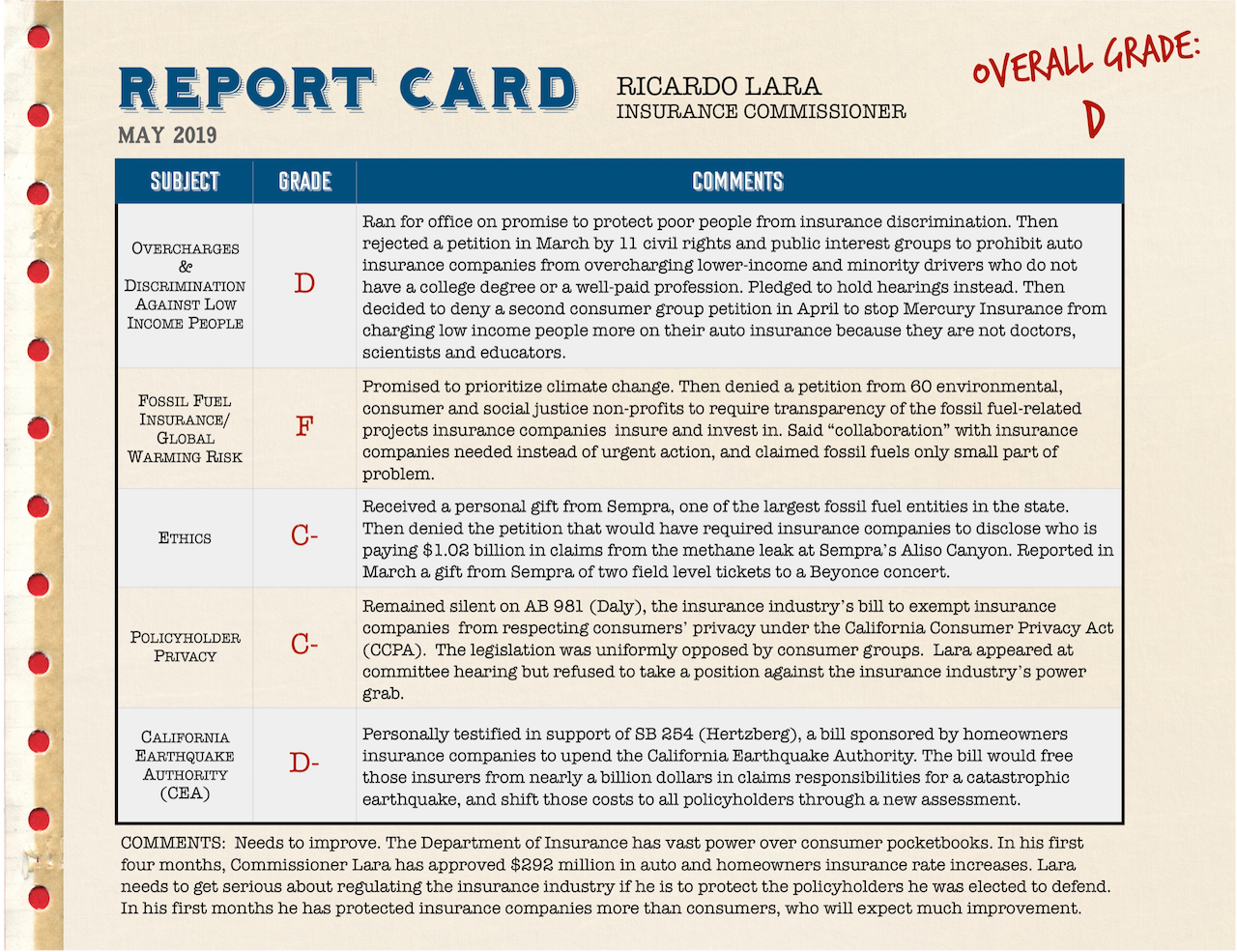 Los Angeles, CA – California Insurance Commissioner Ricardo Lara, who has approved $292 million in auto and homeowners’ insurance rate increases since being elected, has received a “D” average from the nonprofit group Consumer Watchdog on his first four-month report card.

The report card finds Commissioner Lara has  given in to the insurance industry on major decisions that allow poor people to be overcharged based on their occupation and that allow companies to keep their insuring of fossil fuel projects like Aliso Canyon from public scrutiny, despite pledges to take action on both issues. Just this week, Lara’s Department moved to allow Mercury Insurance to hike a surcharge on low-income drivers that costs drivers as much as 15.4% more for not being a college-educated scientist, doctor, accountant or educator.

Consumer Watchdog’s report card also takes Lara to task for failing to stand up to the insurance industry on policyholder privacy and for advocating shifting a billion dollars in financial responsibility for earthquake insurance from insurance companies to policyholders.

“Lara needs to get serious about regulating the insurance industry if he is to protect the policyholders he was elected to defend,” Consumer Watchdog reported in its assessment. “In his first months he has protected insurance companies more than consumers.”

The non-profit group, whose founder Harvey Rosenfield authored the ballot measure that made California’s insurance commissioner an elected position in 1988, also called out Lara for his ethics.

Lara received a personal gift of field level Beyonce tickets from SEMPRA, the owner of Aliso Canyon, and rejected a petition from 60 environmental groups to force public disclosure of the company’s insurers, which paid $1 billion in claims over the nation’s largest methane leak. Lara’s insurance commissioner campaign committee also reported $71,000 in contributions from fossil fuel companies interested in blocking action by the commissioner on disclosure of their insurance policies

“This is a deeply disappointing record for Mr. Lara’s first semester. Stopping insurance companies from overcharging people just because they didn’t get an elite education or don’t have a fancy job should have been an easy assignment for Mr. Lara. Requiring insurance companies to disclose their investments in the fossil fuel industry is Global Warming 101,” said Rosenfield.  “Based on his campaign, Californians were expecting him to ace these tests of his commitment. Tweets are no substitute for the hard work that is needed now at this crucial moment when the political establishment is failing the public in every other way. Mr. Lara can do better, and must.”

Proposition 103 has saved California drivers $154 billion on their auto insurance since 1988, according to a 2018 report by the Consumer Federation of America.

The report card, which overall notes that Lara “needs improvement,” grades the Commissioner in five subjects: 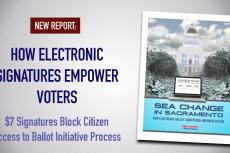