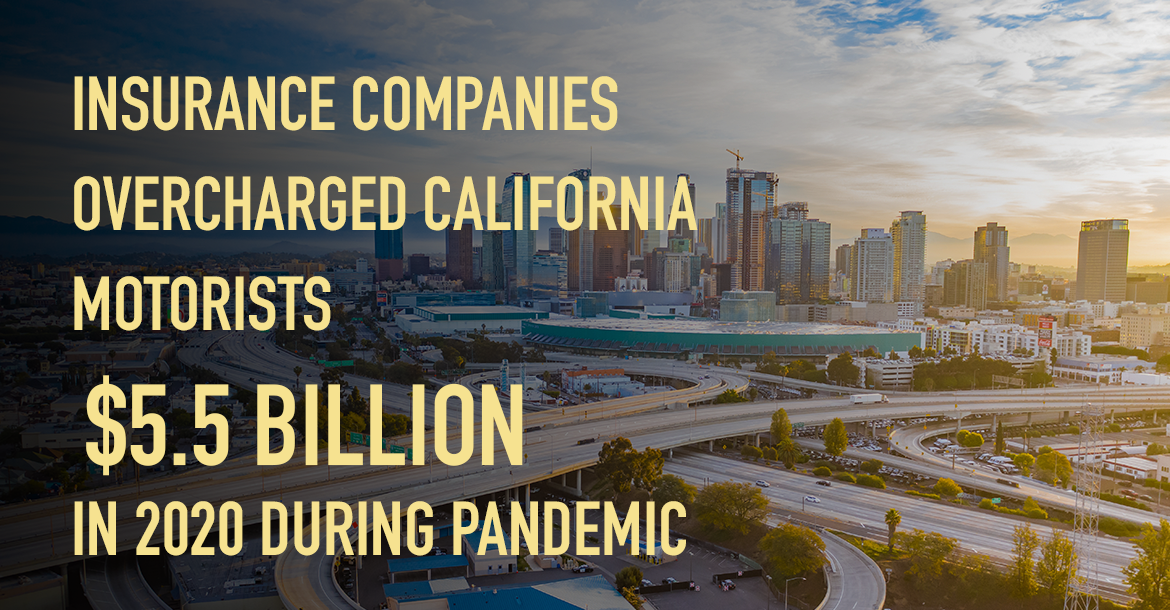 As a result, insurance companies’ average return on net worth – a measure of profitability that includes premiums and investment income – was more than twice what California law allows last year.

“Asking insurers to calculate their own refunds hasn’t resulted in consumers getting what they’re owed. Insurance companies are hanging on to billions of drivers’ dollars that should be helping Californians get back on their feet as we emerge from the pandemic.  The Insurance Commissioner must require companies to refund past overcharges in full, with interest, and make sure rates are not excessive going forward,” said Carmen Balber, executive director of Consumer Watchdog.

Data on 2021 overcharges is not yet available. However the pandemic has continued to affect the economy and traffic patterns and accident rates were not what they were before March of 2020, indicating that insurance companies owe consumers billions more for the first six months of 2021. Companies have so far repaid less than $100 million for 2021.

The Insurance Commissioner has the power – and the obligation – under voter approved Proposition 103 to require companies to refund these overcharges. Prop 103 requires all auto, home and business insurance companies to maintain rates that are neither “excessive” nor “inadequate.” Companies are also required by law to open their books and justify their rates. A longstanding formula prohibits insurance companies from collecting excessive profits. Proposition 103 made the office of Commissioner an elective post and gave the Commissioner full authority to order refunds.

“Many Californians are struggling to pay their bills in the aftermath of the shutdown. Insurance companies cannot be allowed to keep billions in illegal overcharges,” said Balber.

Analysis Based on 2010-2020 Industry Data on Profits, Claims

Consumer Watchdog’s analysis is based on profit and loss data compiled from insurers’ annual statements by the California Department of Insurance and the National Association of Insurance Commissioners.  The data reflect the sudden and catastrophic impact the virus shutdown had on Californians and the economy: accidents and projected claims payouts fell dramatically as most people and their cars sheltered in place.

California auto insurance company loss ratios – the percentage of each premium dollar that the insurance company reported in claims – averaged 52.7 cents for every premium dollar charged in 2020. That was a drop of 11.8% from the average 64.5 cents for every dollar charged in 2019. Consumer Watchdog calculated the difference between the amount of premiums insurers collected in 2020, and what they should have collected to be consistent with 2019 loss ratios. The non-profit citizen organization concluded that insurers overcharged California motorists by about $5.5 billion last year.

For example, California’s largest auto insurance company, State Farm, reported a loss ratio that was 22.1% lower in 2020 compared to 2019. That means State Farm policyholders were overcharged by about $1.2 billion in 2020. According to a review of reports it filed with the Department of Insurance, State Farm has voluntarily returned just half that amount, $613.4 million in refunds to policyholders.

An actuarial analysis by AIS Risk Consultants reviewed California auto insurers’ return on net worth, which is a measure of profitability that includes premium and investment income, between 2010 and 2019. It estimates that in 2020, the average return for all insurance companies doing business in California was a whopping 16.6% for personal automobile insurance. That amount is more than double the maximum permitted rate of return of 7% set under Proposition 103 regulations, which determine whether a rate is excessive. 16.6% is also approximately four times insurers’ average return on net worth over the prior decade.

Actual experience makes clear that the lower that insurance companies’ loss ratios go – the more of each premium dollar they keep for themselves (as they did with 2020’s 52.7% loss ratio) – the higher companies’ return on net worth climbs.  This relationship is shown in the graph seen below. 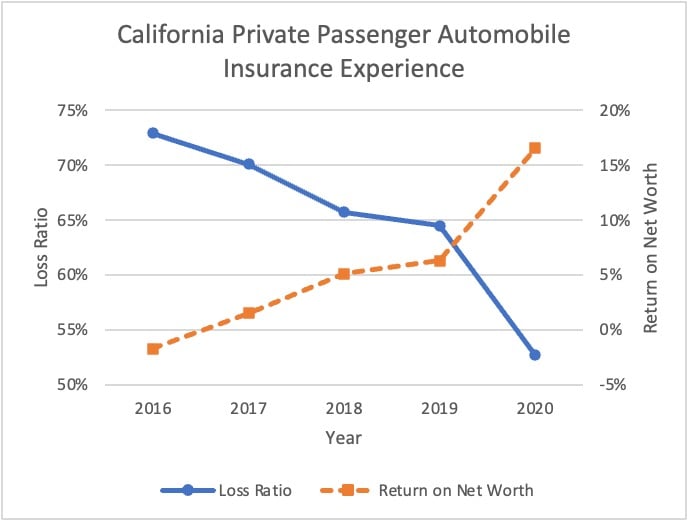 Read Consumer Watchdog’s letter to Commissioner Lara in April, 2020, urging him to place a moratorium on approval of any new rate increases until the end of the pandemic.

Reports by insurance companies on how much they have voluntarily refunded their customers can be found here.