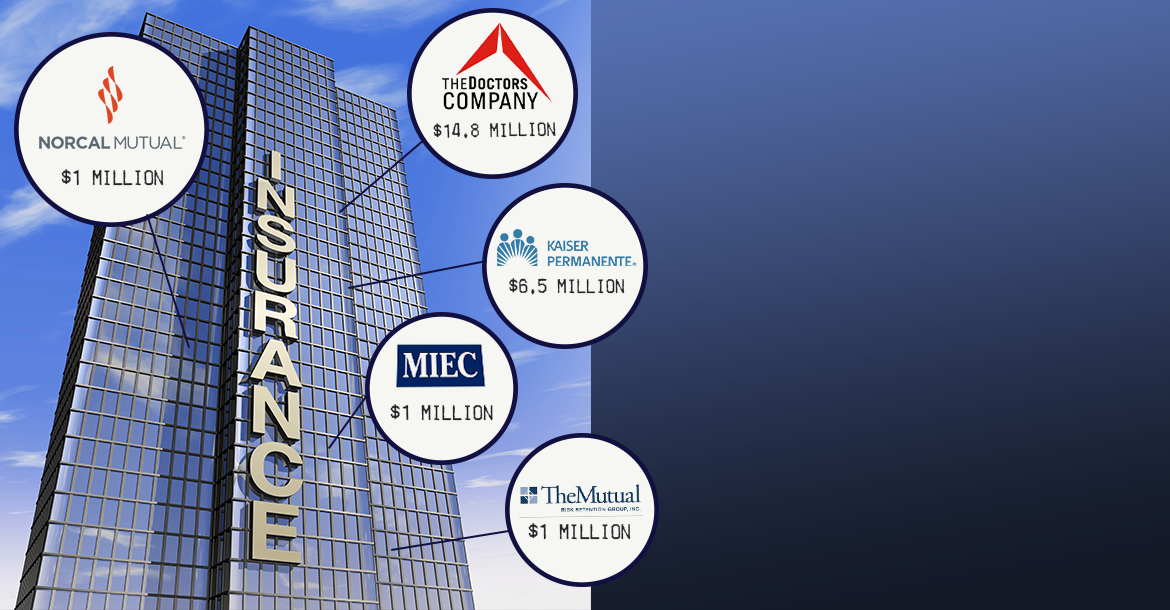 Los Angeles, CA – Insurance companies who profit by denying fair compensation to patients injured or killed by medical malpractice have put up $27.8 million to oppose the Fairness for Injured Patients Act. Insurance money accounts for two-thirds of the $43.8 million raised to oppose the Fairness Act, a measure that seeks to restore accountability for injured patients on the November 2022 California ballot.

“California insurance companies will spend whatever it takes to protect their golden goose – California's cap on compensation for those injured, maimed or killed by medical malpractice that prevents many patients from ever seeking justice,” said Carmen Balber, executive director of Consumer Watchdog. “The $250,000 cap on damages for a person’s lost quality of life, disability and death hasn’t gone up a dime since 1975, and that means insurance companies never have to compensate patients who are harmed or killed in a medical facility they trusted to make them better. The cap is a gold mine for insurance companies and the Fairness Act will level the playing field for injured patients who have been denied justice for too long.”

The Fairness for Injured Patients Act would index California’s $250,000 cap on compensation for malpractice victims’ lost quality of life, disability or death, and allow judges or juries to decide fair compensation in cases of catastrophic injury. The cap has not increased since it was enacted in 1975, and is worth just $50,000 in today’s dollars.

Sarah Hitchcock-Glover’s son Adam was just twelve years old when his physician’s failure to order simple lab tests after surgery caused her to miss clear signs of septic shock and cost Adam his life. His parents went to court to prevent this from happening to another family, and quickly learned how the law stacks the deck against patients.

“We brought suit to hold the surgeon accountable for the errors that led to Adam’s death, but her insurance company did everything they could to delay and drag out the case. As we neared trial, the money available to pursue the case ran out because California caps recovery for a child’s death at $250,000. We were devastated that the cap forced us to abandon the case, so close to getting answers and accountability, because of costs. The insurance company paid nothing and no one was never held responsible. Nothing changed,” said Hitchcock-Glover, of Los Gatos, California.

Medical malpractice insurance companies exist to compensate patients when they are harmed by a hospital or medical provider’s negligence. Yet in California, they use just a fraction of the premium dollars they collect to compensate injured patients. From 2008 to 2018, California malpractice insurers spent an average of just 37 cents of every premium dollar they collect to pay malpractice claims to victims, according to data reported to the National Association of Insurance Commissioners.

The medical malpractice damage cap disproportionately harms California’s most vulnerable patients, including children like Adam, and Black mothers who experience higher pregnancy and childbirth-related injuries and deaths than other women. In California, Black mothers are 4-6 times more likely to die in childbirth than white women.

Charles Johnson, Chair of the Fairness for Injured Patients Act campaign, lost his wife Kira after she gave birth to their second son. Her surgeon cut her bladder during a C-section but Kira was allowed to bleed internally for ten hours as her husband pleaded for help but was ignored. When Kira was finally taken back for emergency surgery it was too late to save her life.

“This ballot initiative will fix a system that does not provide Black and brown families with a fair day in court when they face gross medical negligence. The insurance companies are to blame for a system that’s stacked against us, and we are standing up with the Fairness Act to say no more,” said Johnson.

Meet the coalition of families supporting the Fairness for Injured Patients Act at: https://www.patientsforfairness.org/

Learn more about the Act at: https://fairnessact.com/