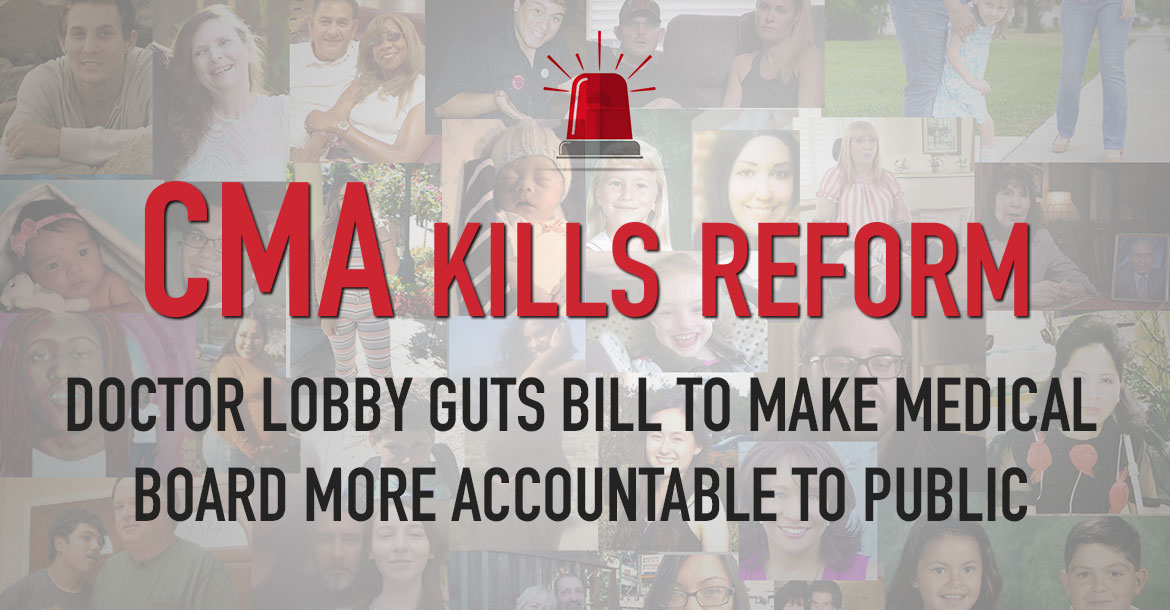 At a meeting Tuesday afternoon, the Medical Board of California voted to only support SB 806 if it is amended to restore provisions to give the Board a majority of public members and increase physician licensing fees that lobbyists for the California Medical Association got stripped from the bill late Friday. In comments, public members of the Board argued for the public member majority after an outpouring of testimony from medical negligence victims in support. Medical Board President Kristina Lawson said it was about the "trust and integrity and credibility of this Board." All but one of the doctor members of the Board ultimately, if reluctantly, went along with the public members. Board staff also reported that the Board faces insolvency if the fee increase is not restored.

"For the first time in its history, the Medical Board of California is urging lawmakers to give the public a bigger seat at the table. But the undue influence of the doctor lobby stripped that reform from legislation that must pass the Senate this week. It falls to the Assembly to stand up to the California Medical Association and give the public the accountability it is demanding. That is the least that families harmed by medical negligence deserve," said Carmen Balber, executive director of Consumer Watchdog.

Sacramento, CA – In a stunning reversal, legislation to make the Medical Board of California, charged with disciplining negligent doctors, more accountable to the public was gutted on the Senate Floor on Friday after being in print for just one week.

“It’s shameful that the California Medical Association has so much sway that it can force lawmakers into a stunning reversal on a priority patient safety bill in the course of a week. That’s why patients who have been denied justice have gone directly to voters with the Fairness for Injured Patients Act on the November 2022 ballot – because the doctor lobby crushes every effort to make patients safer in Sacramento,” said Carmen Balber, executive director of Consumer Watchdog.

SB 806 was proposed by the joint Sunset Review Committees after lawmakers heard months of testimony from injured patients, and the families of people killed by medical negligence, who have been denied answers and accountability at the Medical Board and in court because of California’s outdated cap on compensation for those harmed by medical negligence.

Listen to their testimony here.

Watch the joint legislative Business & Professions Committee press the Medical Board to explain its failures here.

A current public member of the Medical Board, Eserick “TJ” Watkins, echoed the public’s concern that the Board does not protect patients with a majority of doctor members. He testified: “This Board’s value is: We protect the doctors. And we will go over and above in order to do so.” Watch the video.

The Fairness for Injured Patients Act is an initiative measure qualified for the November 2022 ballot that would update the 1975 cap on compensation for 46 years of inflation and allow judges and juries to decide in cases of death or catastrophic injury. The 1975 law falls hardest on women, communities of color, low-income patients, children and the elderly, who are most likely to be denied justice because of the cap. Learn more about the Fairness Act here.

The stories of the families that are fighting to update the 1975 cap on compensation and for public representation at the Medical Board of California can be found here.