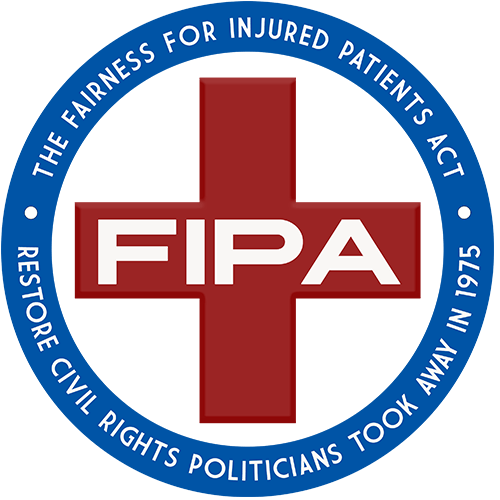 Los Angeles, CA -- Supporters of the Fairness for Injured Patients Act announced today that in just five weeks they have gathered 307,000 of the petition signatures needed to qualify the initiative measure for the November 2020 ballot. The group also notified the Secretary of State that they have passed the 25% signature threshold, triggering a requirement that the Legislature hold a public hearing about the measure.

A total 623,212 valid signatures must be submitted by May to place the measure before voters at this year’s election. Initiative proponents typically collect 30% more signatures than are required because some signatures will be deemed invalid.

The Fairness for Injured Patients Act (FIPA) will adjust the compensation cap imposed on injured patients by Sacramento politicians in 1975 that has never been adjusted.  Juries are not told of the cap that prevents injured patients from receiving more than $250,000, in 1975 dollars, for their quality of life and wrongful-death survivor damages, no matter how serious the injury or severe the medical negligence. Many patients, including the family members of children, seniors, and stay-at-home parents, cannot hold negligent medical providers accountable because it costs as much to bring a case to court as it is possible to recover.

If the measure qualifies, voters will decide whether to adjust the 45-year-old compensation cap for inflation and allow juries and judges to decide cases of death or permanent disability without the cap. The initiative requires that juries be told about the cap, which it indexes for inflation to approximately $1.2 million.

Bree and Nelson Moreno are two of the three official proponents of FIPA. Their daughter Mia’s heart stopped during a medical procedure because she was negligently over-sedated when she was just a few weeks old. She now lives a life of cerebral palsy, has very little control over her body’s movement, and will require lifelong care.

If the Fairness for Injured Patients Act is enacted in the November 2020 election, then the jury that decides Mia’s case will not be limited by the $250,000 compensation cap because she has permanent brain damage and cerebral palsy.

“I’m collecting signatures and doing everything I can to support the Fairness for Injured Patients Act so Mia and thousands of kids like her can get the justice they are currently denied. We can’t reach the ballot fast enough to update this 45-year-old law that has taken away the rights of families like mine for so many years,” said Bree Moreno.

California has the lowest medical negligence compensation cap in America, along with Montana and Texas. 33 other states either have no cap or exemptions for death and catastrophic injury such as those proposed by FIPA.

Scott Olsen is the other proponent of FIPA. His now 28-year-old son Steven was denied a CT scan when he was two years old that would have saved him from a lifetime of blindness and cerebral palsy. Steven’s jury compensated him $7 million for that lost quality of life, but their decision was slashed to $250,000 when they left the room. Because of the 1975 law’s limits on Steven’s rights, he ultimately recovered less than $3 million dollars for medical expenses, lost quality of life, lost wages, and his lifetime of disability from age two through the rest of his life.

“It’s time to stop lying to juries and the Fairness for Injured Patients Act will put an end to the lies,” said Scott Olsen. “I’m asking everyone to sign the petition and support the initiative to prevent what happened to us from happening to other families.”

Meet the Olsens and Morenos, and learn more about the Act, at http://www.fairnessact.org