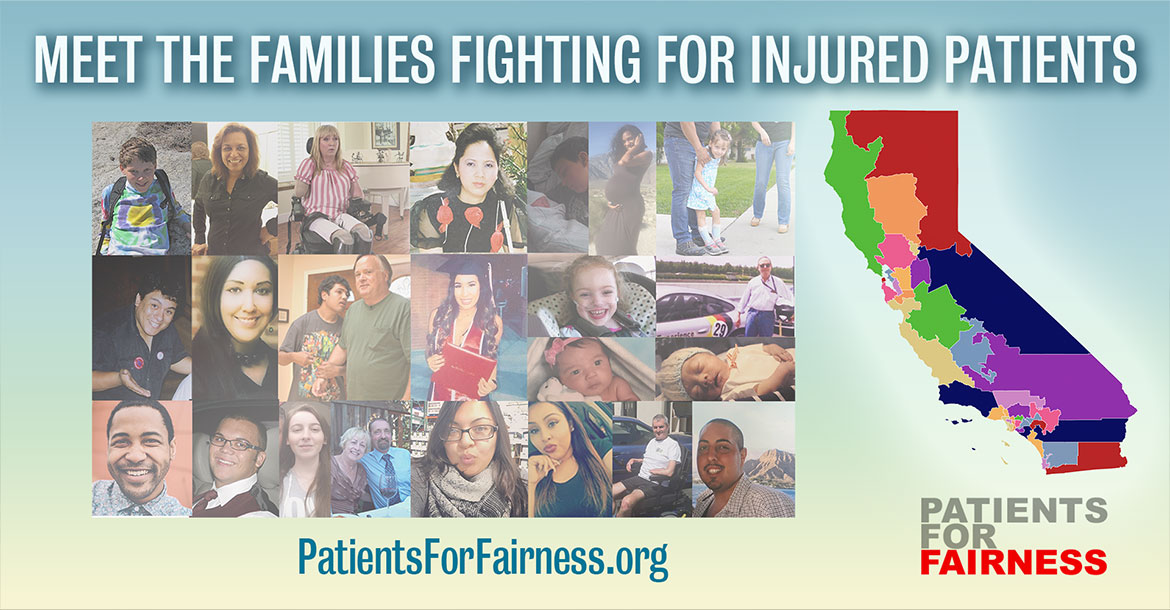 Los Angeles, CA -- A coalition of patients and families harmed by medical negligence launched a new website today – www.PatientsForFairness.org – one year before Election Day 2022 when Californians will vote on a ballot measure to restore the rights of medical negligence victims.

The Patients for Fairness coalition website documents the stories of 60 patients and families representing every region of California, whose experiences show the trauma, loss and injustice caused by preventable medical errors and the state’s medical negligence cap. The website features video testimonials, profiles and photos of each patient, whose stories can also be found by navigating a map of the 40 Senate districts across the state.

The coalition will lead a grassroots, patient-focused campaign in support of the Fairness for Injured Patients Act. The ballot initiative will update the 1975 California medical negligence cap that prevents families like theirs from getting justice for their loved ones or protecting future patients from harm.

Steven Olsen was a vibrant two-year-old when he was blinded and brain damaged after being denied a simple CAT scan. A jury awarded him $7 million for his lifetime of darkness and dependence on others, but California’s cap on damages reduced that award to $250,000.

“It’s been more than thirty years since medical negligence stole my son Steven’s future. I worry every day about what will happen to him when I’m gone. Patients for Fairness allows us to tell his truth and fight for change so no other family has to suffer what ours has,” said Scott Olsen of Chula Vista, Steven’s father and a proponent of the Fairness for Injured Patients Act. https://patientsforfairness.org/stevenolsen/

The measure would index for inflation the $250,000 cap on compensation for medical negligence victims that has not been changed in nearly 50 years. It would also allow judges and juries to decide compensation in cases involving catastrophic injury or death. The change would restore injured patients’ ability hold facilities that harm them responsible, making insurance companies not the healthcare system pay for the costs of preventable medical errors and making patient care safer.

Kira Johnson died after giving birth at Cedars Sinai in Los Angeles when her bladder was lacerated during a C-section and her family’s pleas for help were ignored for ten hours while she bled internally.

“Too many Black moms are dying preventable deaths, and are then denied justice because of an outdated California law that stacks the deck against mothers and women of color,” said Kira’s husband Charles Johnson, the Chair of the Fairness for Injured Patients Act campaign. “This ballot initiative is in large part about fixing a system that does not provide primarily Black and brown families with a fair day in court when they face gross medical negligence.”
https://patientsforfairness.org/kirajohnson/

The dozens of families featured at www.PatientsForFairness.org represent every region of California. The following are just a few of their stories:

Robert Downey, Sacramento County (SD 4, AD 8) – Rob lost his hands and feet after doctors dismissed his concerns about contracting a MRSA infection from his son.
https://patientsforfairness.org/robertdowney/

Shawn E. Washington II, San Joaquin County (SD 5, AD 12) – Shawn entered the ER complaining he could not breathe, but as he coughed up blood his care was delayed for eight hours until his death.
https://patientsforfairness.org/shawnwashington/

Shilpa Airy, San Francisco County (SD 11, AD 19) – An error during an endoscopy caused entrepreneur and research scientist Shilpa to aspirate while under anesthesia, leading to lung failure and, ultimately, her death.
https://patientsforfairness.org/shilpaairy/

Alex Smick, Riverside County (SD 28, AD 75) - Young Alex sought emergency care after taking too many prescribed painkillers, but was given a deadly overdose of medications in the hospital.
https://patientsforfairness.org/alexsmick/