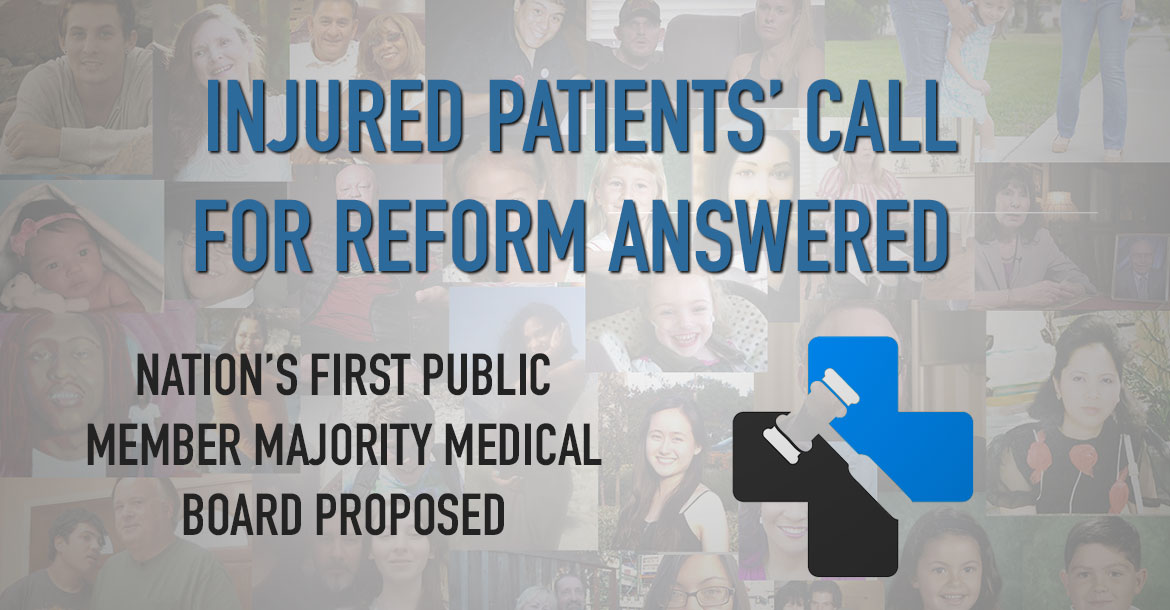 Sacramento, CA – California lawmakers have moved legislation to the Senate Floor to make California the first state in the nation whose Medical Board has a majority of public, not doctor, members. The bill follows months of calls for increased public representation from families harmed by medical negligence who have been denied answers and accountability by both the Medical Board and the state’s 46-year-old cap on compensation for injured patients.

On Thursday, the Senate Appropriations Committee amended SB 806 (Roth) to include the joint Senate and Assembly Business & Professions Committees’ Medical Board reform recommendations as part of the legislative sunset review of the Board. The bill moved off suspense and now heads to the Senate Floor where it must be voted on by June 4.

In addition to increasing the number of public board members, the bill would also resurrect the office of Enforcement Monitor – a legislatively-empowered auditor of the Medical Board’s physician discipline functions. SB 805 also calls on the Board to recover from physicians the cost of bringing enforcement actions, as other state licensing boards do.

The California Medical Association (CMA) is lobbying aggressively against the bill to oppose these modest steps toward patient safety, as the CMA has also opposed any changes to the cap denying injured patients justice.

Patient advocates who have survived, or lost loved ones to, medical negligence shared their stories and called for reform in testimony before the Senate Rules Committee, two joint Business & Professions Committee sunset review hearings, and before the Medical Board itself. They linked their medical negligence tragedies, that went unheard by the Board, to the need to give public board members the majority vote as a first step to begin to address consumer protection in California. Hear their testimony here.

“The Medical Board failed my daughter and many other young mothers and babies,” said Tracy Dominguez of Bakersfield at the Sunset Review hearing.  “The current system is broken.  We need a change and I believe a public board member majority is the change we need.  It is a starting point to rebuild the public’s confidence in a Board that puts the livelihood of doctors over the value of human life.”

The families are also advocates for the Fairness for Injured Patients Act, an initiative qualified for the November 2022 ballot that would update the cap on compensation for 46 years of inflation and allow judges and juries to decide in cases of death or catastrophic injury. Learn about the Fairness Act.

According to a recent report by the nonprofit consumer advocacy organization Public Citizen, California is worse than two-thirds of states in the country when it comes to disciplining doctors whose negligence or incompetence causes patients serious harm. Read the report here.

Watch the joint Business & Professions Committee press the Medical Board to explain its failures here.

Families who have had loved ones die or have experienced life-long harm due to medical negligence are denied justice in court due to the $250,000 cap on compensation that has not been updated for 46 years.  Grieving families then face a Medical Board enforcement process that protects doctors at the expense of mothers, babies, seniors, and other innocent Californians.

Consumer Watchdog’s patient advocate Michele Monserratt-Ramos also testified before the legislature about the difficulties grieving families face.  Monserratt-Ramos stated, “I can’t emphasize enough how incredibly difficult death by medical negligence or a death that could have been prevented is to cope with.  Yet when families seek accountability and justice through the Medical Board and through the legal system, we soon find there is none.”

“California is failing patients whose lives have been devastated by medical negligence,” said Consumer Watchdog Executive Director Carmen Balber. “The Medical Board fails to obtain basic facts from patients who submit complaints about harm, takes years to conduct investigations, and negotiates away punishment so repeat offenders get to keep practicing and put more families at risk. It’s time to strip doctors of the power to police themselves and give the Medical Board of California a public member majority.”

The stories of the families that are fighting for accountability to update the 1975 cap on compensation and for consumer protection with the Medical Board of California can be found here.