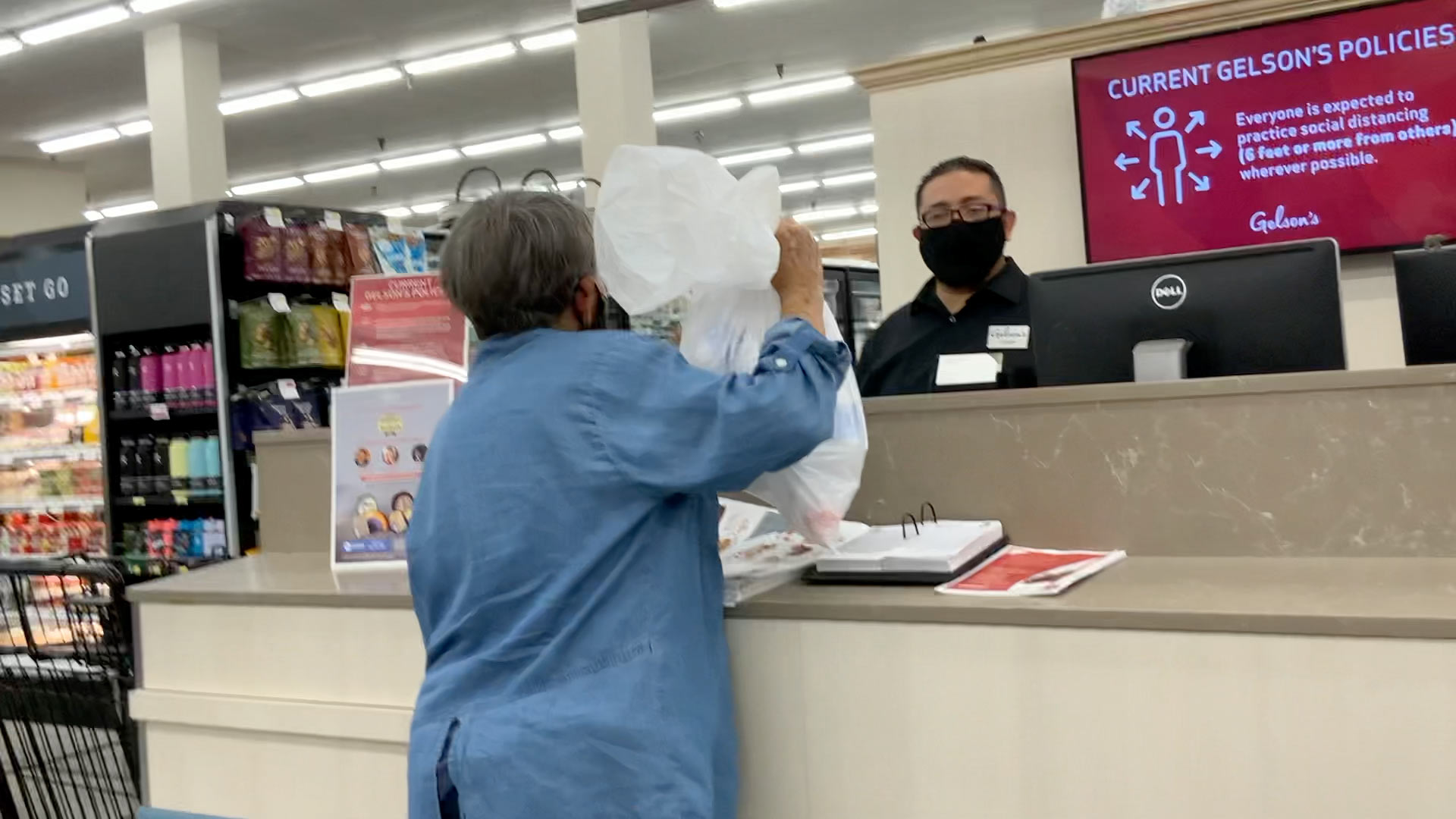 Los Angeles, CA — Nancy Hannickel, 75, a long-time resident of West Los Angeles, has bags of thousands of bottles and cans in her yard that carry a California Redemption Value (CRV) of a nickel or a dime.  But she can’t get those nickel and dime deposits refunded—anywhere in West LA.

Undercover video shot by Consumer Watchdog shows Hannickel being turned away from Santa Monica grocery stores legally required to take back and redeem her empties using the phony excuse of “Covid.”  Exemptions granted by Governor Gavin Newsom from store redemption expired last August and the Centers for Disease Control says Covid mainly spreads through droplets from person-to-person, not from touching surfaces. (https://www.cdc.gov/coronavirus/2019-ncov/daily-life-coping/food-and-COVID-19.html)

Not a single redemption center exists west of the 405 freeway and the grocery stores that are supposed to take back the empties are increasingly refusing to.

In the video, Hannickel urges support for California Senate Bill 38 that would require beverage companies to maintain accessible redemption centers and drop-off points.  The bill is expected to be voted on by the full Senate the first week of June.

“I’ve had a hard time returning empty CRV recyclables to markets,” said Hannickel.  “’Cause nobody wants to accept it. Absolutely no place is available. The closest place to recycle and that is pretty much just for scrap value four miles and that’s over in Culver City.  To try to make a trip with 50 items is not cost effective in any way. That totals out to $2.50 and that doesn’t even pay for the gasoline.

“So, I am very angry because it is frustrating and not worth my time but, darn it, there is a principle involved here. If they have taken my money as a deposit, I want it back.  I want full value and not scrap value.”

Hannickel  started recycling decades ago. In 2000, She redeemed enough containers to collect $2,000 a year in CRV deposit refunds. She used the refunds for extra pocket money, paying for gas and meals out. In 2017 through 2019, as a wave of redemption centers closures hit, Hannickel saw her annual refunds drop to $1,200 as return options fizzled.

Neighbors turned to her out of frustration, giving their empties to her instead of putting them into recycling bins.  She used to give CRV refunds back to their kids.

In 2020, as the pandemic hit, the rest of the redemption centers folded in her area. But the nearest grocery stores to her that are legally obligated to redeem containers refused to take back empties, she said.

The answer, says Hannickel, is SB 38.  Introduced by Senator Bob Wieckowski, the bill would shift responsibility for the deposit system to the beverage industry and away from the state’s recycling regulator CalRecycle that severely underpays redemption centers and overpays waste haulers that provide no container redemption.

“This system is broken. I cannot find a single place to turn in my bottles and cans for full value anywhere in West LA,” Hannickel said. “We need to start over with Senate Bill 38.  Senate Bill 38 puts the responsibility on the bottle makers to have and to fund the recycling centers. That is how it is working in the rest of the United States and the world.

“SB 38 will make certain that there will be a place for each of us to recover our deposit which was paid at the time we bought the beverage containers. Please support Senate Bill 38 so I can get these bottles and cans that have accumulated out of my backyard.”

Consumer Watchdog reported the stores to the state’s regulator CalRecycle.

Cost to Californians $10 Trillion by 2045 From Oil And Gas, Consumer Watchdog Reveals in New Report
END_OF_DOCUMENT_TOKEN_TO_BE_REPLACED