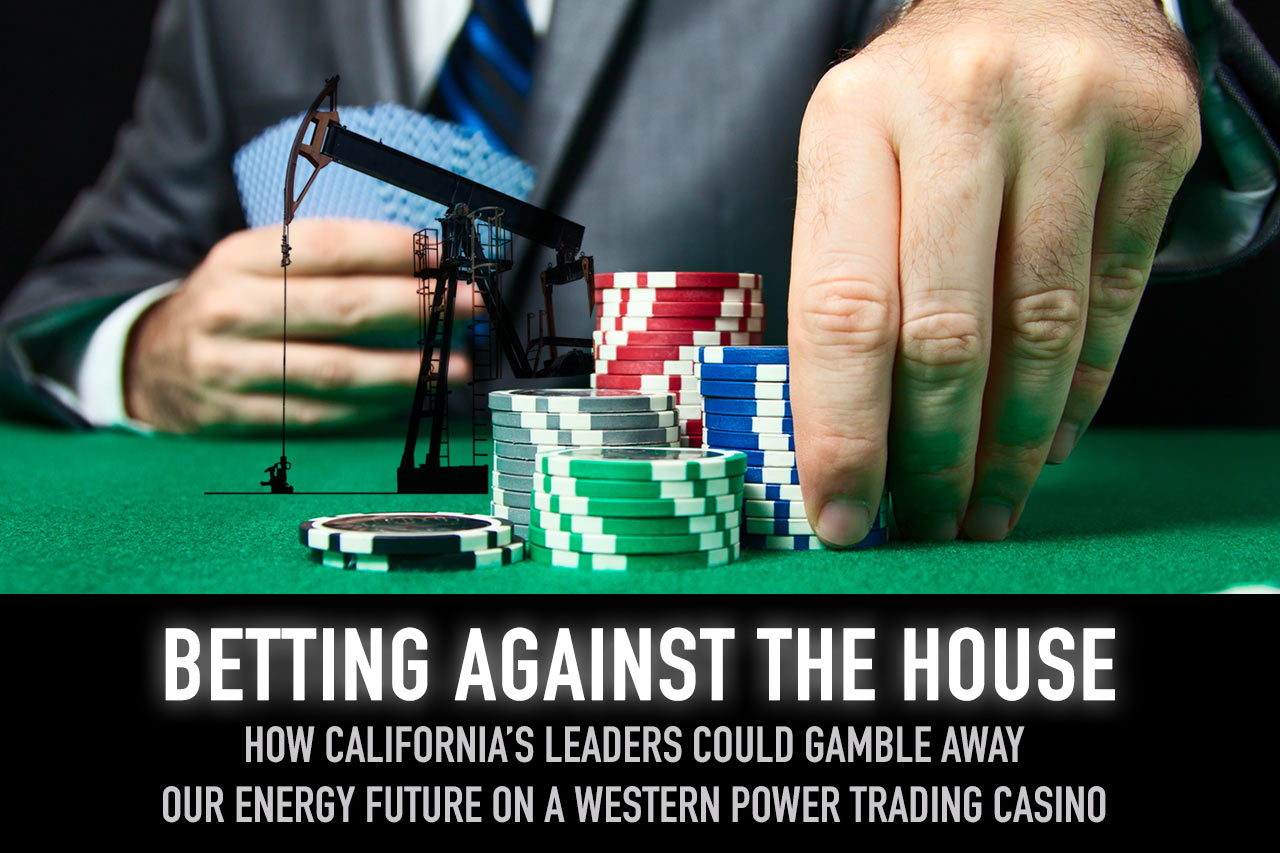 Los Angeles, CA— California leaders are being pressed by former allies of Enron and energy traders who ripped off the state to gamble away California’s energy future on the revival of a plan for a Western regional power trading system that will benefit billionaires and Wall Street and put ratepayers and the environment at risk, Consumer Watchdog finds in a new report.

The report reveals that legislation reauthorizing an Enron-era law, AB 813, authored by Assembly Member Chris Holden and to be heard Tuesday in the California Senate, is a scheme that will leave the market open to trading manipulation that will raise electricity rates. The plan will also undermine California's control of carbon emissions and pollution from power plants by empowering Trump appointees to overturn California laws.

Read the report, Betting Against The House: How California’s Leaders Could Gamble Away Our Energy Future On A Western Power Trading Casino, at  https://consumerwatchdog.org/sites/default/files/2018-06/BettingAgainstTheHouse.pdf

“Why would Californians support such a plan?” the report asks. “It’s backed by Governor Jerry Brown, a coterie of his former and current appointees, fixers for energy billionaires, and remarkably, representatives of ‘mainstream environmental groups’ such as such as the Natural Resources Defense Council’s Ralph Cavanagh that once promoted Enron.”

The report reveals, for example, that Cavanagh, the chief backer of the Western trading scheme now and of deregulation in the late 1990s, vouched for Enron, claiming, “Can you trust Enron? On stewardship issues and public benefit issues…the answer is yes.”

The report also uncovers a private recording of one of the principal backers of the legislation acknowledging the danger to California's environmental laws from Trump appointees at the Federal Energy Regulatory Commission (FERC) under the plan.

“Billionaire investors such as Warren Buffett, energy companies, and Wall Street banks see big profits off power exports to California, including coal power, that a regional power trading market would facilitate,” author Liza Tucker wrote. “They see big opportunities in building expensive new transmission lines underwritten largely by Californians to vastly expand a speculative commodities market in which contracts for electricity, whether dirty or clean, are bought and sold like pork bellies.

“But giving up control over California’s own power grid threatens new forms of Enron-style market manipulation that led to California’s disastrous energy crisis two decades ago, rolling blackouts, shrinking clean energy and efficiency investments, and a tab of some $40 billion to Californians,” the report states. “When traders run the casino, the house always wins and consumers are left at great risk.”

•California would no longer run its own electricity market. Legal challenges and federal preemption over interstate energy pricing could force California to buy dirty power generated in other coal-heavy states when the state’s three major investor-owned utilities are on track to generate half their retail sales from green energy sources by 2020, and today are largely free of coal. The Federal Energy Regulatory Commission, appointed by President Trump, has the power to dictate the market’s rules.

•Wall Street would profit at the expense of Californians. Since 2009, California ratepayers have paid $700 million for losses created via trading of an obscure financial instrument pegged to California power transmission rights. A Western regional market will only open up California to more sophisticated forms of the price-gouging that may already be occurring in California’s electricity market.

•California ratepayers could represent 70 percent of a regional market’s power demands, depending on how many Western states join. So, Californians could end up paying the lion’s share for multibillion-dollar transmission lines built in Wyoming, for example, to facilitate billionaires’ wind and coal power exports. These same dollars could fund renewable energy installations in California that are clean, local, and enhance the state’s energy security.

•Instead of the current board of directors appointed by California's governor, regulation and control of a new regional market would fall to self-appointed energy industry insiders with possible conflicts of interest, like those that ran California’s trading market during deregulation and turned a blind eye to price manipulation.

•California utilities could profit by importing cheap, dirty coal power and trading contracts for fossil-fuel power with distant Western states from vastly overbuilt gas-fired power plants at the expense of ratepayers. They could avoid contracting for more renewable energy on the theory that it will be cheaper to import but with no guarantee that it will ever materialize.

The report finds that the fixers pushing legislation to create this trading market include:

•Ralph Cavanagh of NRDC who vouches today for a Western wholesale power market just as he vouched for Enron and deregulation as a way to bring public benefits to California and accelerate a shift to renewable energy and increased efficiency.

•Dana Williamson, Brown’s former cabinet secretary, continues to push for the legislation, together with Cavanagh. Williamson was director of public affairs at Pacific Gas & Electric (PG&E) when Governor Brown appointed her and now runs her own firm. PG&E backed deregulation two decades ago, filed for bankruptcy during the crisis, and foisted its collateral damage onto ratepayers. Williamson served as deputy political director for Gray Davis’s re-election campaign in 2001-2002, and then served as deputy communications director. Davis was recalled in 2003 in the wake of the energy crisis.

•Board members of California’s current independent system operator that would be subsumed into running a regional system include energy industry insiders who have made money off energy markets or businesses and no rules prevent them from profiting personally off of a Western regional market. They include energy trader and former CEO of Deutsche Bank’s London global markets division during deregulation, Mark Ferron.

•Warren Buffett has a vested interest in selling power produced from dirty coal power plants as owner of PacifiCorp, a giant utility holding company serving millions of customers in six Western states that generates two thirds of its power from coal.

•Would-be green energy barons such as billionaire Philip Anschutz see California as a way to justify exporting wind and coal power at inflated prices over new and expensive transmission lines that Californians would largely underwrite.

•Don Furman—former lieutenant for Warren Buffett’s coal-heavy power companies—has peddled a slideshow on the Western power market that is thin on facts and thick on rhetoric that a Western power market will lower costs, pollution, and create jobs. In a private tape recorded phone conference, however, Furman candidly acknowledges that Trump appointees to FERC will fight to invalidate California laws should the Western market be created, which would undermine environmental and consumer protections.

•The three major investor-owned utilities benefitted from administrative and legislative favors under Governor Jerry Brown while donating nearly $10 million together with 23 other energy companies to Brown’s campaigns, pet causes, ballot initiatives, and to the California Democratic Party between 2009 and 2016. Brown’s sister, Kathleen Brown, sits on Sempra’s board and has collected more than $1 million in cash and stock since 2013 for her work.