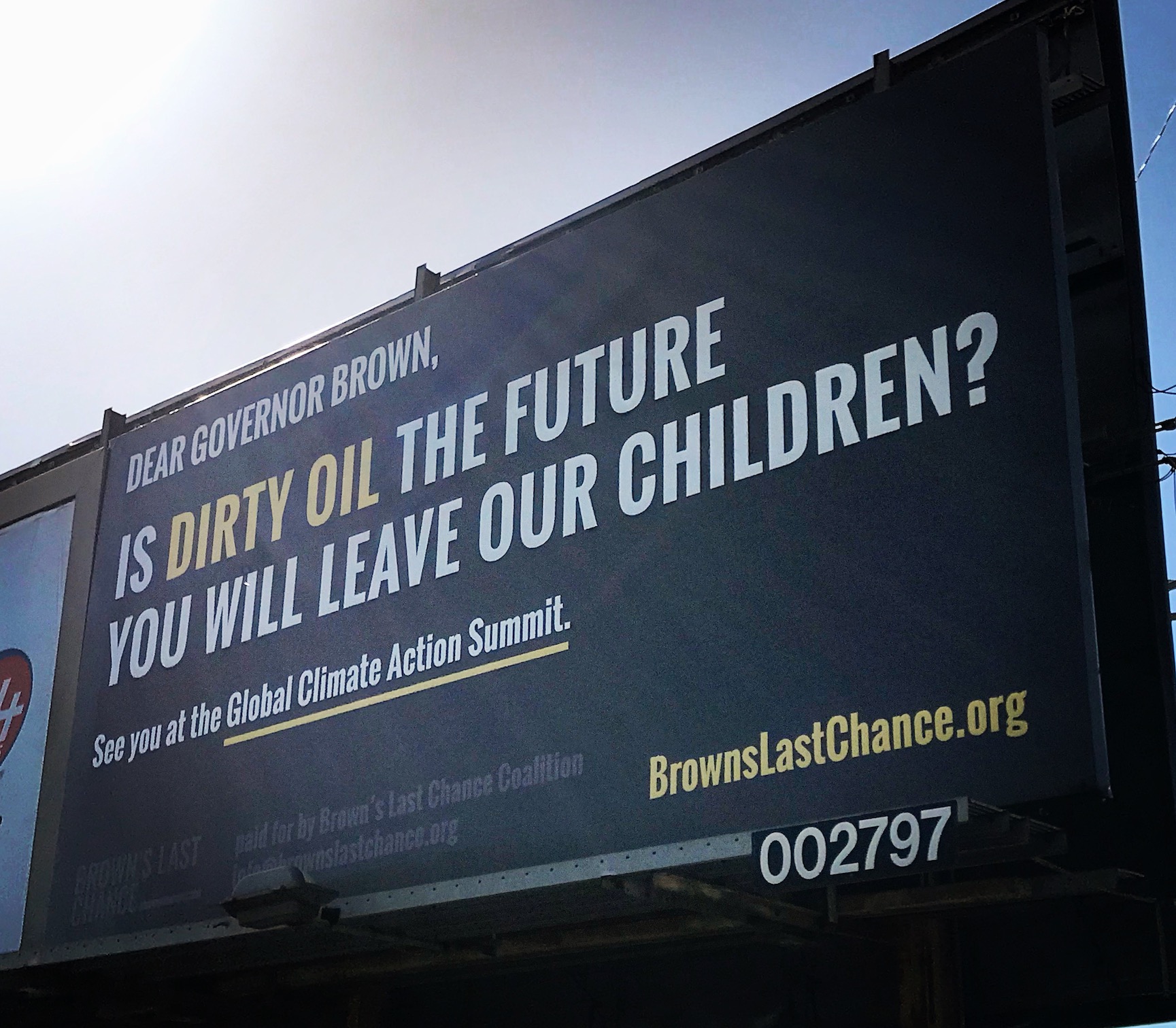 Five months before Governor’s climate summit in San Francisco, climate groups call on Governor to “walk the talk” on climate and stand up to the oil and gas industry

San Francisco, CA — More than 750 public interest groups from California and around the world kicked off a campaign today urging Governor Jerry Brown to stop the build-out of dirty fossil fuel infrastructure, keep oil and gas in the ground, and take immediate action to protect those most vulnerable to climate change or lose their support for the global climate action summit that he will host five months from now in San Francisco.

The broad coalition sponsored billboards in San Francisco, Los Angeles and Sacramento; placed a full-page advertisement in the Sacramento Bee; and launched a thermal airship over San Francisco Bay to challenge Brown for falling short on plans to limit fossil fuels in the state. The billboards, ad, and airship can be viewed at www.BrownsLastChance.com, a new website where the groups are rallying the public to join the effort.

“We, the undersigned environmental, health, justice, faith, labor, community and consumer organizations from California and around the world, strongly urge you to champion a vision for California that looks beyond the oil and gas industry to a future that is safe and healthy for everyone,”

“In order for us to support the summit, we call on you to:

1. Lead by announcing no new permits for oil and gas extraction, fossil fuel infrastructure, or petrochemical projects in California.

2. Set a global precedent by becoming the first oil producing state to announce a phase-out of existing production in line with the Paris climate goals, with a just and equitable transition that protects workers, communities, and economies, starting in places that are suffering most from the impacts of fossil fuel extraction.”

Read the full letter at http://brownslastchance.com/wp-content/uploads/2018/04/DearGovernorBrown.pdf

Brown is hosting the Global Climate Action Summit September 12-14 at Moscone Center in San Francisco. Idle No More, Mothers Out Front, Oil Change International and Greenpeace held a press conference on the sidewalk in front of Moscone Center to put Brown on notice that he has five months to act if he wants the summit to be a success. The groups unveiled a billboard on Interstate 80, near downtown San Francisco, quoting Brown’s own words to urge him to act. It reads: “Governor Brown, if dirty oil has us ‘on the road to hell,’turn us around. See you at the Global Climate Action Summit.”

Another billboard on Interstate 5 in Sacramento, which Brown uses to commute to his ranch in Colusa County, uses the words of Pope Francis to urge Brown to act: “What would induce anyone, at this stage, to hold on to power only to be remembered for their inability to take action when it was urgent & necessary to do so?”

Joining the groups were Californians whose health has been compromised by living near oil and gas drilling sites.

In Los Angeles, signatory representatives — including Communities For A Better Environment, Consumer Watchdog, Food and Water Watch, and Physicians For Social Responsibility — held a press conference with residents suffering from oil-related health problems on the edge of the largest urban oilfield in the US--Inglewood Oil Field. A billboard amidst the wells off La Cienega Blvd reads, “Dear Governor Brown, Is dirty oil the future you will leave our children? See you at the Global Climate Action Summit.”

The Brown’s Last Chance coalition said in the letterthat there is a gap between current state policies and what is needed to avert the worst effects of climate change.

Over the last seven years, Governor Brown has stood idly by while California has continued to aggressively drill for dirty oil, maintaining the state’s position as one of the U.S.’s biggest oil producing states. Without freezing the build-out of dirty fossil fuel infrastructure and new oil and gas drilling permits, the groups said that California’s commitments to climate goals outlined in Paris will not be met.

Greenpeace launched its thermal airship over the Bay Area and the Golden Gate Bridge with a message reading “Climate Leaders Don’t Drill” and “Say No to Fossil Fuels.” The spectacular aerial photos can be viewed at http://www.media.greenpeace.org/shoot/27MZIFJXOEKN8

Those personally experiencing illness from ongoing oil and gas operations and who had to flee the scene of disasters such as the biggest methane well blowout in U.S. history at the Aliso Canyon natural gas storage facility told their stories in Los Angeles as well.

“Frontline residents have long represented the health burdens of living near oil and we deserve better,” said Ashley Hernandez who lives near the Wilmington oil field, which is the third largest oil field in the US. “Living near oil drilling is no sanctuary. Governor Brown is not a champion to our frontline communities and is perpetuating environmental racism. We deserve justice at every level, including environmental justice.”

"While Governor Brown presents himself as a climate hero, we understand that he is still in bed with Big Oil and has received millions of dollars in contributions from fossil fuel corporations,” said Pennie Opal Plant, co-founder of Idle No More SF Bay and resident living near Richmond’s Chevron refinery. “During his most recent time as governor, there has been more fracking in the state, 17% more offshore oil drilling, toxic wastewater from fracking injected into over 500 aquifers - during the drought, and a push for the false solution of carbon trading which continues to allow the fossil fuel industry to pollute and emit greenhouse gases.  It's time for Governor Brown's words and actions to align and for him to work for real climate solutions and leave fossil fuels in the ground. We don't have a minute to waste in moving toward a fossil free world."

“The people of California’s Central Valley are forced to breathe some of the dirtiest air in the nation, and Kern County has the worst air in the United States, because of oil drilling,” said Cesar Aguirre, a community organizer with the Central California Environmental Justice Network (CCEJN). “Communities in Central valley are overburdened by several kinds of contamination, especially that caused oil and gas drilling. The climate crisis isn’t just happening in our atmosphere, it’s also happening in our lungs when we breath poisoned air created by dirty oil drilling. The more they drill, the worse the impacts for the health and safety of people in my community. It’s time for Governor Brown to step up, stop new drilling, and make a plan to get California off of dirty oil.

"Climate change is threatening the future of the planet and humanity, and fossil fuels are a huge part of that problem," said Greenpeace USA Executive Director Annie Leonard. "We are literally and figuratively digging ourselves into a hole with our addiction to fossil fuels, and the first thing we need to do to address the damage is to stop digging. This is the time for Governor Brown to set an example for all world leaders and phase out fossil fuels in California."

“As we look ahead toward the Global Climate Action Summit later this year, it’s time to take stock of our efforts to address climate change, and what we see is a troubling picture. Here in California, we continue to dig up the very fossil fuels that are destroying our climate at an alarming rate, all while imperiling communities across our state,” said David Turnbull, Strategic Communications Director at Oil Change International. “Governor Brown has a critical opportunity to show what true climate leadership looks like by putting California on a path to ramp down our oil and gas extraction and ramp up jobs that will move us into a cleaner future. We stand united with impacted communities to call on Governor Brown to embark upon the managed decline of the fossil fuel industry that our public health and climate crises demand.”

“California’s dirty oil extraction will undercut all the other progress our state makes fighting climate change,” said Kassie Siegel, director of the Center for Biological Diversity’s Climate Law Institute. “Brown’s global climate summit will be a sham unless he reins in the drilling free-for-all in his own state first.”

For the full list of the more than 750 groups signing the letter, http://brownslastchance.com/signed-orgs/