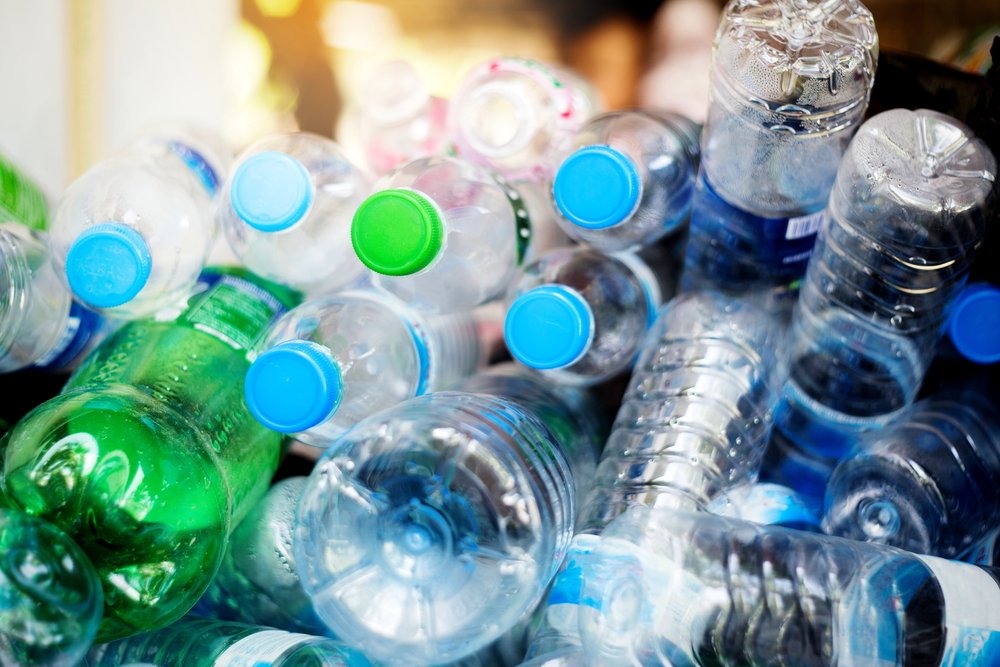 Los Angeles, CA — The latest data on the bottle and can redemption rate for 2020 for the first eleven months, put out by the Governor’s recycling regulator CalRecycle, show that only 58.9% of Californians who pay deposits on beverages from beer to sodas are directly claiming deposit refunds, Consumer Watchdog said today. The rate is a full 10% less than what it was at the beginning of 2020 and does not appear to be recovering.

The data are troubling because there should have been a rebound in redemption rates after Governor Newsom restored grocery store obligations to refund deposits in-store, which he had suspended from April 22 through August 22, 2020.

“We are at a permanent 60% redemption rate which is unacceptable, putting us third to last among ten bottle deposit states,” said consumer advocate Liza Tucker.

“We need Governor Newsom to spearhead major reform and modernize our bottle deposit system so that returning empties for deposit refunds is as easy as buying beverages in the first place.”

The deposit system was already suffering before the pandemic with redemption rates sinking. In 2013, the state had 2,600 redemption centers. The redemption rate was about 76%. Today, CalRecycle lists 1,222 certified centers on its website. But that number is likely substantially lower because many centers closed due to Covid and did not inform CalRecycle. If the 60% rate holds for December 2020, that would mean consumers left $587 million in state coffers that they could otherwise collect out of a total of $1.43 billion paid in nickel and dime deposits. 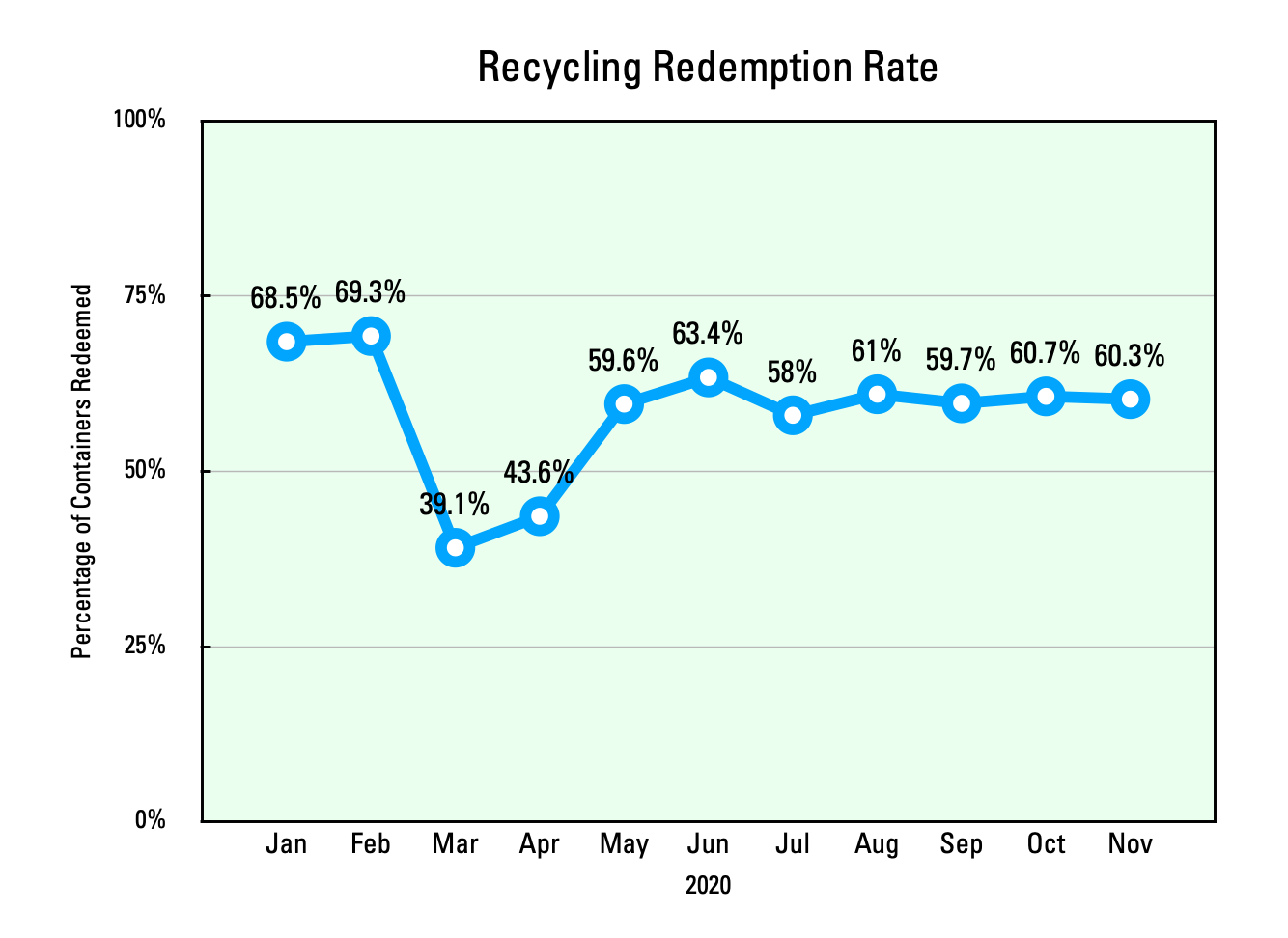 Consumers’ lack of access to redemption means that nickels and dimes have been building up in CalRecycle’s fund of unredeemed deposits. Between August 2019 and November 2020, an extra $140 million in cash has swelled the state’s Beverage Container Recycling Fund to roughly half a billion dollars. 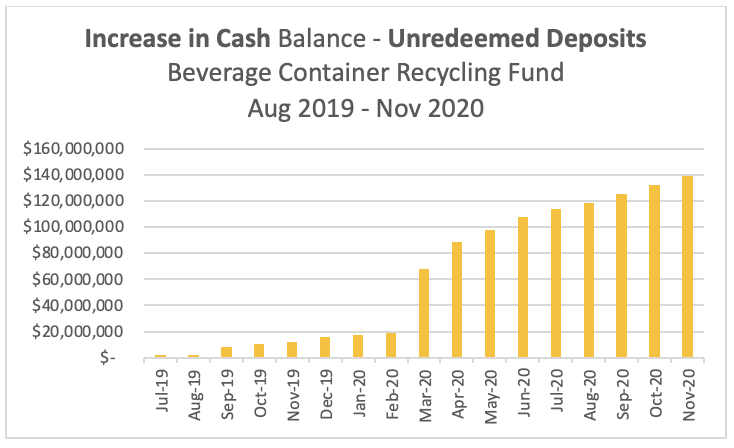 Newsom’s newly released budget directs CalRecycle to focus on “creating a true circular economy that recognizes waste as a potential economic resource to be reduced reused or remanufactured into new products.” A newly appointed director, Rachel Wagoner, has been directed to evaluate the existing deposit program and its system of payments in that light. Wagoner served as Newsom’s deputy legislative director and, prior to that, as chief consultant to the California Senate environmental quality committee.

In 2019, the legislature authorized up to $5 million to be spent on up to five pilot programs to expand redemption through July 1, 2022. Newsom’s budget proposes to spend another $5 million to finance more pilots through 2025-26.

“Unfortunately, the pilots funded to date are further limiting consumers’ return options or are still not off the ground,” said Tucker.  Culver City has only one operational pilot—a “mobile redemption center” in the form of a truck that takes empties and hands back cash. The goal of the Culver City program is to add a second location by rotating between two locations six days per week. The owner will be paid $1 million between October and June 2022.

“That is not innovation,” said Tucker. “Moreover, its existence lets 30 beverage retailers off the redemption hook in store. The pilots are depriving consumers of options instead of increasing them.”

When a pilot program starts, the area is considered “served” with redemption access. That relieves stores selling deposit beverages from redeeming empties in-store or from choosing instead to pay a $100 a day fee to the state. Currently, there are 5,234 stores in California that are required to redeem deposits. The list can be found here: https://www2.calrecycle.ca.gov/BevContainer/InStoreRedemption

Pilots in Irvine, Sonoma, San Francisco, and San Mateo have not started. “If they ever get off the ground, they will be paid millions of dollars for depriving consumers of in-store redemption options,” said Tucker. “The way to go is to put the responsibility onto the makers, distributors and retailers of deposit beverages to craft and run a bottle deposit system, as is done in the most successful programs in other states.  The state can start the transition now by putting serious money into building the architecture for a new deposit system such as the installation of Reverse Vending Machines and automated bottle drop redemption points at both centers and major supermarket chains instead.”

For more, see CalRecycle’s latest data on the amount of beverages sold and deposits collected as well as containers returned and deposit money refunded through November here:  https://www.calrecycle.ca.gov/BevContainer/Notices/#Rates

Analysis of the data is available for download here: https://www.consumerwatchdog.org/2020decbcrpmonthlyvolumereportcalrecyc…

Cost to Californians $10 Trillion by 2045 From Oil And Gas, Consumer Watchdog Reveals in New Report
END_OF_DOCUMENT_TOKEN_TO_BE_REPLACED