Will You Lend Your Resolve To Our 2019 Campaigns? 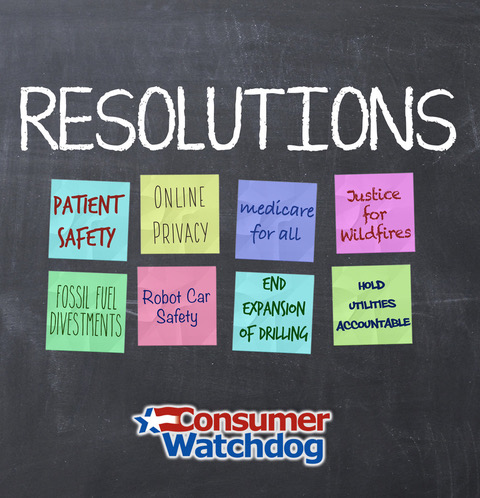 Given the divide in America, it’s truly been remarkable how much we have accomplished together in 2018. Below's just some of what we accomplished in 2018, and you can also watch this short highlights video about our victories.

The nation’s toughest online privacy law:  A new California law requires that companies tell you what information they collect about you, give you the right to say no, and are legally accountable for data breaches.

Landmark patient safety protections:California enacted a first-of-its-kind law requiring doctors to disclose to their patients when they are on probation for sexual misconduct, drug abuse and other offenses.  For the first time in 2018 doctors must also check a prescription drug database before prescribing narcotics.

Online accountability:A new federal law for the first the time holds websites civilly accountable for third party content, chipping away at a federal shield that has immunized Facebook and other companies for breaking the law.  Victims of online sex-trafficking can now sue websites that knowingly facilitate the abuse.

Wildfire victims’ rights were protected:  Despite an unprecedented push by PG&E and Edison, the legal rights of fire victims to sue the utilities for burning down their homes was preserved. The victory dealt a rare defeat to Governor Jerry Brown.

Health insurance companies must live up to their promises:Consumer Watchdog’s legal team finalized critical settlements requiring the state’s largest insurance companies to have enough doctors in their networks and to not misrepresent their doctors and covered services.

Insurance policyholders saved billions more:Our ongoing work holding California insurance companies accountable has kept up the $5 billion per year savings for drivers pinpointed by the Consumer Federation of America’s recent report on the impact of Proposition 103. And we protected those savings from an insurance industry attack that went all the way to the U.S. Supreme Court.

Our small, committed staff greatly appreciates any tax-deductible contribution you can make to help us realize our 2019 priorities.

Rules of the road for robot cars. We’ll build the drumbeat for new transparency and safety rules by exposing the shortcomings of self-driving cars.

The break-up of PG&E. Pacific Gas & Electric refuses to repair its power lines to help prevent wildfires – it’s time to turn over the reins to a public entity that can and hold the company accountable to wildfire victims.

Medicare for all. A majority of Americans now support giving everyone access to the health care they need.

No new oil drilling permits.To be a real climate leader, California must end new oil drilling and roll back existing fossil fuel infrastructure through a just transition that respects workers.

Justice for injured patients. It’s time we reverse a 43-year-old law that closes the courtroom doors on victims of medical negligence and make health care safer.

Thanks for all you do and all your support.