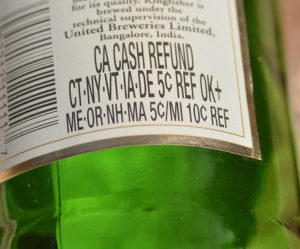 Los Angeles, CA -- Consumer Watchdog today condemned eleventh-hour legislation by Senator Steve Glazer, SB 643, that would exempt thousands of grocery stores statewide from the obligation to recycle consumers’ bottles and cans and return their five and ten cent deposits. The bill was amended Saturday to be heard during the last five days of the legislative session.

With recycling centers closing statewide, grocers and retailers are legally obligated to refund the $1.5 billion in bottle and can deposits owed to consumers annually. Glazer’s bill relieves retailers of that responsibility and limits the number of bottles and cans a store must recycle daily to 50.

“Consumers need grocery stores and retailers to redeem their bottle and can deposits, otherwise the ‘CRV’ deposit becomes little more than a tax,” Consumer Watchdog President Jamie Court and Counsel Mike Mattoch wrote Glazer. “It’s shocking that a Bay Area senator would choose to give grocery stores and retailers exemptions from their duty to redeem bottle and can deposits when the area has lost all but 64 redemption sites outside of those retailers. Eight million people have literally 64 recycling centers to go to in order to get their five and ten cent deposits back.

"Consumers already have to stand in line more than an hour to get their deposits back.  Where are consumers supposed to go to get their bottle and can deposits when grocery stores, drug stores and other retailers shut their doors?”

Consumer Watchdog noted new estimates from the The Container Recycling Institute that only about 250 redemption centers on grocery store lots exist statewide for nearly 40 million people.  Hundreds of other centers closed due to economic hardship, underpayment by the state, and, often, mistreatment by grocers who moved them out and opposed their fiscal relief.

“Californians plunk down $1.5 billion each year in nickel and dime deposits for our bottles and cans that we are supposed to get back. Only about half of the deposits come back directly to consumers because we cannot a find a convenient place to return our empties.

"A May survey by Consumer Watchdog found two-thirds of the 50 retailers visited who were legally obligated to redeem deposits refused. More than half of the all the state’s violations against beverage retailers over the last five years were for illegally refusing to redeem bottle and can deposits.

“We should not reward retailers who failed to live up to their legal obligations with new exemptions at the expense of consumers."

Another bill, AB 54 (Ting), was also amended Saturday to give more modest exemptions to grocers and retailers from redemption responsibilities. It gives them many more months to take back empties after the August center closures, but is stiill unwarranted as it does little for the consumers, according to Consumer Watchdog.