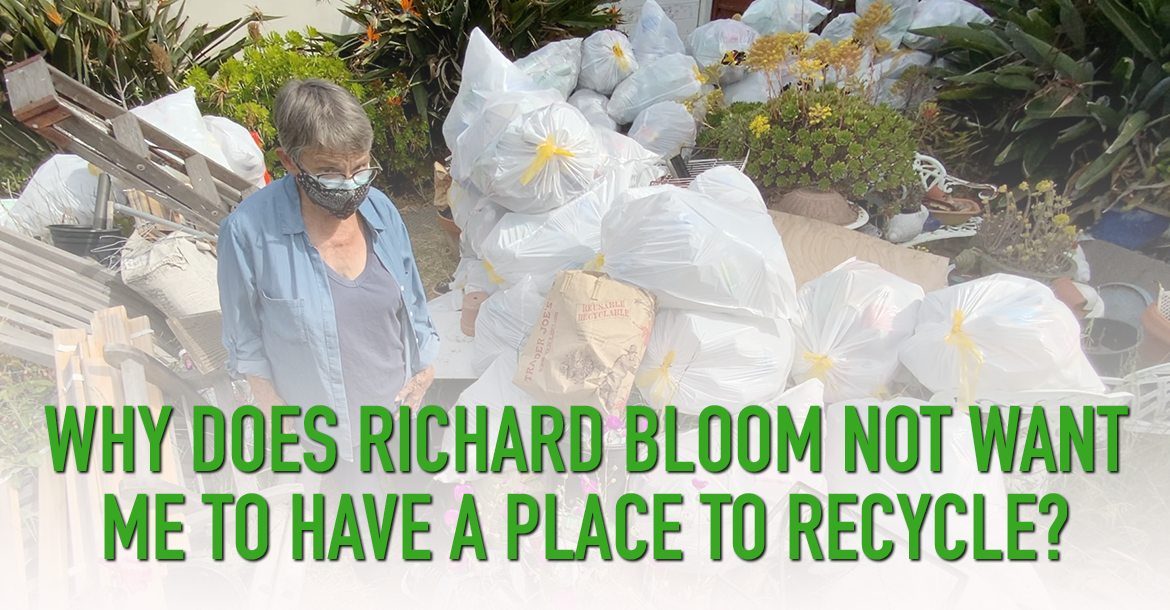 Los Angeles, CA — Legislation backed by the waste hauling industry and authored by Santa Monica Assembly Member Richard Bloom would make fewer grocery and other retail stores available to the public to accept empty cans and bottles and redeem California Redemption Value (CRV) deposits of a nickel or dime.

75-year-old West LA resident Nancy Hannickel has thousands of CRV bottles and cans in her yard because she can’t find a single place to refund her deposits in exchange for the containers anywhere in West LA, including supermarkets legally obligated to take them in Bloom’s district.

Bloom’s district has no recycling center West of the 405 freeway and only one in his entire district. In the absence of centers, retail stores of a certain size are obligated to either pay the state an opt-out fee of $100 a day or redeem bottles and cans, but as Nancy has pointed out in her video, have refused to.

In a new video documenting the grocery stores that don’t redeem, Hannickel raises the question, “Why Does Richard Bloom Not Want Nancy To Have A Place To Recycle?”  Watch the video here.

“Please Assembly Members Bloom and O’Donnell, please drop AB 1454,” she says. “It’s a disaster because it’s going to allow many more big markets to back out through loopholes. The likelihood of the way this thing is written, it’s going to make it a lot worse, not just a little bit worse, but there won’t be anything close. Again, the closest one right now is four miles one way meaning an eight-mile round trip. To make a trip with 50 items is not cost effective in any way, it totals out to two dollars and fifty cents, it doesn’t even pay for the gasoline.”

Analysis of AB 1454 (Bloom) performed by Consumer Watchdog, the Container Recycling Institute (CRI) and The Story of Stuff Project, concludes that, if passed, the legislation would not result in new recycling centers in underserved areas, and would let more supermarkets off the hook for redemption. It would also give millions more dollars in unjustified subsidies to waste haulers that contaminate high quantities of deposit containers thrown into curbside bins while billing the state for the CRV.

“AB 1454 provides nowhere near enough money to open redemption centers in areas desperate for them and lets more supermarkets off the hook for refunding consumer bottle deposits,” said consumer advocate Liza Tucker. “AB 1454 would push more containers into curbside recycling bins, which is why waste haulers back the bill.”

AB 1454 is set to be heard in the Senate Environmental Quality Committee on July 7th.

The bill reduces the number of currently required redemption centers by collapsing up to five consumer convenience zones of roughly half a mile around major urban supermarkets into one big zone. The current bottle law says that once a redemption center is established near a supermarket or on its parking lot in a zone, then beverage retailers do not have to redeem containers inside stores.

Expanding the zones to require only one redemption center in place of up to five means thousands more supermarkets automatically get off the hook for redemption. Currently, there are an average of four beverage retailers per zone, according to CRI. If five zones are merged to create one super-zone, a single redemption center could relieve 20 retailers of paying an opt-out fee that would save those retailers $730,000 per year for a single redemption center location. Taken statewide, CRI says, a total of 350 super-zones could allow retailers to avoid $256 million in-opt out fees. That is money that could be used to open centers and modernize the system.

“Many retailers will remain relieved of the burden of complying with the deposit law,” according to CRI. They will neither have to provide take-back opportunities in store nor pay the "opt out” fees, resulting in “permanent inconvenience for consumers.”

“CalRecycle should be enforcing existing regulations requiring retailers to provide in-store redemption (or to establish RCs in their convenience zones), rather than re-drawing convenience zone maps or paying curbside operators more per ton,” CRI writes.

“This retailer opt-out is a unique feature of California’s deposit return system, and one of the key reasons that the collapse of the state’s redemption centers has been so devastating,” according to The Story of Stuff Project. “Simply expanding these convenience zones, and therefore ensuring even fewer retailers would be expected to serve as points of return, would be counterproductive. Worse still, there’s nothing in the bill to compel retailers and grocers within these newly expanded convenience zones, to participate in the system. In short, all high-functioning deposit return systems are built on a return to retail model; we will not see California’s bottle bill achieve what it can as long as retailers can simply opt-out of their responsibility to take back bottles and cans.”

AB 1454 offers $15 million to open redemption centers for $50,000 a piece in forgivable loans, but market experts say that is much less than is needed to open centers in expensive underserved areas such as San Francisco, West Hollywood or in hard-to-reach rural areas. In addition, the bill grants $10 million a year to curbside haulers to improve the quality of the plastics that their collection methods contaminate in the first place. These payments “target the wrong sector” instead of the redemption centers that keep materials clean, said CRI, in effect encouraging the use of curbside programs over the deposit system that keeps containers cleaner and thus more valuable in the form of new bottles.

In the new video against AB 1454, Nancy warns that she has no nearby redemption center and that the bill won’t lead to one opening.