Feuer Has Yet To Answer For Corruption Charges 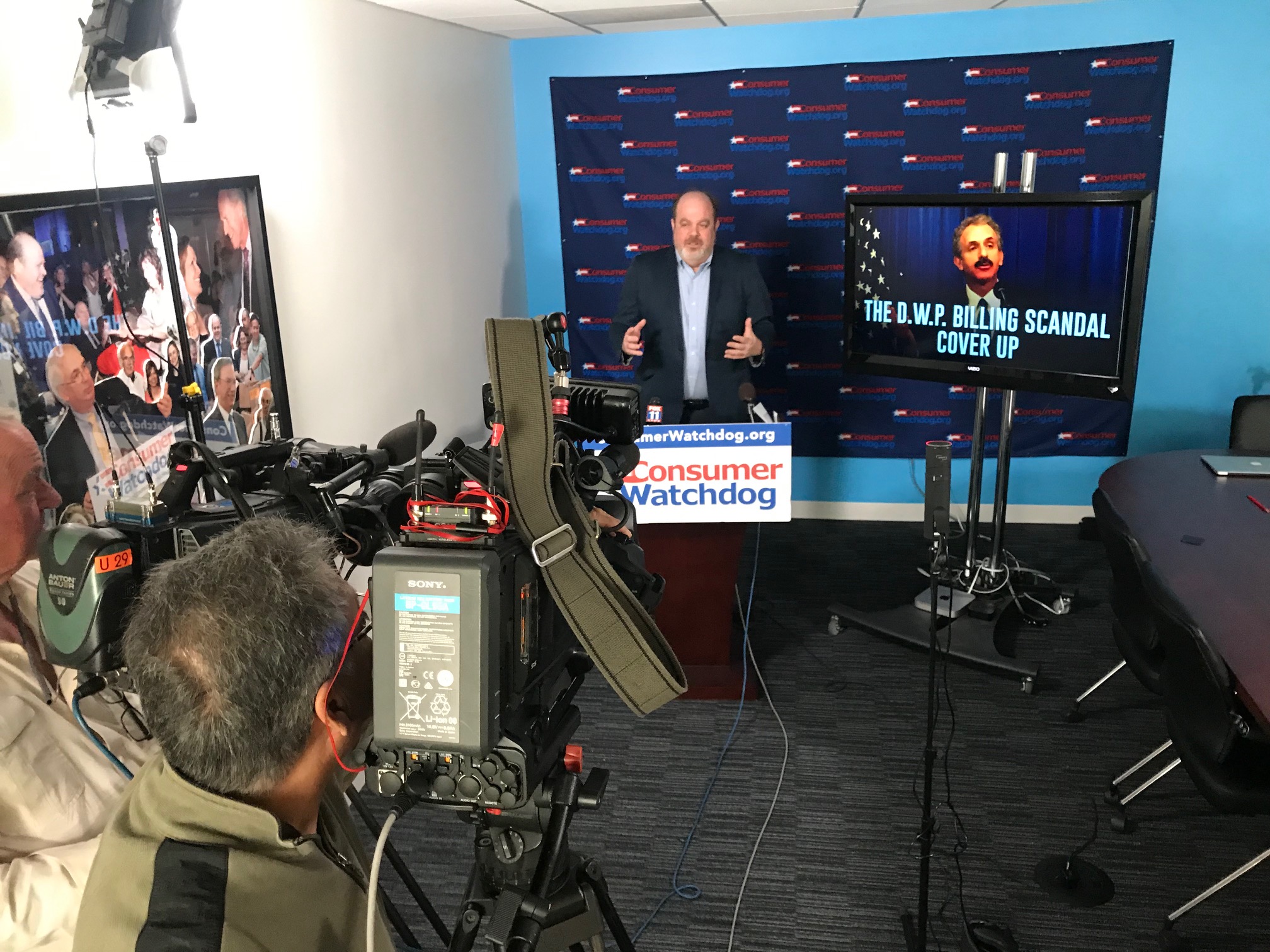 Los Angeles, CA --  Consumer Watchdog has called upon Attorney General Xavier Becerra to take over a public corruption investigation at the LA City Attorney's Office involving a conspiracy by just-resigned special counsels who colluded in a conspiracy to defraud ratepayers of relief in an LADWP mis-billing lawsuit.

View the slide show graphics from the press conference here.

Feuer has failed to respond to allegations and admit key facts, Consumer Watchdog said.  Mis-billed consumers were duped into believing they were getting a fair settlement when attorneys representing the City rigged the case for a phony settlement by controlling both sides of the case.

"One week ago we learned that a massive fraud emanating from the Los Angeles City Attorneys’ Office had been perpetrated on the court, Los Angeles Department of Water & Power (DWP) ratepayers and the public," Consumer Watchdog President Jamie Court wrote to Becerra today.

"At that time, Consumer Watchdog advised City Attorney Mike Feuer to remove his top aides, who were implicated in the matter, and turn the case over for investigation to the California Department of Justice or another independent agency. He has refused to do so and also publicly denied key facts and evidence brought to the attention of the court under penalty of perjury. Evidence suggests Mr. Feuer knew about the wrongful conduct. We now ask that you take over the investigation of the City Attorney’s misconduct in the matter of Jones v. DWP and report back to the public about your findings. The City Attorney cannot be trusted to investigate his own agency."

“Like so many people in Judge Elihu Berle’s court room Monday, I was sickened and appalled to learn of the conspiracy to defraud DWP ratepayers, the city and the court by attorneys in your employ and your top deputy,” Jamie Court, president of Consumer Watchdog, wrote to Feuer on March 6.

“This is public corruption of the worst kind. It involved a cover-up.  It also comes at a huge cost to ratepayers and the City,” Court wrote to Feuer.  “Your attorneys have disgraced your office by deceiving the court and the public.  Your office rigged the case to DWP’s advantage and private attorneys working for it profited by tens of millions of dollars in public funds.

Feuer has said he would begin an internal ethics review, but has refused to turn the matter over for outside investigation.

“Unrefuted testimony and evidence show that special counsels for the City Attorney, Paul Paradis and Paul Kiesel, secretly represented both the City, defending the cases by ratepayers over DWP billing errors, and the putative lead plaintiff in the case, Antwon Jones."

Last Wednesday both Paradis and Kiesel announced their resignations from the City Attorney’s Office after Consumer Watchdog's letter to Feuer.

“The City’s attorneys were double agents,” Court wrote Feuer. “They recruited Landskroner, drafted his complaint and controlled both sides of the case. That allowed the City and DWP to settle the ratepayer case inappropriately, without embarrassment or discovery, then turn around and sue company that installed the software billing system for tens of millions of dollars instead.”

Among the most salacious reports to surface this is that City Attorney’s special counsel Paul Paradis received $36 million in no-bid contracts under false pretenses. Aventador Utilities, apparently named after a $400,000 type of Lamborghini, operates out of $3.9 million oceanfront condo in Santa Monica that hardly looks like a legitimate business.

Paradis was paid millions by the City to defend the ratepayer case and while secretly representing the lead plaintiff too.

Court pointed out in his letter to Feuer that the corruption goes to the top deputies in Feuer’s office.

“Moreover, we learned that your top deputy Jim Clark and other members of the City Attorney’ office were aware that Kiesel and Paradis represented both the plaintiff and the City as defendant in the Jones case because they saw the documents that proved it. Mr. Clark quarterbacked both cases for you. None of the City Attorneys ever disclosed this nefarious relationship to the Judge, the public, Mr. Jones, or anyone else in the case.

“We also learned that Mr. Clark admitted under oath to destroying four to five pages of his hand written notes immediately before his recent deposition.

“We know as well that you were told of some of these serious ethical irregularities in June  2015 with Mr. Clark present. We assume you investigated these allegations and Mr. Clark reassured you that nothing was amiss – a reassurance we now know is false.”

Clark testified that he is sure he told Feuer about the conflicts of interest.

Court's letter to Becerra today concludes, "The City Attorney’s continued denials of conflicts of interest in the face of sworn testimony and documents should compel the Department of Justice to open an investigation and take over this matter to uncover all unethical and criminal conduct and to protect the public. When the lead attorney for the class of ratepayers who have been misbilled by DWP has to take the Fifth Amendment there clearly is a conflict of interest. The problems at DWP have a long shameful history.

Your office should immediately begin an investigation into the fraud, billing scandal, and public corruption the new evidence in Berle’s court have uncovered."