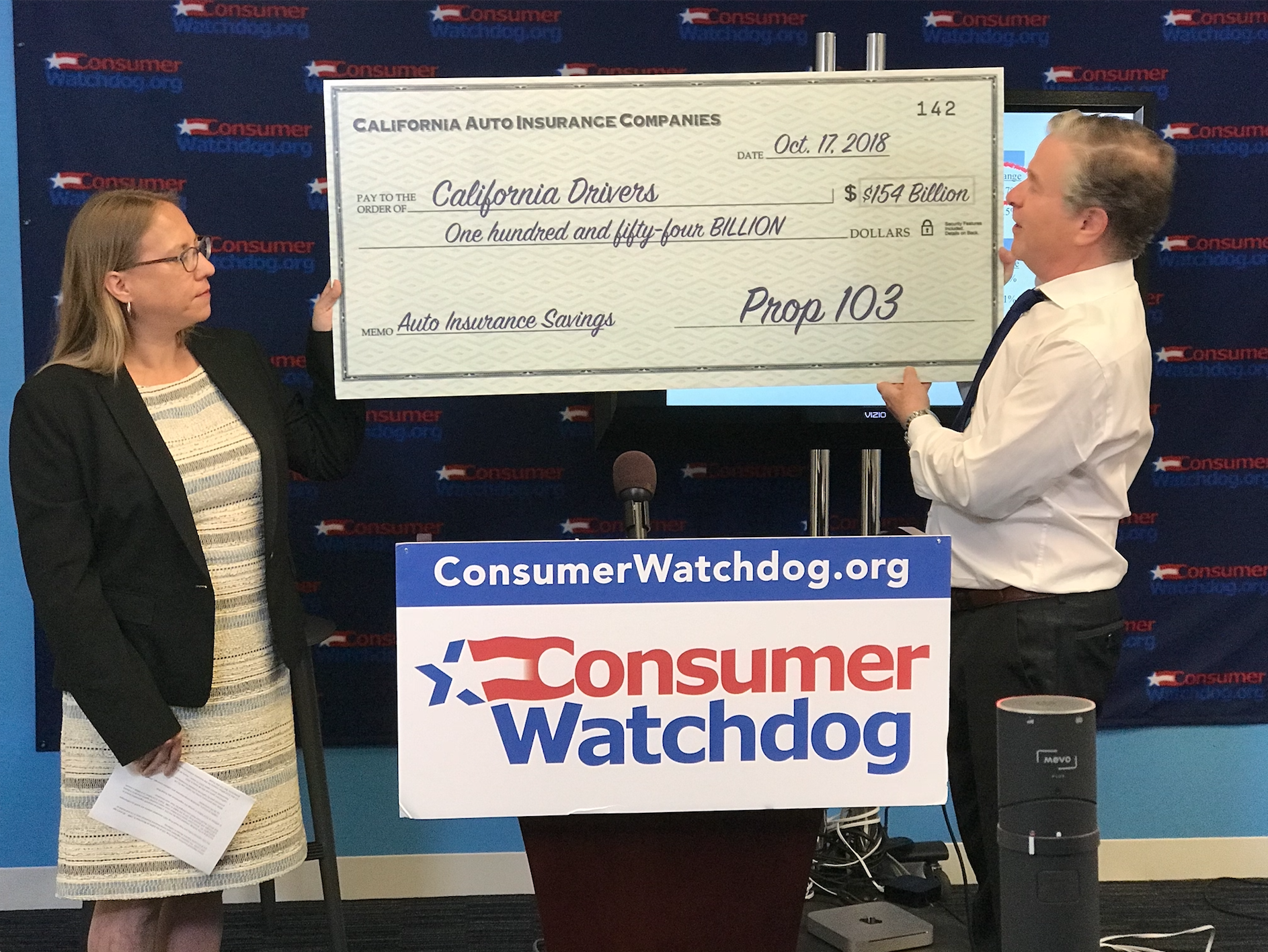 Los Angeles, CA– Today the Consumer Federation of America reports that Proposition 103, the insurance reform law passed by California voters on November 8, 1988, has saved drivers $154 billion on their auto insurance. The report also finds that the law has loweredauto liability premiums in California by 5.7% since 1989, even as liability premiums increased 58.5% across the rest of the country.

“Three decades ago, California voters joined together with tens of thousands of small donations to put Proposition 103 on the ballot and pass it, despite an unprecedented $63 million campaign of lies and deception by the insurance industry,” said Harvey Rosenfield, the author of Proposition 103 and the founder of Consumer Watchdog. “$154 billion is a 30th birthday gift from Prop 103 to the people of California, rewarding a battle against insurance company overcharges and abuses that has been waged every day for the last three decades.”

“As voters consider twelve different measures on the ballot next month that impact everything from housing to the food they eat, they have $154 billion in proof that citizen initiatives can change the way consumers are treated and make the system fairer,” said Carmen Balber, executive director of Consumer Watchdog.

Press Conference for Prop 103 saving California drivers $154B from Consumer Watchdog on Vimeo.

The Consumer Federation of America (CFA) , a national non-profit research and education organization based in Washington D.C., found that:

By giving members of the public the ability to monitor the insurance industry’s compliance with the law and challenge unlawful insurance premiums or abusive practices before the California Department of Insurance and in the courts, Proposition 103 has enabled California consumers to protect themselves against insurance overcharges and unfair rates.  Since 2003, Consumer Watchdog alone has invoked these procedures to stop $3.3 billion in unnecessary rate increases on auto, home, renter, small business and even the professional insurance that doctors have to pay.

The insurance industry has never stopped its attack on Proposition 103. Its lobbyists have sponsored countless bills in Sacramento to repeal parts of Proposition 103, sponsored two ballot initiatives to undo Proposition 103 protections, and continuously challenged the law in court. All of these attacks on 103 have been defeated.

The battle continues to this day. There are currently five proceedings in court and at the Department of Insurance to defend and enforce Proposition 103.

Proposition 103 requires that auto insurance rates be based primarily on a driver’s safety record, miles driven and driving experience. It requires all automobile rating factors be approved by the Department of Insurance and prohibits discriminatory rating factors including credit score, ZIP Code and race. Prop 103 prohibits excessive, inadequate and unfairly discriminatory auto, home and business insurance rates and requires insurance companies to open their books and justify those rates before they are approved. 103 applied the state’s consumer protection, civil rights and antitrust laws to insurance for the first time. It also created the funded public participation process to level the playing field and ensure consumers have the resources to hire the technical experts – including economists, actuaries, geologists and attorneys – needed to go up against the insurance industry. In addition to regulating rates, Proposition 103 made the insurance commissioner’s office an elected position that is accountable to the voters. Californians will choose a new insurance commissioner this November.