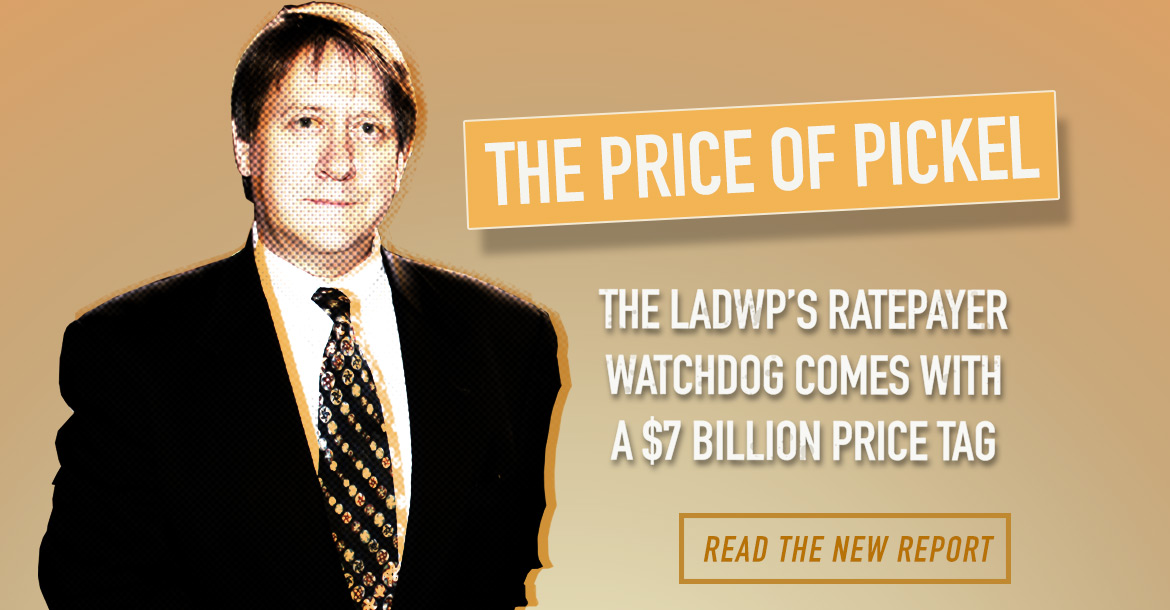 Santa Monica, CA — Instead of pushing the country’s largest municipal utility to be leaner, greener, and meaner, Fred Pickel, the first ratepayer advocate ever appointed to protect the interests of LADWP ratepayers, has fallen down on the job. A new report, “The Price of Pickel” by Consumer Watchdog, finds that his failure to speak up for ratepayers against unreasonable rate hikes and bad projects is costing ratepayers nearly $7 billion.

“While he was supposed to advocate for ratepayers, Pickel has endorsed or remained silent about questionable DWP decisions that cost ratepayers nearly $7 billion,” Consumer Watchdog’s report said. “The $6.93 billion price tag for Pickel’s consent includes rate hikes of more than $1 billion despite DWP’s cash reserves of $1.6 billion, hefty pay raises for DWP workers who are among the highest paid utility workers in the nation, surcharges on power bills that are not used to improve utility services, and billions to refurbish unnecessary natural gas power plants.”

•Pickel endorsed power and water rate hikes of $1.1 billion between 2016 and 2020 without questioning whether other monies might be available to offset rate hikes on burdened ratepayers when the utility holds $1.6 billion in cash reserves.

•Pickel endorsed a new 5-year IBEW contract in 2017 hiking salaries by 13-22 percent for a total $280 million when DWP employees are among the highest-paid utility workers in the country and earn two-and-a-half times more on average than other workers in comparable L.A. jobs. But he raised no red flags on unfunded DWP worker pension and post-retirement medical liabilities calculated at $3.8 billion by an independent watchdog.

•Pickel has not weighed in against spending $731 million through 2020—and a total of $2.4 billion by 2025—to refurbish vastly overbuilt and polluting natural gas power plants. But he criticized a successful solar program to pay large-scale commercial and residential developers for power sold back to DWP at a fraction of that tab for being too expensive.

•In 2017, Pickel endorsed as “affordable” for ratepayers a plan to shoulder up to $140 million annually during drought years to fund Governor Jerry Brown’s controversial North-South water diversion project, though ratepayers will not see additional water supplies from the scheme that subsidizes massive agricultural interests.

•Pickel has failed to improve customer service that ranks at the bottom of major Western regional utilities, starting with failing to fend off a massive, but avoidable, software billing scandal in 2013. The $193 million system is costing at least $20 million to fix, while a legal settlement calls for DWP to pay ratepayers back $67.5 million for rampant overbilling.

The report concludes that Pickel, appointed in 2012 by Mayor Eric Garcetti to head a newly created LADWP Office of Public Accountability, must be replaced. The office must be overhauled and granted investigatory powers.

“For the Office of Public Accountability to be a success, it must put ratepayers’ interests first,” the report said. “The City of Los Angeles needs an advocate, not merely an analyst whose bread the private sector has buttered and who favors the utility and its insiders at every turn. The ratepayer advocate should vocally spotlight politicians’ use of ratepayers as cash cows to cover for the city’s fiscal mismanagement and to reward political supporters. At every opportunity, the ratepayer advocate should be questioning whether the policies and practices of the DWP serve the interests of ratepayers, and he or she should fight to change them if they do not.”