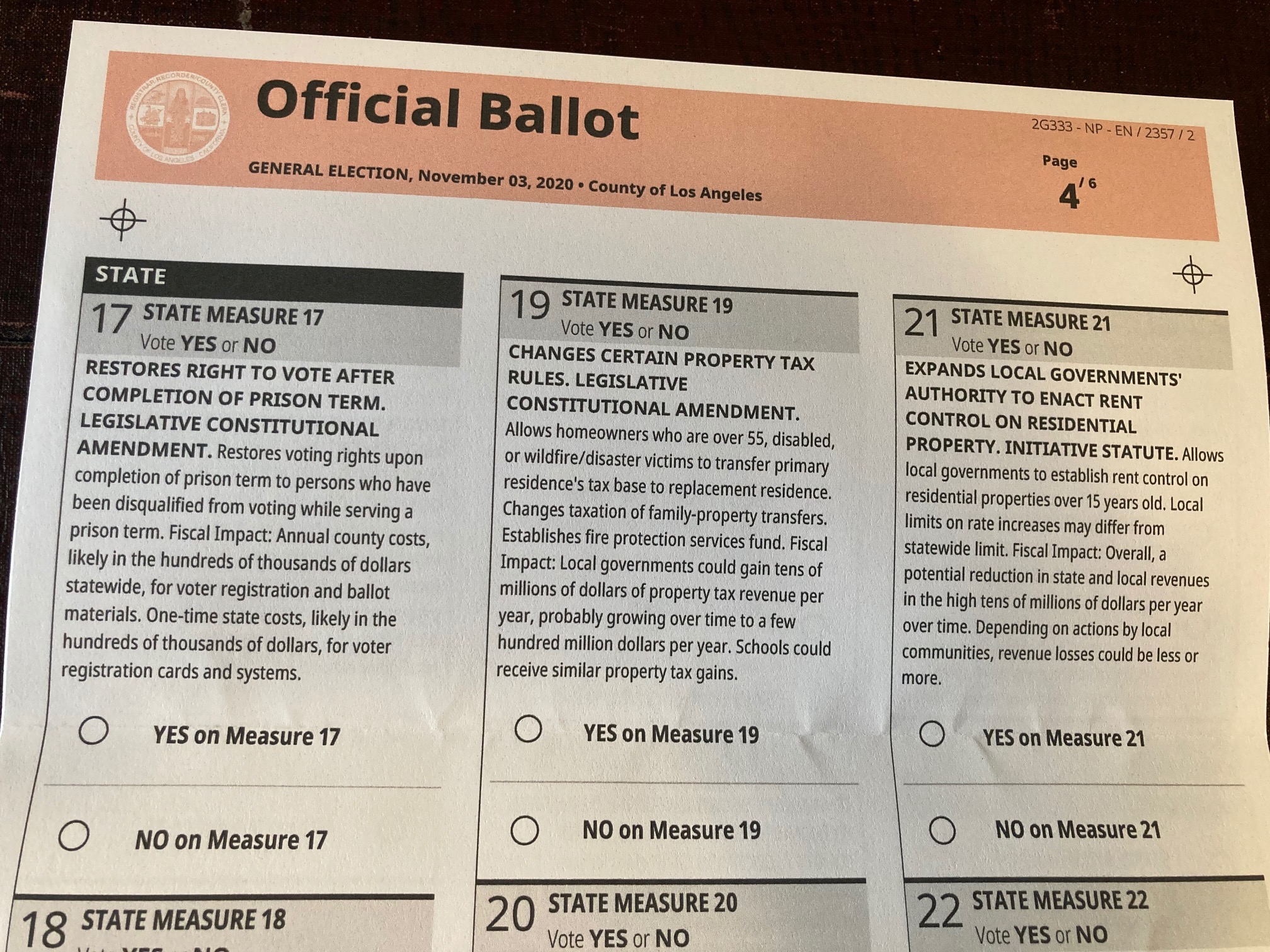 Wondering what the story is with the dozen statewide propositions on your ballot? We've had so many requests that, while Consumer Watchdog hasn't weighed in on every measure, I'm sharing my personal recommendations below.

The stem cell institute has been troubled by conflicts of interest, with research funds going to people with connections. Also, CIRM was created back when the federal government was impeding stem cell research, but they don’t any longer. So why does California still need to pay?

On the flip side, research is good, and the state would get royalties from any successful treatments developed.

Currently – under Prop 13, a tax law passed by the voters in 1978 – property taxes are locked in at the purchase price of the property, and are only reassessed at market rates when a property is sold. Commercial properties are infrequently reassessed, because it’s easy for corporations – that don’t die – to game the system by transferring control of property and avoiding a “sale” that would trigger higher taxes. This swung the tax see-saw wildly out of balance, pushing more of the tax burden onto younger and younger homeowners, slashing property tax revenue, shrinking local budgets and cutting off funds for schools.

Prop 15 would tax commercial properties at the current market value of a property instead, restoring billions in tax revenue to schools and local governments. Properties that would be reassessed under Prop 15 are, on average, worth twice as much as their current assessment.

The flip side is that it’s a rough time to raise any taxes. Prop 15 would mitigate that impact by not increasing taxes on the smallest commercial properties worth less than $3 million.

Prop 16 – YES
Restores affirmative action in California. In the 1990’s, amid a wave of anti-immigrant sentiment and backlash against affirmative action, voters took away state and local governments’ ability to consider race in hiring, contracting, college admissions and other settings. Prop 16 would restore.

Prop 16 combats structural racism by allowing the state to strive towards diversity, equity and inclusion.

Prop 17 – YES
Allows people on parole to vote in California.

The systemic biases of the criminal justice system mean that Black and Brown Californians are disproportionately disenfranchised after being incarcerated. Prop 17 restores voting rights to people who have paid their debt to society and rights that injustice.

Prop 18 – YES
Allows 17-year-olds who will be 18 on election day to vote in primaries. Prop 18 extends voting rights and could help make young people voters for life.

Prop 19 – LEANING NO
Allows people 55 or older and the disabled to keep their current (lower) property tax rate when buying a new home. Prohibits people who inherit a home from keeping lower tax rate if it is not their primary residence.

Pros: The argument is that keeping their current tax rate will allow some seniors to sell their homes who can’t currently because they can’t afford the higher tax rate that comes with a new home, and that could help the rest of us by opening up more housing stock The sweetener is a reduction in the existing inheritance tax break, meaning Prop 19 could raise overall property tax revenues.

Cons: Would increase wealth inequity by giving a new tax break to older property owners, who already pay less than younger homeowners. They would also gain a new advantage over first-time buyers (again younger and generally less wealthy) when purchasing a new home. The tax break would be extended even if a senior buys a more expensive home. Potential tie breaker: The California Realtors’ Association is the main proponent – they dreamt this up because they want to sell more homes.

Prop 20 – NO
Increases penalties for some property crimes and parole violations. On the ballot to reverse changes the voters approved six years ago, in Prop 47, that lessened penalties for the same non-violent crimes. Also requires new DNA collection for certain crimes.

Prop 21 would let cities decide if rent control is the right path to create more affordable housing and address the homelessness crisis. Exempts the smallest landlords who own one or two single-family homes. Limits rent control to properties over 15 years old, to preserve incentives to build new housing.

In the middle of multiple crises, the housing crisis demands an urgent response. We have to give cities every tool to pursue solutions for getting people into homes and keeping them there.

In 2019 the legislature passed AB 5, making gig workers employees and giving them the protections employees enjoy – including sick time, workers comp insurance, health benefits, overtime, etc. Prop 22 would instead maintain gig workers as independent contractors but grants them some additional benefits, including health benefit subsidies and accident insurance. While Prop 22 also says it guarantees workers will get paid 120% minimum wage – and wages were a big driver behind the original law – it doesn't count the time workers wait for a job. It's unclear if this would really result in higher wages for gig workers.

COVID has driven home just how important employee benefits are to workers. Prop 22 would strip these newly won rights from a lot of people. But with over $180 million poured into the Yes campaign, vs $10 million on the No side, you would be excused if you thought both sides are standing up for workers. It helps to know who's on each side.

Yes = Uber, Lyft, Doordash and other gig work tech giants. No = Every labor organization and union you can think of.

Prop 23 – YES
Increases regulations on kidney dialysis clinics. Prop 23 would improve patient safety at dialysis clinics by requiring: a physician be on the premises during business hours, infection reporting, and state approval before closing a clinic.

Prop 24 builds on our existing privacy law by letting you stop companies like Facebook and Google from using your sensitive information - like health, race, sexual orientation and precise geo-location - in their algorithms. It triples fines on companies who violate kids’ privacy, and creates a new state agency to enforce the law. It prevents those privacy rights from being taken away by the legislature, except by another vote of the public.

This is key: Prop 24 creates a floor for privacy protections in California, ensuring that the tech industry can't spend millions on lobbying in Sacramento to gut our privacy protections in the future. This one might look tricky because some privacy groups are split over the details and there’s a lot of misinformation out there. But opponents’ complaints largely fall into the category of wishing Prop 24 did more.

To learn more, listen to both sides debate Prop 24 on KPCC here.

The LA Times endorsement breaks down the choice well: “We could sink deeply into the history and the behind-the-scenes drama, but in the end, the questions for voters are whether Proposition 24 would make privacy protections stronger, whether it goes far enough to make a meaningful difference, and whether it would enable the state to provide even better protections in the future. The answer to all three is yes.”

Prop 25 – YES
Replaces the cash bail system with a risk assessment algorithm that determines whether someone gets released while awaiting trial.

Cash bail allows the wealthy to await trial at home while the poor get stuck in jail, and it’s time to get rid of a system that perpetuates this systemic injustice. But civil justice groups are split on this measure, with a main reason being those algorithms. They are likely to have similar structural biases. Some groups also fear that Prop 25 would put at risk more community-oriented approaches that  cities have implemented. But Prop 25 has a lot of detailed reporting, local approval, and local control, mechanisms built in so if it does not make things markedly better the fact should be apparent quickly and changes can be made by the legislature. It’s not perfect, but it moves in the right direction.