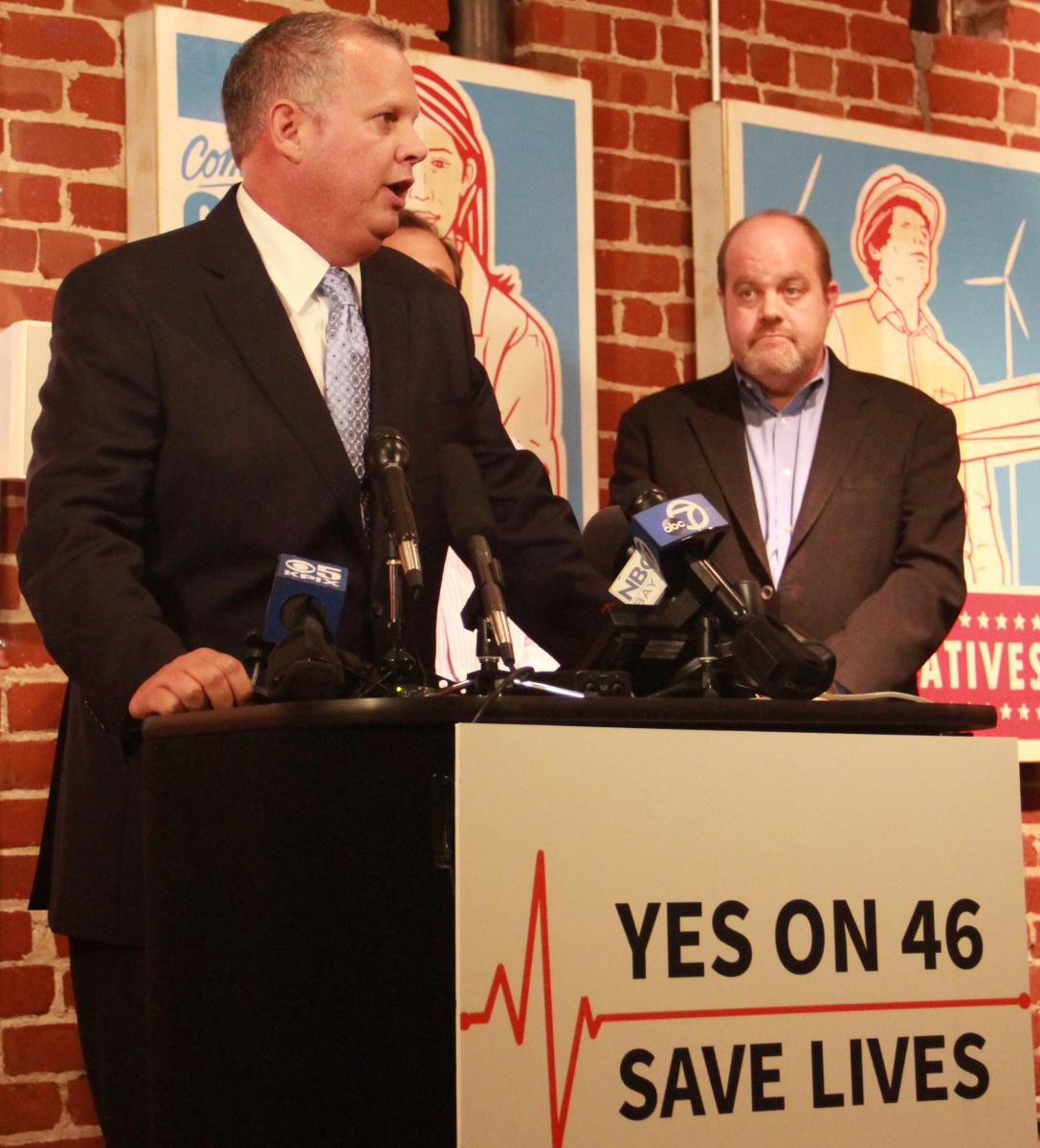 SAN FRANCISCO, CA – Dr. Stephen Loyd, a recovering drug addict who at one point was taking oxycodone and 100 Vicodin pills a day while working with patients, joined with Proposition 46 proponent Bob Pack and openly spoke about how easy it is for doctors to abuse drugs and get away with it.

Consumer Watchdog revealed that, according to a report on substance use among workers by the Substance Abuse and Mental Health Services Administration (SAMHSA) of the Department of Health and Human Services, an average of 511,000 medical professionals, or 6.8% of the total in the field, have abused or have a dependence on illegal drugs or alcohol annually.

“As a physician who survived substance abuse, I know first-hand that drug testing doctors is long overdue.  I reached the point where I was taking oxycodone and 100 Vicodin a day, but no one in the hospital said a word and I was still seeing patients as if nothing was wrong. I don’t know if I ever harmed a patient. I don’t even know how I survived,” recounted Dr. Stephen Loyd, recovering substance abuser and the White House's Office of National Drug Control Policy 2014 Advocate for Action.

“Doctors are the only profession I know that is trusted to police ourselves. But when my family realized how bad things were and tried to get my colleagues to help, they ran into the blue wall. No one was willing to report me because it could mean their jobs too. California has a chance to lead the country and break that code of silence,” said Dr. Loyd.

Dr. Loyd argued that Prop 46’s random drug and alcohol testing of doctors and a requirement that doctors check a prescription drug database before prescribing narcotics to new patients will work hand in hand to identify and prevent drug abuse. Tennessee already requires doctors to check that state’s database before prescribing narcotics to first-time patients. The mandate led to a 36% decrease in “doctor-shopping” in just three months.

Bob Pack, the proponent of Prop 46, lost his two young children, Troy, 10, and 7 year old Alana, to a drunk and high doctor-shopping driver who was overprescribed thousands of painkillers by multiple doctors despite having no physical symptoms. “We have DUI checkpoints to deter drivers from driving under the influence.  We need the same checkpoints to deter doctors from practicing medicine under the influence,” said Pack.

The survey asked whether an individual had abused or had a dependence on illegal drugs or alcohol in the past year by applying the definitions found in the 4th edition of the Diagnostic and Statistical Manual of Mental Disorders (DSM-IV), the definitive resource for doctors and other clinicians produced by the World Health Organization. The report used data from the 2002, 2003, and 2004 National Surveys on Drug Use and Health, which is an annual survey of the civilian population of the United States who are 12 years old or older.

Stress on the job, and easy access to controlled narcotics, are probably just some of the reasons why those in the medical profession have higher rates of illegal drug use, according to the survey. However, no state currently requires random drug or alcohol testing of doctors, even though testing is required of most in safety-sensitive positions.

Physician substance abuse is a serious problem in California. The California Medical Board has reported expert estimates that 18% of doctors will have a substance abuse problem at some point during their lifetimes, and 1-2% are abusing drugs or alcohol at any time. According to records obtained from the Medical Board, one in five physician disciplinary actions taken by the board in the last year was for alcohol or drug use.

Families Harmed By Medical Negligence To Testify Doctor-Run Medical Board Is Not Protecting the Public from Harm, Call for Public Member-Majority Board
END_OF_DOCUMENT_TOKEN_TO_BE_REPLACED