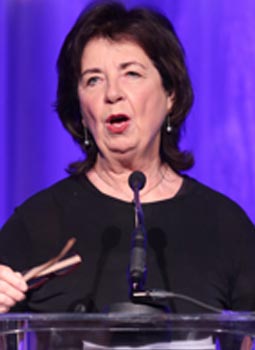 Retiring after 32 years with the California Nurses Association, RoseAnn DeMoro was executive director of National Nurses United, as well as the California Nurses Association/National Nurses Organizing Committee - the largest professional and labor organization of registered nurses in the U.S. She is one of the nation’s preeminent advocates for genuine healthcare reform and working people.

Under her stewardship as executive director, National Nurses United:

RoseAnn brought RNs across the nation together to lead the campaign to extend and improve Medicare to cover all patients and create a system of guaranteed health care. Senator Bernie Sanders marked RoseAnn’s seminal contribution to the fight for single payer healthcare for all Americans, saying: “When that vote in Congress takes place which guarantees healthcare to all…history will look back, and I mean this with all sincerity, look at the National Nurses United, look at RoseAnn DeMoro, and say thank you very much for making sure that all of us have the healthcare that we need.”

RoseAnn has been named “America’s Best & Brightest” by Esquire magazine, dubbed “The Most Influential Woman You’ve Never Heard Of” by More magazine, honored as among “America’s Most Influential Women” by MSN, and is one of only five people to be cited among the “100 Most Powerful People in Healthcare” for the past 15 consecutive years by Modern Healthcare magazine. RoseAnn also serves as National Vice President and Executive Boardmember of the AFL-CIO.

RoseAnn lives in Napa County and has been evacuated twice due to recent wildfires, watching neighbors lose their homes. She was the 2006 recipient of the Phillip Burton Public Service Award at Consumer Watchdog’s Rage for Justice Awards.

On World AIDS Day, an HIV+ Man Sues Doctor and Medical Group for Discrimination After Refusing to Provide Treatment
END_OF_DOCUMENT_TOKEN_TO_BE_REPLACED