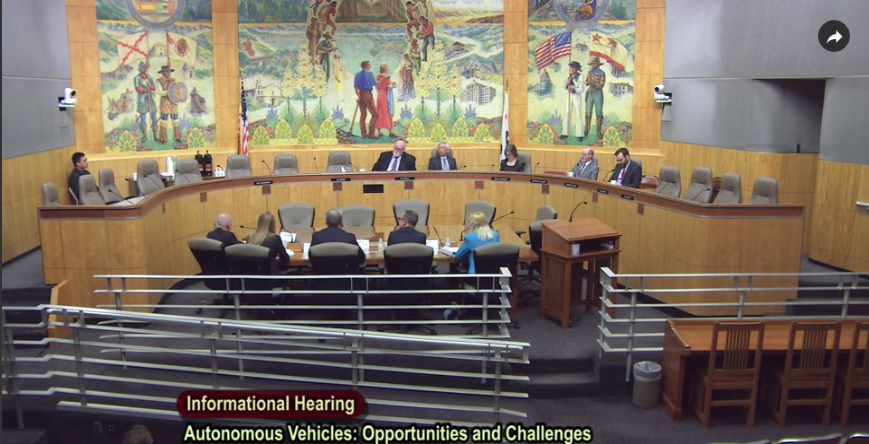 The California Senate Transportation and Housing Committee’s hearing this week, “Autonomous Vehicles: Opportunities and Challenges,” was meant to be an opportunity to field questions and concerns representing both public and private interests about putting self-driving cars on the road. Instead, the Senate committee’s investment in protecting corporate interests ultimately outweighed senators’ concern for the public.

Jean Shiomoto, head of the California Department of Motor Vehicles, stressed the importance of “striking a balance” between promoting innovation and ensuring public safety.  Senators, however, were dismissive of Shiomoto’s concern for safety and repeatedly questioned California’s (arguably already weak) safety regulations.

Senator Bob Wieckowski (D-Fremont) contended, “We’re supposed to be the leaders…it looks as if other states are taking the lead with our technology.” Like the majority of those present at the hearing, Wieckowski was concerned that states such as Arizona, which lack California’s more rigorous policy infrastructure, better incentivized robot car manufacturing companies to test and rapidly deploy robot cars. Arizona’s hands-off policy, Wieckowski and others implied, made it more likely for the state to become a natural home for robot cars, thus giving Arizona better access to a larger slice of the economic pie.

Consumer Watchdog has been pushing the DMV to acquire data from robot car manufacturing companies in order for more public transparency and accountability. Heeding this advice, the DMV released “disengagement reports” from twenty robot car manufacturers, currently the only publicly available data about the state of robot car technology. The DMV currently requires the 50 companies registered to test on California public roads to report all car crashes, claim $5 million in financial responsibility, and requires that a human test driver be present in an autonomous vehicle at all times. Arizona and other states have no such regulations in place.

The information in the latest disengagement reports proved to be alarming: in the best-case scenario, self-driving cars cannot travel more than 5,596 miles without requiring a human test driver to take over the wheel. In most cases, the vehicles cannot travel more than a few hundred miles without needing human intervention. Despite the disturbing information these reports revealed only a few weeks ago, neither members of the Senate nor robot car manufacturing companies seemed to have concerns about putting these cars on the road.

In fact, new regulations, which Shiomoto said will take effect on April 1, will allow robot cars to drive on public roads without a human driver present, despite the information revealed in the disengagement reports.  What’s more is that the California DMV only requires robot car manufacturers to release disengagement reports during the testing phase. No regulations are currently in place mandating public release of post-testing phase vehicle performance data to the public.

Despite the de-regulatory policies the DMV is already slated to implement in 2018, the Senate Committee pushed Jean Shiomoto and Bernard Soriano, CIO of the DMV, to defend their concern for public safety.

In contrast, Waymo’s Ron Medford faced little resistance from the Committee, despite making dubious claims about the potential safety robot cars promise. “NHTSA estimates that 94% of car crashes are because of human error,” he said. Robot cars have the potential to “eliminate human error” entirely, according to Medford.

Medford’s logic, which members of the Committee failed to question, is based on the presumption that every car on the road is a robot car. Unless the U.S. government plans to nationalize robot cars and give one to every single person in the U.S., illegalize all other vehicles, and prohibit walking and bicycling on public roads, robot cars will necessarily exist in a world among human error.

The disengagement reports revealed that one of the main problems with robot cars is their inability to predict human behavior. Even if the robot cars were to reach the highest level of perfection (which they are nowhere near, despite what clever marketing might have you believe!), robot cars will co-exist in a world with other humans, who will continue to act in unpredictable, non-robotic ways. Put simply: the robot car world will not be perfect, despite what the technocrats may have you believe.

But what, then, should be our path forward?

Rosemary Shahan from Consumers for Auto Safety, a panelist at the hearing, had a clear answer: “we want to see autonomous vehicles succeed…[but currently] there is a lack of federal legislation, lack of federal regulatory framework, lack of federal protection, and actual exemptions from FMVSS that have been on the books for a long time.”

Shahan’s criticism of what she calls, the Trump Administration’s “de-regulatory binge,” serves equally well as a warning to the California Senate that seems inclined to adopt a more de-regulatory stance akin to that of the federal government. The California DMV must require the highest level of public transparency and accountability from robot car manufacturers, and advocate for the public good, despite the opposing pressure it faces from private stakeholders and now apparently the California Senate Transportation Committee as well.