California lawmakers enacted the nation’s strongest online privacy law in 2018 with the California Consumer Privacy Act (CCPA), and voters strengthened that law’s protections at the ballot in 2020 with the California Privacy Rights Act (CPRA). In many areas, the law gives consumers greater protections than the federal proposal currently moving through the House, the American Data Protection and Privacy Act (ADPPA).

Federal preemption in ADPPA would override California's protections: exempting companies that provide data to government agencies from consumers’ privacy choices, leaving the law vulnerable to weakening by industry lobbyists, and swiftly canceling years of progress in California that has even spurred some large companies to expand those rights to consumers nationally.

It will also handicap the fight for reproductive rights.

That was the conclusion of the California Privacy Protection Agency, charged with enforcing our state law, in this letter opposing preemption sent to House Speaker Pelosi this week.

It was also one of Congresswoman Anna Eshoo's main reasons for voting against the ADPPA in the House Energy and Commerce Committee last month.

"The legislation should take head on the new world women are living in since June 24th the date of the disastrous Dobbs decision, which stripped the rights of women in our nation and potentially criminalized routine health care procedures," said Eshoo in a statement.

"The bill before us has a major loophole that could allow law enforcement to access private data to go after women. For example, under this bill, a sinister prosecutor in a state that criminalizes abortion could use against women their intimate data from search histories or from reproductive health apps. That loophole must be addressed."

Here are some key takeaways:

Don't get us wrong: Everyone in America deserves strong privacy protections. We especially like the piece of ADPPA's bar on discrimination that prohibits "disparate impacts" not just intentional bias when determining if a company's practices - and its algorithms' results - are fair. That's crucial to making discrimination laws work. But setting this up as one or the other is a false choice. American privacy laws have long created a national floor, above which nimble states can innovate to enact stronger protections as the need arises. ADPPA would be a ceiling.

There's one reason the tech industry likes the dichotomy: They don't want to comply with California's more stringent protections. Once Congress locks in a law we may not see movement again on the issue for decades. That's why it's incumbent on this Congress to get it right.

Interested in a comparison of the provisions of California's law and the federal proposal? See the chart below, or download here as a pdf. 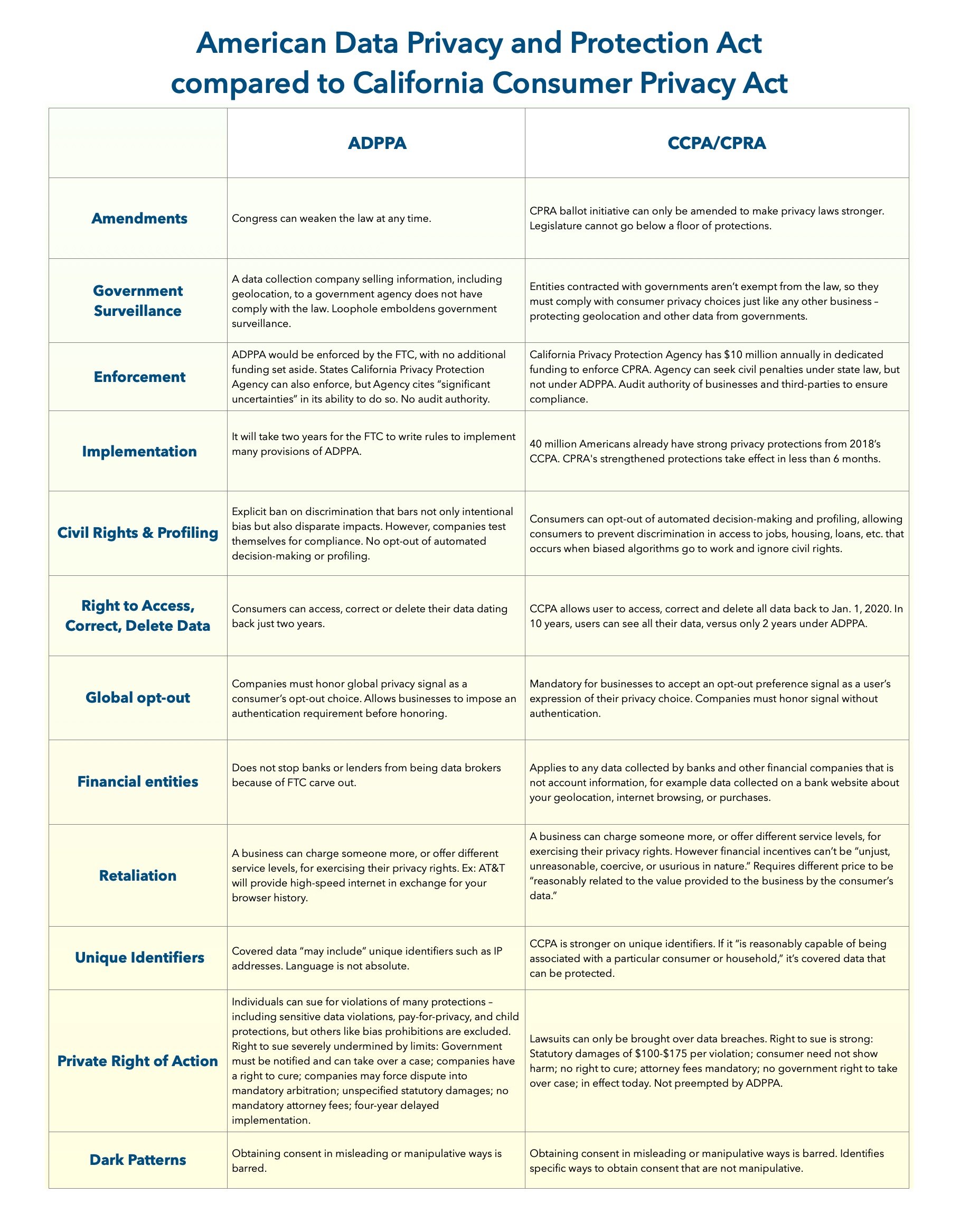