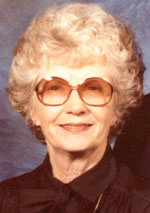 HMO doctors, paid through Medicare, failed to provide medical tests to diagnose and treat heart disease in my mother over a two year period. The HMO physicians failed to respond to cardiogenic shock emergencies.

My 72-year-old mother, Ruth MacInnes, was, for instance, diagnosed by a doctor at her HMO clinic as having an "inner ear infection" and was sent home with pills for dizziness. She was later hospitalized that night after she woke up gasping for air - she was in acute congestive heart failure.

My mother was terminally ill with degenerative heart disease, according to a cardiologist who reviewed records after her death, but her life-threatening condition and related increasing brain impairment would not be diagnosed until she finally collapsed six weeks later.

Most tragically, my mother was written off prematurely by HMO doctors. When she became semi-comatose, doctors urged tube feeding not be continued, per a living will directive executed prematurely. I reversed the euthanasia effort at 6 weeks. With tube feeding, my mother regained consciousness in 12 hours and lived another 7 and 1/2 months.

The Department of Corporations [in charge of regulating HMOs at the time of Ruth's illness] advised me that the HMO had provided, "unacceptable medical care for 3 years," according to their investigations. But no written audits have been released publicly about the actual problems uncovered by the Department, and no fine has been issued. There is currently no effective watchdog agency to monitor medical care abuses by doctors and providers. The legal deterrent to the kind of care which killed my mother has been eliminated in California.

It took the Medical Board five years to review my mother's case, and although they found that her doctors did not do a necessary diagnostic test, they took no action to discipline her physicians. Rather than purging the incompetent doctors that misdiagnosed my mother, the Department of Corporations instead purged my mother's file and all record of my complaint regarding her doctors and HMO. Because of the limits on compensation imposed by the Medical Injury Compensation Reform Act (MICRA) I was unable to find legal representation, and my mother will never receive justice.