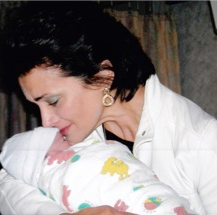 Mara Douglas was a devout Catholic, admired in her community for her selflessness and generosity of spirit. After raising three children of her own, she was able to dote on her two grandchildren. Then her world collapsed. She fell into a medical nightmare and died of pancreatic cancer on January 26, just four months after her diagnosis. Her story would have a different outcome had the hospital radiologist done his job properly in June of 2013.

Mara’s tumor was an inch and a half in diameter and inoperable by the time doctors at Scripps Mercy Hospital diagnosed it in September 2013.

Mara had undergone an identical CT scan of her pancreas three months earlier, when she went to Scripps Hospital in San Diego on June 4 for severe abdominal pain. If she’d had proper care starting then, she would likely be alive today.

However, the radiologist’s report described the scan as “normal…. no spots” or other abnormalities on the pancreas, and she was sent home.

The truth was that the first scan was far from normal. It clearly showed a tumor—a small one that would likely have been operable, saving or substantially prolonging her life. “Three months is an eternity when dealing with pancreatic cancer,” said John, Mara's husband.

For those months, Mara was prescribed ever-stronger pain medications with no other diagnosis than “perhaps a pinched nerve” in her spine. The radiologist’s statement had taken pancreatic cancer off the table in the eyes of her doctors.

In September, she was back in the same emergency room, 17 pounds thinner and in much worse pain. This time, the doctors delivered their death sentence. When asked specifically if the tumor had been overlooked in June, doctors and other staff members were elusive or refused to answer, said John.

An entry in Mara’s medical record by the ER doctor at Scripps Mercy Hospital on September 14th, 2013 was the first reflection of this mindset, stating that the “mass” on the June 4 CT scan was “not clearly seen.”

John requested Mara’s medical records including the June scan. He showed it to three outside radiologists, who all said the spot was prominent, pronounced and virtually impossible to miss. “The incompetence or carelessness of the radiologist deprived Mara of her life,” said John.

He still doesn’t understand how the scan was so carelessly read—or not read at all. “I know that if this happened to us it has happened to others and the parties responsible should be held accountable.”

Since Mara’s passing, her family has become all too familiar with California’s 45-year-old legal cap on malpractice claims that bar most individuals from even bringing their cases to court.

This is particularly true when the patient, like Mara, has died and no longer has future economic worth. From the medical industry’s viewpoint, Mara’s death protects the hospital and its doctors from meaningful consequences for their failure.