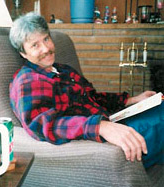 Just before Christmas two years ago, John Enzenauer, 39, came home from his blue-collar job feeling lousy. He didn't worry much about it: Just a mild case of the flu, he figured. Two days after Christmas, he was dead, leaving this life in the middle of the night while the Christmas wrapping still lay strewn around the tree.

In between lay a week of pain and frustration for him, and anguish for his wife and children. It was a week punctuated by bad calls made by doctors.

When it was all over -- or as over as a tragedy like this can be for the survivors -- the state's MICRA law continued to batter John's wounded family, leaving them not only without their husband and father, but also without the financial compensation they were entitled to.

John's ordeal began on a Monday evening when, feeling sick, he came home to El Sobrante from his job as a machinist at Chevron's Richmond refinery. He still felt poorly on Saturday, so he went to urgent care. They ran a blood test and told him he had the flu, but would be fine.

The next day -- the day before Christmas -- John stayed home while his wife, Cyndi, went to church. When she got back she learned that the urgent care doctor had called and told him to go to the emergency room if he was still feeling low.

"Nobody was frightened at this point," Cyndi says. "They kept telling us he was fine. My daughter and I went home and made the Christmas cookies" while John stayed at the ER. He remained there from noon to 9 p.m.

Eventually, after conducting a blood test, doctors told him he was bleeding internally, was anemic and had a bladder infection. But they assured him and his wife that he was going to be all right. They sent him home.

That night, John suffered through sweats and chills, and had trouble breathing. Nevertheless, the Enzenauers got through Christmas. On the morning of the 26th, "I awoke to him screaming," Cyndi says. John went to the ER at 7 a.m. and by 2:30 p.m. was in ICU, with pneumonia. He was in septic shock, and his body was shutting down. He went on life support.

When they told Cyndi, "I couldn't speak." Until that point, "we had believed the doctors, that they would do their jobs." Cyndi stayed with John until midnight, then went home.

Cyndi got hold of John's medical records and discovered that the results of the blood culture the hospital had conducted on Christmas Eve had been sent by fax and phone to the ER at 6:30 a.m. Christmas Day. But at 7:30 a.m. on the 26th, they were not in his chart.

Cyndi sued the hospital and three doctors. Two years later, the case was settled, with the swing shift, the day shift doctor and the hospital being held liable for misdiagnosing John's condition.

That wasn't the final page, however. Not only did the family have to cope with California's 1975 limit on non-economic damages, but their actual economic damages were not close to being covered either. One example of the law's unfairness: Had John worked until he was 65 he would have made $2 million. But a formula said he would have retired at 57, so the award was proportionately smaller. The formula also deducted 23 percent of the settlement that would have gone "for his personal consumption," since he is no longer here.

"I don't think anyone can get true economic damages" under the 1975 law, Cyndi says. "You have to settle for a lot less."

Cyndi would like to see reforms in the medical profession, beginning with medical school. Later, when doctors go into practice, information about their malpractice cases should be posted on their office wall, right up there with their medical school diplomas. "A diploma tells you nothing."

Cyndi also feels that good doctors should be working to rid the profession of the 5 percent of bad doctors who commit most malpractice and drive up the cost of insurance. Instead doctors circle the wagons in a manner reminiscent of police departments' "blue wall."

The system as it is further punishes victims, Cyndi adds. "It's not my fault my husband went to see the doctor. Why should my daughter and I be punished?" The child, now 8, "still cries at night. She says, 'I miss my Daddy.'"