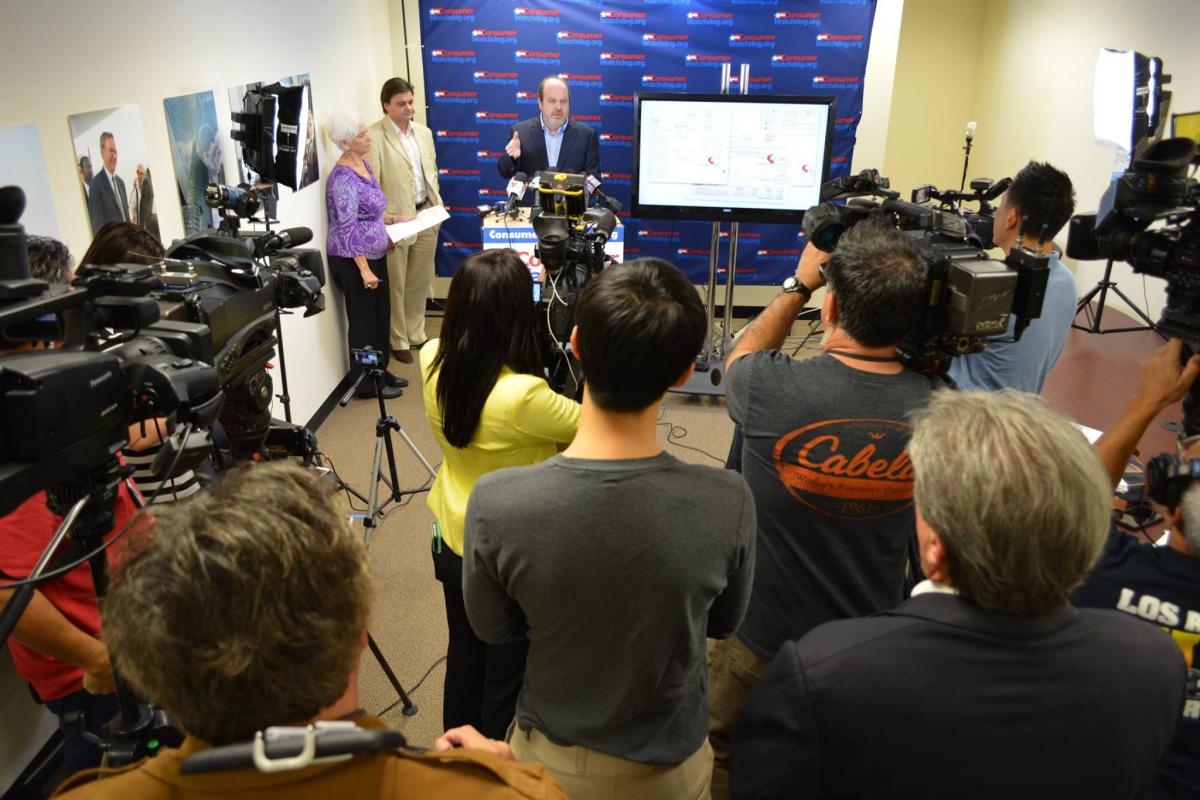 Los Angeles, CA -- Consumer Watchdog and overbilled ratepayers today urged Los Angeles City leaders to immediately fix or withdraw a “breathtakingly anti-consumer settlement agreement” over tens of millions of dollars in overbilling at the Los Angeles Department of Water and Power (LADWP). In a letter to Mayor Eric Garcetti and City Attorney Mike Feuer, Consumer Watchdog’s leaders said, “Both of your credentials as pro-consumer public servants are on the line now based on how you handle this settlement.”

The legal settlement was negotiated with a Cleveland lawyer who will control a $13 million payout in legal fees for his 87 days of work on the case. A Superior Court Judge holds a hearing on the settlement tomorrow (Nov. 3) and ratepayers gathered at Consumer Watchdog’s headquarters today for a press conference to explain the settlement’s fatal flaws.

“The proposed settlement broadly relieves the City of legal liability,” Consumer Watchdog’s Jamie Court and Liza Tucker wrote in the letter to Garcetti and Feuer. “But the settlement does not provide tens of thousands of customers that the City knows it overcharged a neutral forum to have their claims resolved. The settlement is so flawed that it is impossible for either the court or class members to know whether what over-billed customers are paid is fair, reasonable, or adequate or whether customers’ claims will be fairly resolved.

Read the letter at: http://www.consumerwatchdog.org/resources/lrtgarcettifeuerladwp10-30-15.pdf

“The faith of citizens of Los Angeles have been shaken time and again by scandal after scandal at DWP,” the letter continues. “This one-sided and corrupted settlement will represent another sad and disturbing chapter in DWP’s history if you do not intervene immediately.  It’s once again obvious that DWP managers cannot be trusted to reform themselves. Ultimately, it’s your responsibility to protect the ratepayers of this City.”

Consumer Watchdog’s letter asks Garcetti and Feuer to fix the deficiencies in the agreement. Among the problems cited with the settlement:

•    Defendants almost never get to unilaterally decide how much they owe defrauded customers in class action settlements, but in this case the LADWP decides the amount it owes overcharged customers.  With no relief formulas and criteria in the settlement agreement, class members will have no way to know if they are getting the proper amounts in exchange for a release of their claims and waiver of their rights to sue. Though the agency touts the promise that 100 percent of all damages will be paid, in fact customers will only get back 100 percent of the overcharge the LADWP determines the LADWP caused.

•    Consumers are being asked to release their right to sue or litigate over the claims before LADWP tells them how much they are receiving. How can the consumer make that decision without knowing ahead of time how much will be paid back?

•    The third party assigned to deal with disputes between consumers and LAWDP is Paul Bender, a utility consultant, who is much more likely to side with the nation’s largest public utility than any ratepayer.  The special master in the case is a law firm that represents large commercial customers against utilities and has a conflict between the special master’s financial relationship with an entity he will have to negotiate with time and again, as opposed to a single ratepayer.  •    The settlement is silent on the subject of how much customers who were under-billed will end up paying through back billing. But ratepayers are being asked to waive their rights to sue or dispute the back bills as a condition of joining the settlement.  The settlement should release customers from their back bills. The city should seek the costs of those back bills from its case from the company who built the faulty billing system.

•    There is no transparency in the claims process for ratepayers so that they know how the determination of a refund was arrived at. The city should be required to turn over to the ratepayer and an independent ratepayer advocate all information in the file about the ratepayers’ billings so that they can access the validity of their claim.

“Make no mistake, this settlement is not fair to ratepayers,” Consumer Watchdog’s letter said. “It is an inside job between the LADWP and an attorney who doesn’t truly represent the interest of the community. Given all of LADWP’s problems, and its desire to raise rates in the near future, this settlement will reach none of its stated legal or political goals. It will shortchange, confuse, and anger ratepayers.”

“Fortune 500 companies facing multiple class action lawsuits on a high profile issue typically look for a beholden plaintiffs attorney they can settle with on the weakest terms for a large attorneys fee and see if an overburdened judge will sign off,” the Consumer Watchdog letter said. “That is clearly the tactic the LADWP is taking here. But LADWP is not a Wall Street corporation with a fiduciary duty to maximize profits for shareholders, but a public utility with a duty to be transparent and accountable to the community, and to you Mayor, the public’s representative.  The LADWP should not be allowed to ignore the interests of ratepayers and it’s your responsibility to stop the LADWP.”