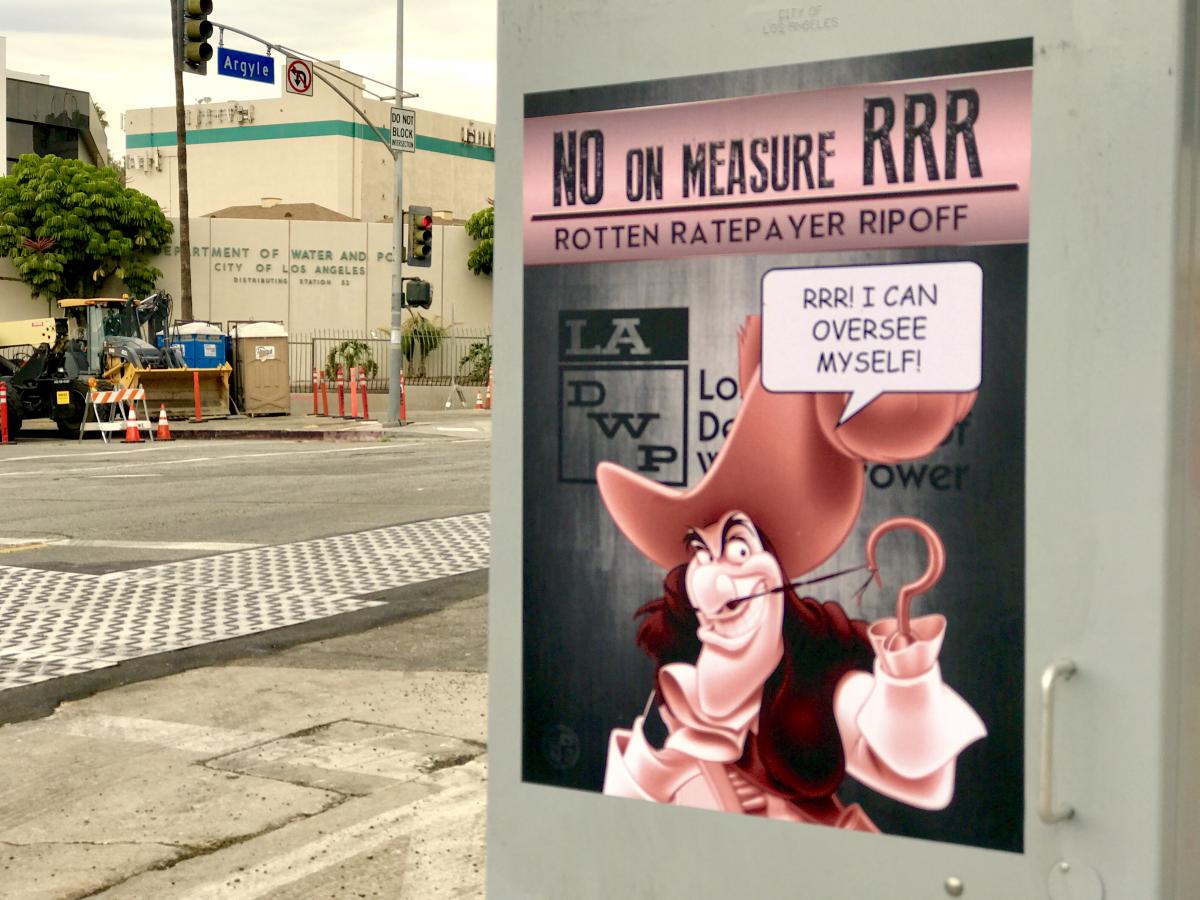 The public interest groups joined with DWP ratepayers facing disconnection over high bills they say they don’t owe, to condemn DWP’s unaccountable bureaucracy and ask voters to oppose RRR, so as not to make DWP even less accountable.

“Voters should remember that Measure RRR is a rotten ratepayer rip-off that is of DWP, by DWP and for DWP, with the end result that ratepayers will have even less recourse and face higher rates, more fossil fuel-based power, and more outrageous deals for insiders,” said Jamie Court, president of Consumer Watchdog.

The groups pointed out that the ballot measure contains deceptive language that allows unelected commissioners to sign multi-million dollar long-term contracts without City Council approval, removes all City Council oversight over power contracts up to 30 years in length, and in some cases takes away the City Council’s power to veto contracts entirely, advocates said.

“RRR centralizes power in the hands of unelected, unaccountable bureaucrats,” said Brenna Norton, Senior Organizer with Food & Water Watch. “Rather than solve the many problems at the LADWP, the measure would weaken public oversight over crucial decisions that impact our bills, service, and the future of our public utility. This dangerous language would directly undermine our Councilmembers’ ability to ensure public dollars are being spent wisely and not wasted on sweetheart deals with private interests.”

For example, the DWP Board of Commissioners could move to privatize a new water recycling or treatment facility without City Council approval and existing oversight, said Norton. The LADWP signed up the biggest private water company in the world, Veolia North America, for consulting services in 2014. The City of Pittsburg has sued Veolia for $12.5 million claiming it created problems like faulty automated water meters and elevated lead levels in drinking water. “There is ample evidence that such contracts often force unjustified rate hikes, worsen service, and lead to environmental harms,” Norton said.

In addition, DWP is already flouting a City Council vote to study moving the city to 100% renewable energy. Its draft report on plans for its future energy mix relies on carbon-emitting natural gas for 35 percent of its energy. Its own figures, charted by Food & Water Watch, show how much more expensive fossil fuel options are compared to renewable energy like solar.

For the visual presentation and charts, see: http://www.consumerwatchdog.org/resources/finished_rrr_presentation.pdf

One of DWP’s retrofitted plants would be in Pacoima where Patricia Thomas lives. A retiree on a fixed income, Thomas said she saw her water bill triple in the space of a few short months when her trees were dead, her grass was paved over, and she was traveling for a month. As it is, she can’t pay the latest $500 bill.

“I’ve worked hard all my life and I refuse to give DWP all my money, especially when I know this bill is wrong,” she said. “RRR is just a smokescreen for them to continue to overcharge and do what they want to do.”

Chatsworth resident Sandy Frasca said that when she got a back bill last year for several thousand dollars, she paid it to avoid disconnection just as relatives were arriving for Christmas. Then, she got a bill with a credit, so when she got no bill for the next 18 months she thought that was why. Instead, she got a disconnection notice and another bill for $8,000. She’s still fighting it. “They are really not on the side of the people,” she said.