While Garcetti Sails For Higher Office, Delta Tunnel Protesters Show Up at His House 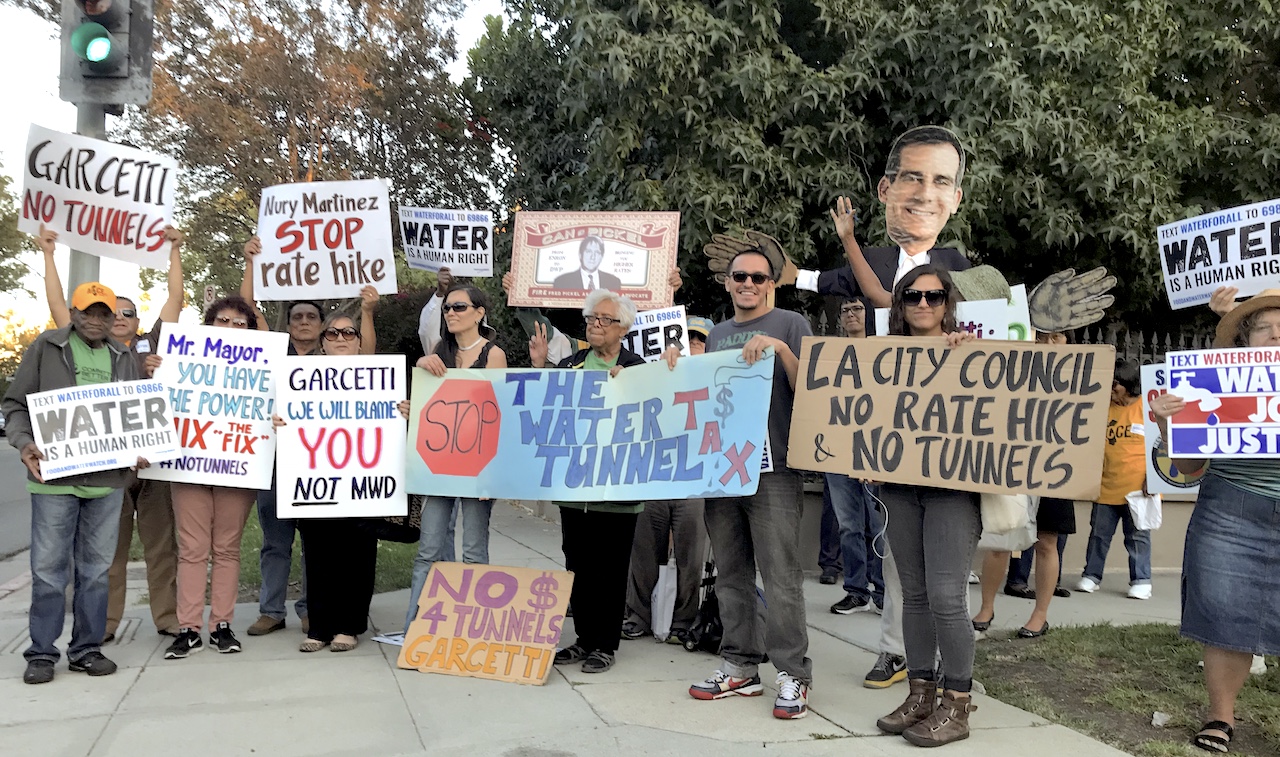 If you were to go looking for Los Angeles Mayor Eric Garcetti right now, you’d have a hard time. The media has taken note, with the L.A. Times asking “Where in the World is Mayor Garcetti?” Downtown News asks “What in the World is Eric Garcetti Up To?” L.A Weekly asked “Has Mayor Garrett Been Away From L.A. Too Much?” While questions swirl as to where Garcetti’s ambitions might lead him, the Hollywood Reporter has been able to confirm at least one place Garcetti will be appearing: in the remake of “Valley Girl.” So it would make sense that if we needed to bring an urgent matter to his attention, we might as well just show up at his house.

Demonstrators gathered outside the mayor’s residence in Hancock Park yesterday evening to ask Garcetti to come out against the Delta Tunnels project, which would stick LADWP ratepayers with $2-$4 billion for water that won’t come anywhere close to Southern California. An ecological nightmare, the risky re-routing of the California Bay Delta to tunnel more water to big agriculture in the Central Valley would only appeal to Mayor Garcetti if there were backers of the tunnel project that could someday be backers of his own groundwork.

LAPD instructed us to move across the street from the Mayor’s residence, citing newly-enacted regulation from the LA City Attorney saying that demonstrators had to stay 100 feet away. They also told u a bullhorn was not allowed. Nonethelss, our colorful handmade signs reading “Stop the Water Tunnel Tax,” “Garceti, No Tunnels,” and “No $ 4 Tunnels” were greeted with honking from passing traffic while advocates spoke to the assembled crowd.

“Garcetti got elected to hold DWP accountable,” announced Brenna Norton from Food & Water Watch. She explained how Garcetti has received money from billionaire farmer Stewart Resnick, who uses more water each year than all L.A. & Bay Area homes combined. “Our water system is crumbling,’ she emphasized. “So Garcetti, if you’re on the side of ratepayers, you will oppose a massive rate and tax increase on DWP rate payers and you will use your influence.”

“What we need is for Eric Garcetti to show that he really is the people’s representative and that he’s standing up to big money like he said he was when he was running,” I added. “We need him to both ‘Can the Pickel,’ fire Fred Pickel as Ratepayer Advocate…and we need him to come out against the Delta Tunnels, because he is looking down the road and this will haunt him if he takes this opportunity to turn his back on the people. And so everyone here today are just the ones that know about this now. Once they find out, ratepayers, that they’ll suffer this bill, you better believe there’s going to be hell to pay.”

On October 10, the Metropolitan Water District Board of Directors will vote on whether to underwrite the project, which would put Los Angeles ratepayers and taxpayers on the hook for up to $2000-$4000 per household as yearly average.