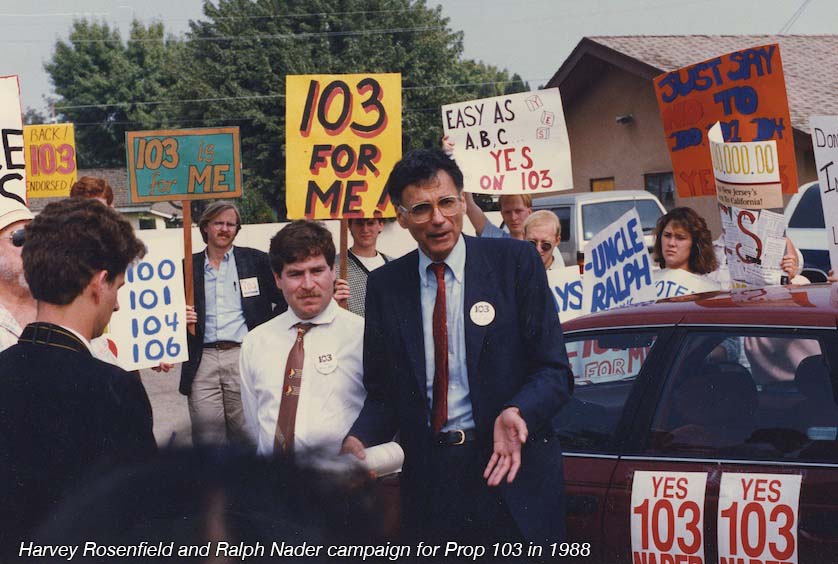 “Why do you trust Harvey?” an angry insurance company flack asked a newspaper reporter a few weeks ago.

They’ve been asking that question for thirty-three years, ever since California voters defied the odds and stunned the American political establishment by passing Proposition 103. 103 rolled back auto, home and business insurance rates, required insurance companies to open their books and justify their rates, and gave consumers powerful new rights that have saved motorists an estimated $154 billion since 1989.

It just drives the insurance industry and its allies crazy that a handful of advocates at Consumer Watchdog have been able to take on the legions of insurance industry lawyers, public relations firms, academics, and the politicians in their pocket – and win, time after time.

Your tax-deductible contributions are what makes us successful.

To pass Proposition 103, we had to defeat three insurance company counter-initiatives backed by a $63 million campaign to sow distrust between Californians and pit the wealthy against the middle class and the poor. We’ve defeated five more insurance industry-backed ballot measures since and countless efforts by politicians in Sacramento to rewrite Proposition 103 – including one in 2020, in the middle of the pandemic, when they thought no one was looking. We’ve held the Insurance Commissioner (which the voters made an elected post) accountable to enforce the law, and defended Proposition 103 in literally hundreds of legal proceedings.

But don’t think for a second the insurance industry’s war on Californians is over. Right now, we’re trying to make sure that insurance companies give back an estimated $3.7 billion in premiums that they unlawfully collected when our cars were sheltering in place during the pandemic. State Farm recently got a state Court of Appeal to declare that the Insurance Commissioner doesn’t even have the power to order refunds – a license to steal that we have asked the California Supreme Court to revoke.

We’ve also demanded that the Insurance Commissioner enforce Proposition 103 and bar insurance companies from surcharging motorists who don’t have a fancy degree or elite job – but the industry and its allies are trying to weaken the Commissioner’s resolve. Meanwhile the insurance companies are abandoning entire neighborhoods across the state. They want to be able to use secret algorithms, rather than your safety record, to determine what you will pay for home and auto insurance.

Your tax-deductible contribution today helps keep us in the fight.

It’s been a tough year for many, and there may be more dark days ahead for all of us. But I ask you to consider Proposition 103 as an example of citizen democracy at its best: together, we enacted common sense protections against corporate abuses and made government more open and accountable.

Which brings me back to the issue of trust. When I wrote Proposition 103, I was 35 years old. There’s only one reason I’m still at it: your support for Consumer Watchdog’s work, year after year, has provided the power and resources we needed to keep the insurance industry, other corporate interests and the politicians in line. Please renew that support if you can with a tax-deductible donation before the end of the year.

Your trust, in me and every one of us at Consumer Watchdog, remains our greatest honor.

Cost to Californians $10 Trillion by 2045 From Oil And Gas, Consumer Watchdog Reveals in New Report
END_OF_DOCUMENT_TOKEN_TO_BE_REPLACED